The fun soon goes away, for me haha. I’ve had maybe 10 CTD’s reported from the start of this beta. I will continue doing so over the weekend, but then i’m done. I did my part.

Besides that, i notice severe lag en stutters while planning a flight in World Map. And why can’t Asobo employees test it themselves, you can’t tell me they have no default Xboxes availabale at their office.

Can somebody give me a run through on how to download/ sign up to the beta testing?

When do you people think a fix/ update will be released for this?

I uninstalled all the marketplaces present on my Simulator. I tried a clean flight until the end without any sign of bug with this Beta mode. But as I approached the airport, the screen went black. Regrets are running through my head.

tried a clean flight until the end without any sign of bug with this Beta mode. But as

This Beta does not fix any problems and is not different from the public fs2020 Level. It does add some debugging hooks to the code so that error data can be analysed by MS/Asobo.

@SeedyL3205 can I test it offline to or do y’all just need online ?

I have this bug a lot on series s. I’ve found that if you turn external power on after engines have started it sometimes brings the flight display screens back on. Most of the time i get this bug is on startup, the screens switch on then switch off when the checklist moves by the battery options.

Hey guys, Series S player here who faces this issues frequently as well. I’ve made a few observations but be warned - this is not how you intended to play the game.

These are my observations - hope it helps anyone!

R u on Xbox beta testing

A new beta testing opportunity is now available which specifically targets stability on Xbox Series X|S. To help us better track some of the memory-related crashes on Xbox, this build will contain additional telemetry logging and a more precise memory tracking system. Any time you experience issues such as a crash on your console, extra data will automatically be sent to our team for investigation. This build is open to all Xbox users and will run until we can track down the root cause of the me…

I’m new to the forum and just saw this today but I will participate from tomorrow. 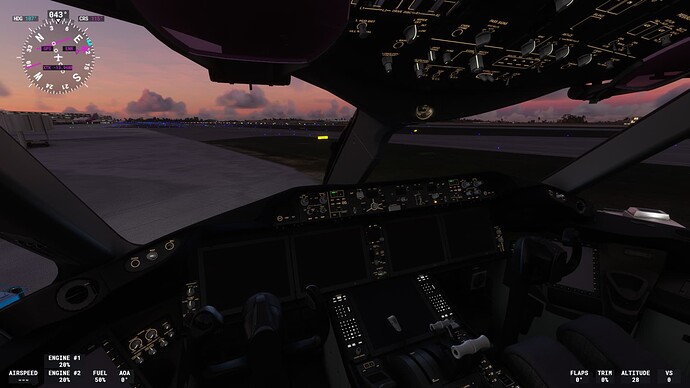 Ran a flight today from Abu Dhabi to Singapore. No issues for 7 hours but I forgot to put real time weather and air traffic. However this time I put real world streaming so that’s good;

This flight was in the beta. I hope the developers got some information out of it.

Only issue was black avionics once I was at the arrival gate. I switched to external camera to enjoy the airport view . Attached in the picture. This happened as the jetway was being connected.

Will keep updating any new findings here if appropriate and useful.

Now screens won’t turn on like KAtl and other airports

My recommendation for everyone is to uninstall handcrafted ATL and DFW, those airports are very bad optimized for xbox, all the time causing CTD/Black screens

Regarding the ongoing Xbox Stability Testing - we’ve received a lot of data on out of memory crashes on Xbox and are now analyzing the information and investigating a few different cases. The information we’ve received so far has been hugely beneficial to the team. Thank you very much for those who are participating!

Good news very good ! I won’t stop testing until you guys say it’s done . Thanks for the updates!

Quite welcome that MS/Asobo aknowledged our efforts and thanked us. What I’m missing in the short message is a perspective: is it still beneficial to continue and if yes what is the plan and specifically for how long should we continue and if yes, is there an end date? The communication as good as it is on technical details, seems a bit lacking the social component and understanding of what non-technical info and care we need. Above all we’re spending dedicated, personal and unpayed work for a commercial company.