Been flying around some more with the Mamu Marinas and that would be my number 1 now.

I would update my own items… but actually I’ve never voted on this chart hahah.

Back when I started it, I seeded it with about 30 things that I have used / tried / have permanently installed - and gave each 1 point just to get the ball rolling and show the kind of mods I wanted everyone to focus on.

Is it cheating for me to actually add 5 properly now? Lol

Is it cheating for me to actually add 5 properly now? Lol

Of course not, everyone deservers their top 5

Here comes a long overdue update to these charts!!

If you prefer this as a PDF, you can download it here: Dropbox - MSFS Mods Ranking (10).pdf - Simplify your life

If you need LINKS TO DOWNLOADS, I’ve put together a Google Sheet including all the mods in the charts here: MSFS World Enhancement Mods - Google Sheets

And FS DreamTeam’s GSX Pro lower down with just one mention for 1pt.

I finally incorporated my own votes into it so I’ll see if anything fancy comes out soon and hopefully be able to adjust mine.

I was going to put Marinas top but then remembered FS Realistic, sorry Mamu! I really can’t go back to flying without that as it sounds so empty and lifeless (plus the new head movement really adds to the feel of flying / landing for me) and as audio is there ALL the time, not just near water, I felt that had to be favoured by 1pt lol.

I REALLY LOVE the addition of piers and leisure boats though — it adds so much nice detail to otherwise bland areas. Great idea! Here’s is a random screenshot I took that shows how cute it can randomly look, ANYWHERE in the world! 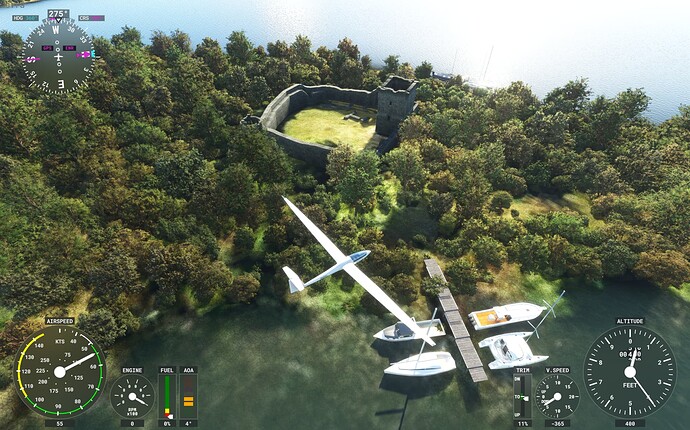 I found a phenomenal new couple of payware add-ons for the Plymouth area (UK). Probably only really of interest to you if you know the area but I am posting this here in hopes to bring more attention to it for the developer: RealVFR

Luckily I am involved in another topic here (about the UK Coastlines Morphing Fix mod by Taburet) where @TjejKalas mentioned this content, and I was really surprised that I had never heard of it (or the developer) before. Looks like they are a local (to me) company, or solo artist, focusing on additions for this area.

After checking out the videos and getting some feedback about performance from @TjejKalas I immediately bought both and been trying it out this evening.

Now I don’t usually have “Airport mods” in this chart but these are FAR more than that.

Each pack consists of around 40 square miles of improvements around, including unique models, ground textures, water masks AS WELL as the airports – all of a very high quality with great and dense detailing and texturing etc which blends very well to the surroundings. Up there with the best payware I have ever seen.

The Plymouth pack adds in the main (now closed IRL) airport EGHD AND adds a new grass strip. There are tons of custom models close by and the whole of the city has very good, mostly clear and not melted Photogrammetry with a great frame rate! It even has my car (in a slightly melted state - looks expensive to repair!)

The Salcombe pack has really nice ground textures, improves the cliffs, beaches and also adds a ton of nice details to farms and the airfield.

Just a shame flying under the Tamar bridge and road bridge there knocks the plane about a bit!!

Check it out and the videos on their website below and go grab them if the area is of interest to you!

I use only four;

Seems like this would make a good Google Sheet, with links included.

Thanks for putting this together though, definitely found some good ones!

EDIT: @TrentKama
I had a look and can actually make the mod title into a web link so that would be neat BUT hit a problem that some of those things are available from multiple vendors, so what single one would I link to?

Suppose I can link to the developers page (if they have one, only did the first few so far so not checked all) and from there users could find a store link perhaps.

Don’t really want to duplicate the whole table as is into Google Sheet (which would allow multiple rows for those that have many vendors) as I think it won’t be too user friendly to have to find the row you were interested in again?

I could do it alphabetically on developer name so I don’t need to keep reordering it to match the actual ranking order, so actually maybe this is a good solution. Let me think!

Still need to fill some blanks and check a few things (mainly if items are on MS Marketplace).

Gonna give it a try

Thanks for your entires

Yeah it’s pretty neat to have them sometimes but I wish they appeared in more natural ways (instead of repeating the same group and path so often in areas where they “live”) and wish they were a bit better animated (they kind of don’t look right, the way each individual moves/flaps etc).

Still it does add a nice bit of surprise and life to the world so yep, belongs on the list

Also number of times I’ve flown right through them, would be awesome if they actually caused bird strike damage but I know that’s asking too much hahaha

It depends wich one, near shores yes, the other ones are well animated, also (from a 3D artist as hobby) you do not want triple A game animation as that is a waste of polys and therefore frame rate

It is great to see them around occasionally, not so much when you fly irl, and near airports.

I was surprised by this addon and the developer seems to keep it up to date, unlike quite a few MSFS devs.

Yea I can agree with those points. Didn’t really mean the actual detail of each bird but the speed and patterns they move and speed of wing flapping loop would cost no more in terms of CPU overhead, but don’t seem quite right to me.

I got the British Isles and West Europe ones. Gonna get expensive to fill the entire world!!

next will be next sale ha ha some addons are too expensive really, in MSFS sceneries are okay-ish priced at least.

I’m probably as mad as a wombat for starting this, but I’ve been thinking about it for a while, so let’s see how it goes! Here is a Google Sheet with some of my favourite airports. MSFS Top Airport Addons - Google Sheets Let’s all add ours and see what comes out on top! It’s planned as a compliment to my other 2 Top Charts topics (Aircraft Addons and World Enhancement mods). I’m going to do it a bit differently to those though. Partly as a test to see if I can streamline my work for the pres…