2 wonderful solutions to resuming your flights after a dreadful CTD

Guys, I am happy to report that after SU5 hotfix 2 and subsequent updates from almost all the aircraft developers the number of CTDs has dropped to almost zero for me.

However, after all the lessons learnt during the early days when SU5 was unstable, I do have 2 very nice fixes for resuming flights and definitely decreasing the frustration and anger when we have a CTD in the middle of a long flight. You can also restore your flight on SimToolKitPro to log the flight perfectly as if nothing had happened. That retains the sense of satisfaction that is required after a long haul flight.

Solution 1: Use a replay tool like Flight Control Replay and hit the record button before final approach or whenever you like for a period of 10 seconds, therefore in the event of a CTD you can resume from that location and just load your replay. You can disconnect and take control of the aircraft very easily including the FBW A32NX

Solution 2: You can resume your flight in a beautiful manner without any software by using the methods described beautifully by the YouTuber ‘Easyjetsimpilot’ in this video: 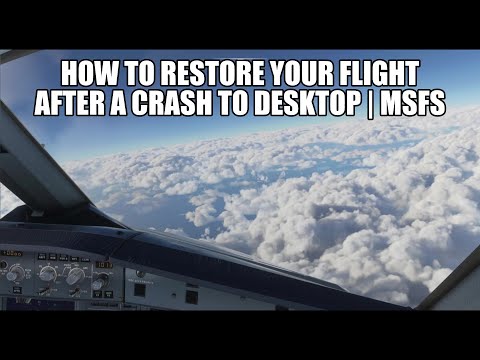 I was tinkering and I noticed you seem to be able to right click on the map to set a start point, which is quicker than doing it via the plan loader

I know this is pretty much an edge case, but I use OnAir for all my flights and if you do… if you were to have a CTD (Have had this once and it worked) then when it crashes… leave OnAir open and restart the flight sim with the same flight, but make sure everything is up and running and ready to fly and in the status you were in at the crash… ie flaps setting, throttle setting, A/P setting etc… then just use OnAir to slew you back to where you were when the crash happened and end the slew and resume the flight… Instantly back to where you were and what you were doing.

Just note that these suggestions might cause issues with more sophisticated FMS/System implementations (FBW a320NX, Aerosoft CRJ) since they have a big internal state which is not recreated with this solution.

since they have a big internal state which is not recreated with this solution.

Because they are not exposed to be saved & restored.

Ultimately, its probably going to be easier to fix the CTDs, but if some method o save the state of a complex train was developed, it would be a definite desirable feature for the more serious flight Sim user.

The closest I have come to saving and restoring a complex plane’s flight, is to put the PC into Hibernate, and then wake it up again later !!!

In the best case, MSFS would provide an API that the aircraft/avionics could provide their internal state (in whichever form) and MSFS would save it with the save file.
When loading a save, MSFS would then provide this state from the file into the aircraft/avionics and they could restore it.
Such an API would basically be transparent for MSFS, it would just be responsible of writing and reading it. The addons could then decide which of the state is relevant, which format etc.

With addons getting more complex, the current save/load feature is basically useless.

But I got carried away a bit. External tools that record the state of the sim for replay surely wouldn’t benefit of said API since reading/writing the internal states of complex addons multiple times per second wouldn’t be feasible, I guess (but it would make the most accurate replay possible ;)).

At the moment, those internal variable are not exposed.

ie Internal states of the AP …

Don’t get me going on the Auto-Pilot !!!