Hello everyone, hope to find a solution to this…

With my previous 2080ti I was getting the same FPS, so its not normal.

I play on 1440p resolution, I’ve also tryed the new DLSS option, and I get around 40/50fps on the ground, not much more. Everything is set on Ultra and best quality, ground resolution on 200.

Thank you very much in advance.

You basically already gave the answer yourself: you ARE in a fully CPU limited situation, illustrated by the fact that neither a more powerful GPU nor DLSS results in more FPS.

CPU usage you measured by simply looking into the task manager, correct? On a multicore CPU, due to the fast thread shuffling by Windows, it is almost impossible to have meaningful readouts, especially not if you look only on the overall CPU load instead of per core. Imagine a quad core CPU with one core at 100% and three cores at 0%, you will get an overall CPU usage of 25%, yet you are already fully CPU limited due to one core being hammered…

BUT: you 3090ti power is not at a loss, simply invest the overhead into image quality, for example by using higher resolution scale, higher settings (if not at ultra already anyway) and such.

In my case for example, with a 8700K, I am even more CPU limited and I invested my GPU overhead (RX 6900 XT in my case) into resolution scale, now running the sim at 1440p with 130 resolution scale, giving me a super crisp and clear picture without a single FPS loss.

Moved topic to #self-service:pc-hardware,
as the issue does not seem to be a bug.
The situation seems exactly like @AnkH828072 described.

There are several other topics with similar issues, which may help you:
E.g. https://forums.flightsimulator.com/t/low-cpu-usage-low-gpu-usage-extremely-low-frames/449324

Hello everyone and thanx for your reply.

I’ve attached a screenshot with task manager open and the FPS counter on top right, It doesn’t seem that my CPU is under heavy load, but please tell me if I’m wrong. 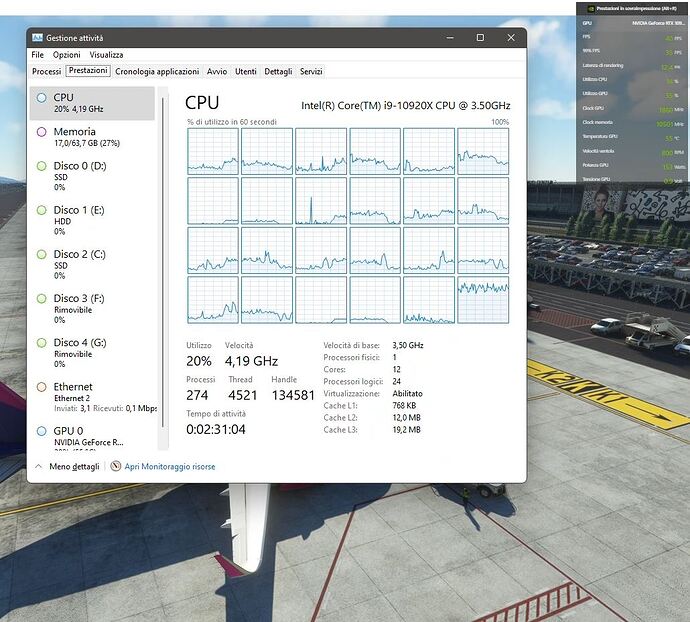 You are wrong, as already said: it is that simple, if your GPU usage is below 90%, you are most probably in a CPU limitation. On your screenshot you see the one thread/core on the lower right side of the panel being hammered. I guess this is core 0, so a classic situation for MSFS.

@AnkH828072 is right. For testing, lower your TLOD which is CPU heavy, E.g. by step of 25, and you’ll see your last core usage going down, and your fps going up.
The granularity of the Task Manager is not enough precise to catch 100% usage peaks and display them. You are too close to the Max, so probably you touch it often between 2 display of the Task Manager.

@AnkH828072 @CodeLoran69 Ok thank you very much, I’ll try to tweak some settings

The bottom right is the Core 23

It’s often the last one with MSFS.
Just look what I took yesterday, and from the MSFS menu. I didn’t posted it yet to complain about this behavior as I want to do other tests before: 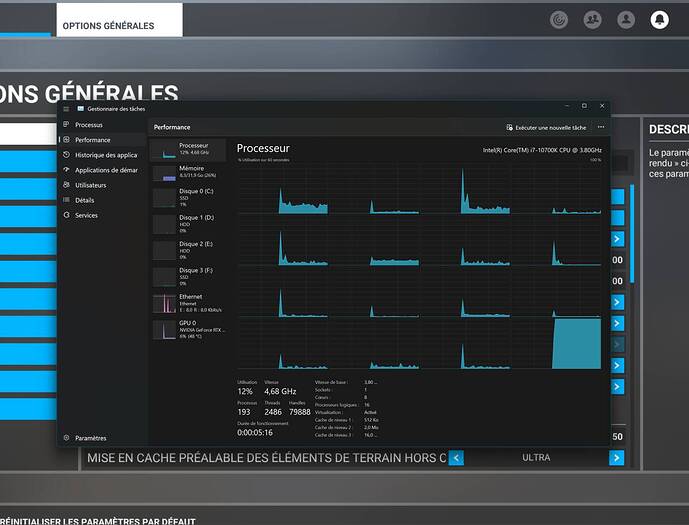