A question for Private Pilots based in London, UK

Hello. Just wanted to ask, how feasible is it for you guys to ever fly VFR?

I see that London TMA has Class A airspace beginning from 2500ft. Then, you have 5 major airports to contend with. And if that wasn’t enough, you have to rely on the “Great” British weather to remain VFR throughout.

I’m looking at particular airfields such as Denham, Elstree, Stapleford, etc which all have plenty of small, privately-owned aircraft parked. It got me wondering, do these guys get much of an opportunity to fly freely and without a filed flight plan?

Curious to know if this applies to anyone here and how you go about your business.

Yes we can fly VFR in the UK, we can even have guns as well

Not a pilot, but I checked out my local flying club and looks like they want you to fly at least once or twice per month, the more the better because of safety worries if you don’t fly enough. I was wondering how feasible this is in the winter when it’s constantly cloudy or rainy.

Do you remember when that Icelandic volcano erupted a few years ago and the resulting ash cloud grounded all commercial flight in Europe?

Well GA was unaffected and, for that week, tower controllers at Heathrow had to contend with pretty much every GA aircraft that came within 20 miles requesting a touch and go on the main runways.

You can VFR in Britain, just don’t be afraid of controlled airspace.

Southeast of England doesn’t have anywhere near the amount of rain many people seem to think.

Once upon a time I used to fly in a WW2 air combat sim quite a lot and, as you can imagine, a lot of the pilots in the game were WW2 history buffs. However, the myth that it’s always raining in Britain is so prevalent that I once got asked by an American fella who was thinking about doing a driving tour of Britain if the weather would be ok enough in September or should he come earlier in the year?

I said…The Battle of Britain, you may have read about it. Ya know it took place mostly in August/September/October 1940, right?

Turns out Americans really do think Britain turns into a pea-soup on the first day of Autumn.

Hahaha I was on a commercial flight to New York on that day … passed through that part of the world before the eruption but a 4 day trip to USA turned into 5 weeks. Cost me a small fortune.

Good point about controlled airspace … and of course many of us learn to fly from class D aerodromes, Back in the day when I did my training there were as many tyro controllers as pilots - made for some interesting situations!

Its difficult at times

My flying club operates a policy of 42 day’s, so if a licenced pilot does not fly at all within that period they would need a check flight with an instructor before flying solo. For newly licenced Pilots that period drops to 28 days.

It can be challenging to remain current with the great British weather, but I think its a great system as you point out safety first at all times.

I got my PPL at Denham/EGLD many years ago - it now sits in a drawer at home, gathering dust, but that’s another story

Denham’s ATZ is mostly inside Heathrow’s TMA and is only up to 1000 ft. We could only depart to the north or arrive from the north. the further you got away from EGLL’s TMA the upper limit of class G airspace increases in steps. Imagine your airport being located near the tip of an inverted step-pyramid.

Weather… can’t add much to it. The winter months were usually wet and windy so not much flying happening. Added to that: Denham only has a paved runway, the manoeuvring areas are all grass and are prone to waterlogging.

I’ve flown something over 8000 hours, half of them in the UK flying military and police helicopters, mainly VFR. Some of the police hours over London and again VFR, at weekends in the south east it’s often a relief when it gets dark and most of the GA VFR aircraft are on the ground and the TCAS can have a bit of quiet time!
The Heathrow zone does create choke points at its corners with GA aircraft skimming around it watching the magenta GPS line, the same goes for London Stansted although they’re very accommodating with crossings for VFR.
In summary GA VFR is alive and thriving outside the Heathrow zone (Pandemic allowing).
The weather is generally fine, average cloudbase 1500’ and above if there is any. Probably lose 10 days a year due to very poor weather. The south east is very dry, sometimes 6 weeks without rain in spring to autumn. Completely different to the west coast and Ireland.

I have also flown around 150 hours in the UK under VFR, weather permitting it is extremely pleasant.
Now during Covid times things are difficult, government regulations are strict and many pilots struggle to maintain their rating. Luckily they changed a few days ago to allow flights from 29 March.

Thank you for all the replies. Interesting to hear how many VFR aircraft movements there still are in this rather limited Class G airspace.

I got my PPL at Denham/EGLD many years ago - it now sits in a drawer at home, gathering dust, but that’s another story

Out of curiosity, did you have to fly outside the London TMA in order to climb high enough to learn about leaning the mixture, etc?

I flew from Blackbushe (EGKL) for several years, about 5 years ago (so things may have changed).

You have plenty of VFR even when my airfield was about 10 miles from Farmborough. I used to call Farnborough radar for basic service but from there is pure VFR but with passive monitoring that it may come handy for traffic info (temporal upgrading) , they may send you alerts proactively or if you really get lost they can help you as you have a transponder assigned.

To transit east you have the north gatwick corridor using the Biggins VOR. Outside the TMA London you can do whatever you want limited by height and some restricted zones (specially militar areas). Crossing south-north the TMA through the middle only available in the East via London City Airport (B Class) if the controller allows you, otherwise from the west via Reading was the easiest option based on my home airport.

There is a height restriction in most areas (remember that you have a big bunch of international airports packed, Heathrow, Gatwitck, Luton, Stansdtead) but in order to go higher I used to go to the south, even over water among the channel where you can easily fly at 7.000ft just contacting the London FIR (in my PA28 was taking forever though

In the south it does NOT rain a lot, but you may have the cloud base at 2.000ft limitng the VFR and fronts move very quickly as is an island. Its very common to take the IMC rating (replaced by the restricted instrument rating) that it is a lightweight version of the IR which allows you to cross the cloud base to look for some blue sky at about 2.500 (lol), also allows you to do ILS apporaches in cases that you need it.

Get the VFR maps which are very detailed and really well organized, they looked packed with info but when you learn how to read them is very easy. 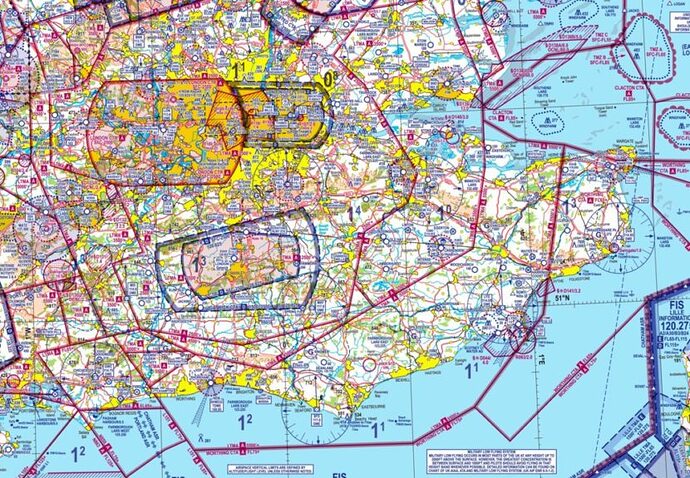 I fly at Wycombe, to the south we of course avoid due to LHR, but to the north is nice and clear for us

Get the VFR maps which are very detailed and really well organized, they looked packed with info but when you learn how to read them is very easy.

@SavvySigma we usually flew around somewhere between Aylesbury and Westcott for all the exercises.
When it was time to practice steep turns, my instructor made me do them somewhere above Aylesbury so he could spot where one of his friends moved to

It is very easy to fly VFR in the UK despite so much is controlled.

If its not controlled civil airsoace then there are dozens of military zones to contend with.

Our mountain areas have their own dangers with our RAF using them for training.

I was tootling along one day heading into the Lake District at 2150 feet (never flew whole numbers, safer flying otherwise) when a RAF jet went balistic 1/2 mile in front of me.

That is the beauty of MSFS, you can fly anywhere VFR. No way any UK GA Pilot would fly over major towns and Cities without just cause as there is no where to put down safely in case of engine failure.

There are also aero charts which are valid for VFR up to 5000 feet, they do not contain controlled airspace above 5000 feet which makes them less cluttered and better for use in the cockpit.

I took an introductory flying lesson at White Waltham which is just a few miles from Heathrow many years ago. I can still remember seeing big 747s flying past not far away as they were coming into land. Had a good instructor with me but on my own I would have enough to worry about flying the plane without a major airport just next door.

Nice. I used to have a ZXR400 that suffered from carb icing, although I never had to put her down in a field as a result.