Sounds good. I never tried the mod but if it really mutes the expedite line i might give it a go.

Thank you so much! Indeed that was.

Just finished a flight with lots of AI around me, and I didn’t hear a single ‘Expedite…’ throughout the whole flight - so much less annoying…

Does it only work in Europe though?

If you use Offline AI Text to Speech, you can edit your own local language LOCPAK located in the Official\fsbase to reflect that line.

Except that Offline AI Text to Speech is gooched, and anyway the voices sound like children

Thank you for what you do for the community. You could charge a lot of $$$ for this amazing add-on. But you decided instead to give your time and your work for free. Anyone who is complaining here has some serious personal issues.

I don’t see any complaints about AIG here.

Anyone who is complaining here has some serious personal issues.

All we are doing is pointing at a problem and trying to find a workaround. I haven’t seen any hostile post for quite a while.

No more headache in busy airspace. Another MSFS workaround on the list.

Has anyone had any double traffic at airports.
I’m at TFFJ and I have 2 ai planes with the same route. 1 is showing as AI000 and 1 as SBU122. On flight tracker there is only 1 plane showing.

Is it possible for the AIG team to speed up the AI planes after they land. They take so long to vacate the runway. Or is this something only Asobo can fix.

Asobo. It has to do with the coded taxi speed.
In some of the older sims there was an addon that could change that.

I’ve switched over to offline traffic to give it a go.
I’m running out of TNCM Island hopping. The local routes around are from Winair and St barths commute which I have loaded in ai manager. I’ve got traffic controller loaded and set to inject traffic but nothings loading up. I’ve noticed that these flight plans don’t have any models attached in AI manager, would that be the reason.

Do you ever see any general traffic flying about with this? I have seen many airlines and multiple plane models. But I haven’t seen things like Beechcraft or cessnas or anything like that so far. SO ive been flying New Zealand but expected more general traffic.

I have installed most of the available airlines in AI Manager.

I don’t know if the models are there, but have you clicked “Verify Setup”?
That will bring all updates into the manager. 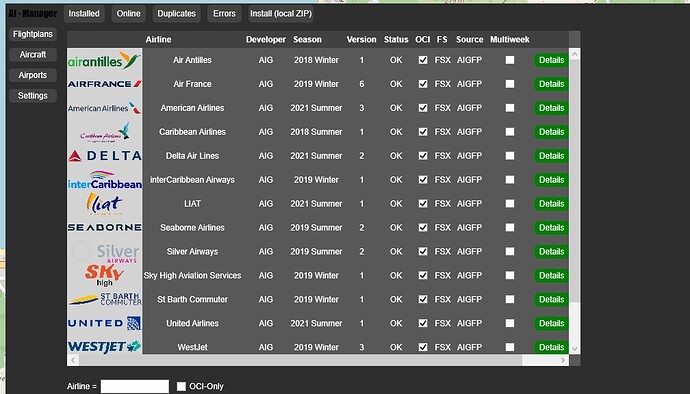 I have the following installed which all use TNCM. With Live traffic I get the AA, Delta liveries show up but the rest use a generic model. Nothing with offline traffic though.