Dont post that oftern but after installing AIG Manager etc it has transformed the game… so many people put so many hours into 3rd party works … well done to all. 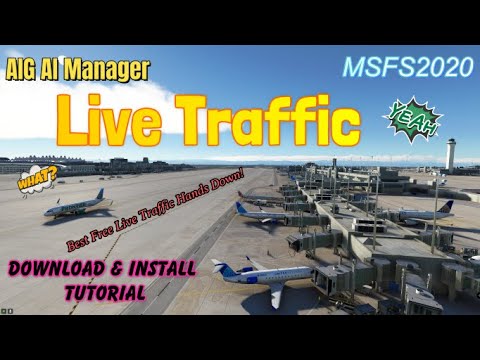 It is a very cool addon. Could be a little more userfriendly but maybe after beta. But when it works it is very realistic and improves the game.

has it’s problems but absolutely LOVE it!

Yes, I agree. There was nothing worse than starting at a big airport and seeing no planes moving. This app brings airports to life.

I’d have to say that for a beta version, it works much better than I expected. The install is definitely not “drop it in Community and you’re done” but it’s not too bad.

For me, it does slow down the game and with installing a load of plane liveries (took me 6hrs) i still see a lot of strange airplanes. Especially at airfields like st Maarten Juliana where i see tai airways or ryanair despite downloading every available airlinerthere is to land there. I even had a A380 there??

AIG has revitalized my major airports…a must have in my opinion !

That due to the limitations of MSFS,PSVwally.

Without 2020 Fs’Ers video I would have found installing this mod next to impossible - as it is I’ve spent the best part of a day installing, downloading files and checking. In comparison the supplied PDF Instructions are almost useless unless you’re a real computer buff.

Up to now have only managed a quick check at my local airport, (EGNT using the ORBX addon), but as promised there were lots of correctly identified aircraft parked at the gates. No moving traffic during my brief check but already very impressed and there does not seem to be any effect on sim performance.