I doubt that @airjuneau is talking about the same strange hardware issue you are experiencing.
I’ve never had this hard left turning tendency with my T16000M.

Check out if you use the “modern flight model” (check it in options). I have heard people describing the exact same behavior and the culprit was the legacy flight model

I’m on modern thanks.

What happens if you spawn in midair?

Did you notice that there are numerous threads about problems with CH yokes?

CH Flight Sim Yoke USB is detected by the system & is properly calibrated. All axis & buttons function in other games including FSX. In FS2020 the Flight Sim Yoke USB is detected but inputs are not working for actual game play. When I hit the “Sensitivity” button in-game, the axis inputs all appear to function (see attached). However, when in the controls mapping dialog, the inputs are properly mapped but no motion of the yoke or throttles is detected. During gameplay, no control surfaces move & …

Of course you won’t find the game useless if it works for you!

Did you try my suggestion of spawning in midair to see what happens?

I did try spawning in the air just now. It flies straight for about five seconds and then back to the same old extreme roll left and dive. Again, the ailerons, rudder and elevators are perfectly level (as viewed in external view) when it does this.

And again, the sim worked fine for months for me. This just suddenly started happening with no change to my peripherals or anything else - just game updates.

It’s obvious that there’s a hardware problem. Why do rule that option out?

Yesterday my USB extension cable failed. It took me hours to find that one out.

Because I have unplugged everything and it still happens just using keyboard controls.

And obviously it’s a simulation bug that only affects you, since I don’t see this behavior at all. Microsoft must be out to get you.

Mine was doing it, too. I calibrated the stick in Windows. All’s right with the world.

But he’s proved that it’s not a hardware problem.

I calibrated everything in windows too.

This strikes me as the issue: 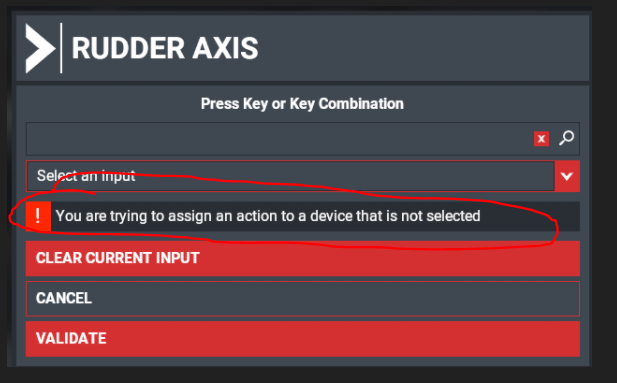 Even if I attempt to reassign keyboard keys to anything, I get this as soon as I click in that box ( I can manually select keys through the dropdown though). Even with all peripherals unplugged. The sim is seeing something that is not there.

Zendesk have not even acknowledged my ticket yet. What a jip.

@mdapol I’m pretty sure this is what’s causing the issue.
Especially since @spybaz wrote that The sim is seeing something that is not there.

And again, the sim worked fine for months for me. This just suddenly started happening with no change to my peripherals or anything else - just game updates.

He said it. Not me. I always agreed with you that it’s a hardware problem.