So looking on how some reports are coming out on this new CPU. It sure looks like this could take performance on MSFS to a whole new level. Since MSFS is very heavily dependent on single thread performance and the new AMD zen4 is very good in this, it should solve many stutter problems no??

I’m sure it will give people more headroom to main thread limits, but I hope the fixes for stuttering aren’t just throwing more $700 CPU’s and $250 motherboards at the sim.

They haven’t announced a 7800X yet. It’s been suggested by some tech reporters that this could mean they’re holding off and eventually releasing a 7800X3D variant with the V-cache much like the current 5800X3D which would be their gaming powerhouse.

If this happens, this would be the CPU to get for MSFS. Sure the 7950X is going to be amazing, but if you’re buying it for the sim, it’s a waste of money as all those cores are doing basically nothing. It would be better to have fewer, faster cores instead.

In any case, I’m keeping my eyes peeled. I’m waiting for next gen GPUs and CPUs in order to build a dedicated rig for my sim vs running it off my main system. I’ll wait for comparisons on which serves my purpose better - AMD 7000 or Intel 13th gen.

Many people have, especially since the 5800X3D already blows the 12900K out of the water for MSFS. There’s no problem with AMD CPU’s and any GPU’s.

And many expect the that the unannounced 7800X3D will do the same to the 13900K. That assuming, of course that there will be a 7800X3D. It’s still speculation at this point. They may wait until the 13th gen Intel chips are out to launch this and put Intel back in second place.

But I have to say, these are exciting times when it comes to CPUs and GPUs. The stagnant performance increases we saw from generation to generation for about a decade when Intel and nVidia were without competition were painful. I’m loving this competition.

I’ll maybe look at them in a years time and see how many bugs they found/fixed. They’ve only just pushed the bios update a few months ago for the current generation to deal with stutters so no way I’d dive into whole new set of potential problems In day one. Current hardware is more than capable once the game is fully optimised.

Really? I was under the impression that the 12900K was better than what AMD currently has.

5800X3D is the undisputed king for MSFS. That L3 cache makes all the difference.

Intel are slightly better than the regular AMD lineup. 5800X3D murders anything Intel has currently.

If it only comes down to getting 120fps instead of 90 I wouldn’t see any difference anyway and I would much rather blow my $1000 on something more useful; beer for example.

Slightly better enough to justify more power usage and more heat?
Have only used intel but am considering the switch to amd for more efficiency,

benchmarkers will test in CPU limited scenarios, in this case, that means testing at 1080p (making the GPU a non-factor).

Yep, I’ve never understood why they do that, such comparisons are as much use as a chocolate fireguard.

Yep, I’ve never understood why they do that, such comparisons

Benchmarking at 1080p is almost always CPU limited, which is why they do this. If you tried brnchmarking CPUs at 4K, all the results would be the same as you’re almost always GPU limited at these higher resolutions. MSFS is the exception to this rule of thumb.

This is what a GPU limited benchmark looks for processors: 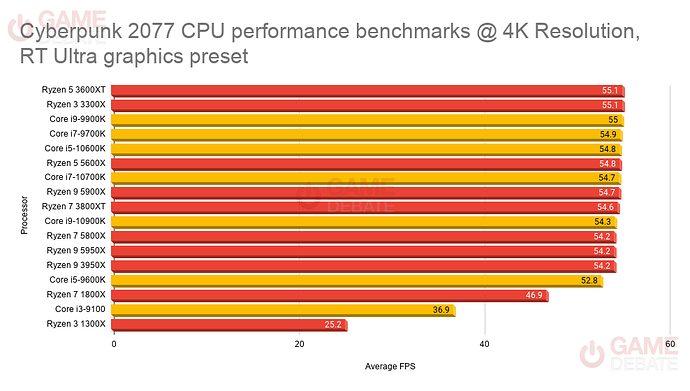 the problem it is not how good or expensive it will be this next gen amd cpu’s, the problem is that every three or four months microsoft and Asobo updates the game and who knows the performance of the game will be better or worse. here you have to add a new motherboard, DDR5 memory…possibly a better power supply …etc, in short a price for anything affordable for many pockets. And to all this let’s hope that Asobo and Microsoft do not break the performance in these updates.

Hmmm although my 3800x isn’t specifically mentioned and I don’t play Cyberpunk I think that chart probably helps explain why I am so happy with it.