An Appreciation to Asobo Studios

Thank you for the years of hard work you put into redefining this visual masterpiece of flight simulation software. As a graphical flight experience, soaring around the globe it is breathtaking, nothing can compare to the out the box visuals of MSFS 2020.
When the legacy chapter of MS Flight Simulator is written, your team will be remembered for taking the flight sim visual experience to the NEXT LEVEL! Thanks, and onward ever… 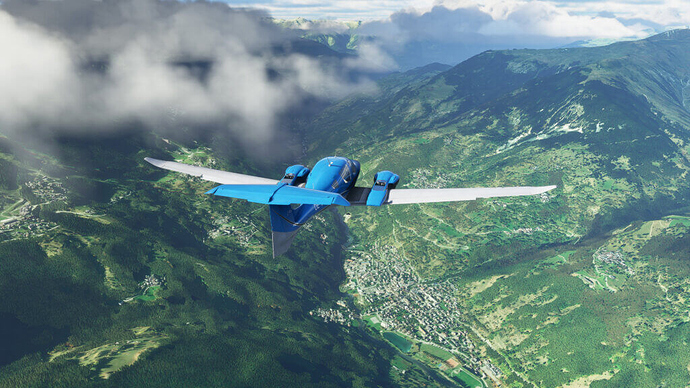 Pretty yes, but for me they’ll be remembered for releasing before fixing a terrible and buggy program and they should be ashamed of themselves: notwithstanding their paymasters ordered it so.

I doubt the decision to release it was their. it was a marketing decision, so from MS.

My last 6 words said this!

It’s not “terrible”; thousands and thousands of people are enjoying it every day. Try to appreciate the good once in awhile instead of just focusing on the negative; it makes for a happier life.

Hater and complainers will always be just that. They look at life and find the faults instead of the beauty. The sim will move on payware will be added and they will eat their words

And face the walk of shame back to their pc to boot up 2020.

Oh I have no problem with its looks, it is mostly beautiful. Pity it flies like a brick!

First I heard of Asobo was when I played their A Plague Tale: Innocence! That game was awesome! To the point that I want to name my daughter, if and when I have one, Amicia!

If you haven’t heard of this game yet, check it out: TRAILER.

I think they’re a great studio as far as these two games are concerned!

I haven’t found any issues with this that were not also issues with other flight sims when they released. Heck some of them still aren’t fixed years later. I think some expected far too much and are let down. And others have legitemate gripes, there are some issues for sure. But we have people talking about the sunsets not being realistic enough!?? Really people.

Pesronally I am impressed with it and having quite a bit of fun.

I hear where you are coming from but it’s a little harsh on the Asobo team to say they should be ashamed of themselves. Particularly as you acknowledge that it is likely that decision was made elsewhere.

Whether any of us like it or not there are commercial realities and pressures that would no doubt overrule the advice of those at the sharp end of the development process.
The clock for release was ticking as soon at a Flight Sim was made public.

Was the sim “finished” as much as it should have been?.. probably not.
Would it have been significantly better a month later I.e. next week… again I think probably not, it would still have numerous issues that would be hot topics of complaint.

What is really encouraging is the focus and effort Asobo are making in addressing the most pressing issues first and releasing patches in a timely fashion. So rather than say they should be ashamed I think they deserve the recognition for what they have achieved and a little appreciation for their continued efforts.

Maybe there were too many issues at release, but the future of Flight Sim is looking very promising.

Look how quickly this thread was hijacked by the negatives

There are some seriously sassy simmers out there that have nothing better to do than scrutinize other people’s work. I love being part of the flight sim community but have a feeling that if I was ever fortunate enough to go to FSExpo or another convention, I would run into a bunch of pessimistic ding dongs.

Love the title. Instead of hijacking every positive thread, there should be a dedicated sub-forum called Pessimistic Ding Dongs where they can freely vent.

A Dead Sea forum, for all the salty cats and dogs out there. Or a Low Sodium forum for those who’d rather discuss opportunities for improvement for the sim than endlessly ■■■■■ about it.

THANK YOU!!! Get so tired of the complaints, I too am thrilled with this. Asobo folks - ignore the haters, job well done, keep up the good work!!!

Exactly! Thank you ASOBO for the hard work. Unlike some users, because of my past in other sims including old flight simulators i am more patient (FSX and Xplane disciplined me well). As long as promises kept i am enjoying it.

Thank you for the excellent sim !

Look how quickly this thread was hijacked by the negatives

I would say look how silly it is for people to start a post to heap praise on MS/Asobo for the umpteenth time. This game has one thing superior to others. Scenery. That’s about it at the moment. When it behave more like a PC Flight Simulator I will give praise. Until then we have an unfinished game to play with.

Agreed with Nirgal2776 - Asobo is handling development, while MS decides release dates, pricing, etc. As a developer, I sympathize with how the folks at Asobo must have felt when the release date was published.

In all, I’m thrilled with Flight Simulator’s potential, especially given the Patch 2 announcement. Yes, haters are gonna hate, but it is not a “terrible” program, just rushed due to a hard release date.