Please can you link to your post showing side by side comparisons? People are just posting what look like perfectly normal shots and saying “look its obviously downgraded”. These things are very subjective and you need to compare like with like (as the posts linked above do).

So I think I’m OK with what you say, other than

that you are going the wrong way.

I mean I’m not choosing to go any way, I’m just enjoying the sim. And I decided that whilst a 3090 would be nice, the bang for buck was just beyond palatable for me.

I’m sure there are more powerful PCs out there with bigger GPUs and more memory and 4k or 8k or whatever. Of course I’ve no idea what it looks like on those. But on my rig, which I think is definitely in the “not bad” side of things, I’m not seeing the degredation that others claim. I’m not seeing many people posting screenshots “before/after” or even just “after” to illustrate it either. I;'m not saying it doesn’t exist, but I genuinely don’t know what it looks like.

Anyway, I’ll get back to enjoying myself flying.

They aren’t dumbing the visuals down, these changes are just temporary and they alread said they are planning ultra PC settings to push LOD well beyond the current 200. Just be patient.

As for the airliners, Jorg has said that at present (first couple years of develpment) Microsoft/Asobo couldn’t focus on airliners but created the SDK so that third parties could build study level airliners for those that want them. This is a ten year project and they can only do so much at once.

If you’ve already spent thousands another fifty quid or so for a study level airliner is a drop in the ocean for you.

Ultimately it’s simply false to say the sim is visually downgrading itself. We get world updates every couple months, significantly improved terrain elevation data, custom POI’s, photogrammetry, an ever increasing number of third party adds on and mods etc. My sim looks far better now than it did last year.

The LOD issue will be fixed shortly, as will the clouds and other issues. Just be patient.

OFC its ok to tell complaints when things are bugged

But they said yesterday that today we would get a patch, and we know all that will be fixed

Would it be possible to people to calm down until the patch is out?
its not like we have to wait for SU6 in 2 months… we’ll have a fix in less than 30mins

The refund and law suit threads should all be merged into one.

I did not say that you are going in the wrong direction, I would never allow myself to offend a person.
Mine is a simple debate, nothing against you, or against your hardware, God forbid.
I am lucky enough to have a computer shop and therefore the hardware costs me less and having experience in the sector I can distinguish it better.
I repeat against you I have nothing and I apologize if I wrote badly, I do not write English well and I use google to translate.
I’ll just go back to repeating that those with better hardware see worsening, those with less powerful hardware see improvements, this morning a customer who has a 2060 was very happy, so there are improvements on the one hand, but unfortunately some things have worsened and I don’t think that with the patch that will be released soon the best, because in fact they talk about improvements in other things, not graphics.
I also agree that the important thing is to have fun, but these worsening do not make me have more fun even if whizzing with the MB-339 airplane of the “tricolor arrows” in the middle of New York with more fps for an Italian like me is more spectacular.

Well to counter as an Xbox player of what is a pic of entertainment, I did not pay for 500 elitists with the high end pc who are bemoaning because they are not king of the hill and their dam joystick does not work. Well take a pill, chill and let ASOBO do their work

Well, by popular demand (OK, pretty much no demand), I’ve put together a pre SU5 v post SU5 comparison side by side video. Before I went into the beta testing, I recorded a video of a short flight from EGLC to EGLL flown by Charlie the less-than-competent AI Co-pilot. I’ve just recreated that video now and stuck the two together.

I did my best to recreate the same video. However a couple of points to note:

Other than that, here it is (HD version will be along shortly - blame YouTube for the slowness). I make no comments on this, but am expecting the floodgates to open as people pore over this with a magnifying glass… 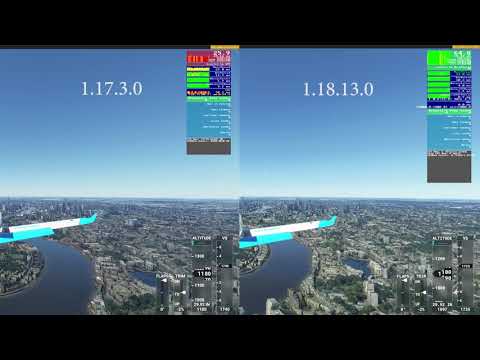 I also agree that the important thing is to have fun, but these worsening do not make me have more fun even if whizzing with the MB-339 airplane of the “tricolor arrows” in the middle of New York with more fps for an Italian like me is more spectacular.

Maybe my only question would be what proportion of people have a better rig than mine? Obviously you are one and there will of course be others, but without bragging about it, I spent a fair amount of money on my hardware and I’m not sure there will be a huge proportion of the user base with better overall kit. That suggests to me that many many more people will have seen an improvement than not.

Very nice job. Initial comments would be it looks like either your photogrammetry cache was prefilled in the first video, or maybe just bandwidth is reduced now, as you can see photogrammetry loading in on the second video. But that is hardly new.

You can maybe detect some reduced antialiasing in the second video. But bear in mind you have an extra 20 fps in return so you can maybe bump that up in the settings to compensate.

I mean in places you have even more fps gain - maybe 2x fps, and extra 30 frames.

Im just not seeing the reasons for peoples (other peoples) mass hysteria here.

I somewhat agree about Xbox been shoved down the throats of PC users. For example, I had to delete 15Gb of Xbox related stuff like tutorials and liveries that I do not need. Then I go on the menu and discovery flights have taken priority over the world map which is fine for xbox, but in my opinion that should stick with xbox and not be forced to pc. In my opinion the PC version has turned more into a game this update. However, I still think the sim is great and can be used not like it’s not on an xbox.

Its maybe tiresome for some, but this forum is a reflection of the emotions people have with this sim. And hopefully developers feel theses emotions and take them serious. I thought they said we would grow together, and growing up involves many emotions in both sides.

maybe just bandwidth is reduced now, as you can see photogrammerty loading in on the second video. But that is hardly new.

Agree - not sure if this is related to the scenery LODs or something, but it is noticeable. I don’t run a rolling cache, so don’t think that was a help before. I’m guess bendwidth at the server end

extra 20 fps in return so you can maybe bump that up in the settings to compensate.

Yeah - they are all maxed, although I could turn up render scaling a little (it’s at 100 right now)

I mean in places you have even more fps gain - maybe 2x fps, and extra 30 frames.

Yep, the gain (and smoothness) is huge. I thought before it wasn’t too bad, but when you see them side by side, the smoothness it what really strikes you