Is this a quiz or a question? The P-factor will work reverse in dive and become a right turning (yawing) tendency.

no! p-factor will stop as far as airplane get ~0 aoa! p-factor will move left only short period when you push the stick. that’s all. no p-factor no g-recession. in the other hand if you will push stick all the time you very fast will in vertical dive position. p-factor works only at aoa more or less than 0… or hellcat for dive at 15mp 2000rpm need to be pushed all time in the dive as showed in video?
p.s. sure that’s was question. i don’t know ■■■■ for quizing

i have one idea. probably that’s left trim not for compensate something, that’s just helping to dive at that set 15/2000 when you push by trim tabs ruder left, that’s gives you some down vector i don’t sure it’s p-factor or g recession or together.

you see? you thinking same as me in one dimension left-right. and there we made mistake. but p-factor works not only left and right it’s same works down and up. so when we give left leg airplane go down same as we can add some vertical aoa we can add some horizon aoa where p-factor will perpendicular, in that case it will looks down

I uploaded a few more paints for the Hellcat: 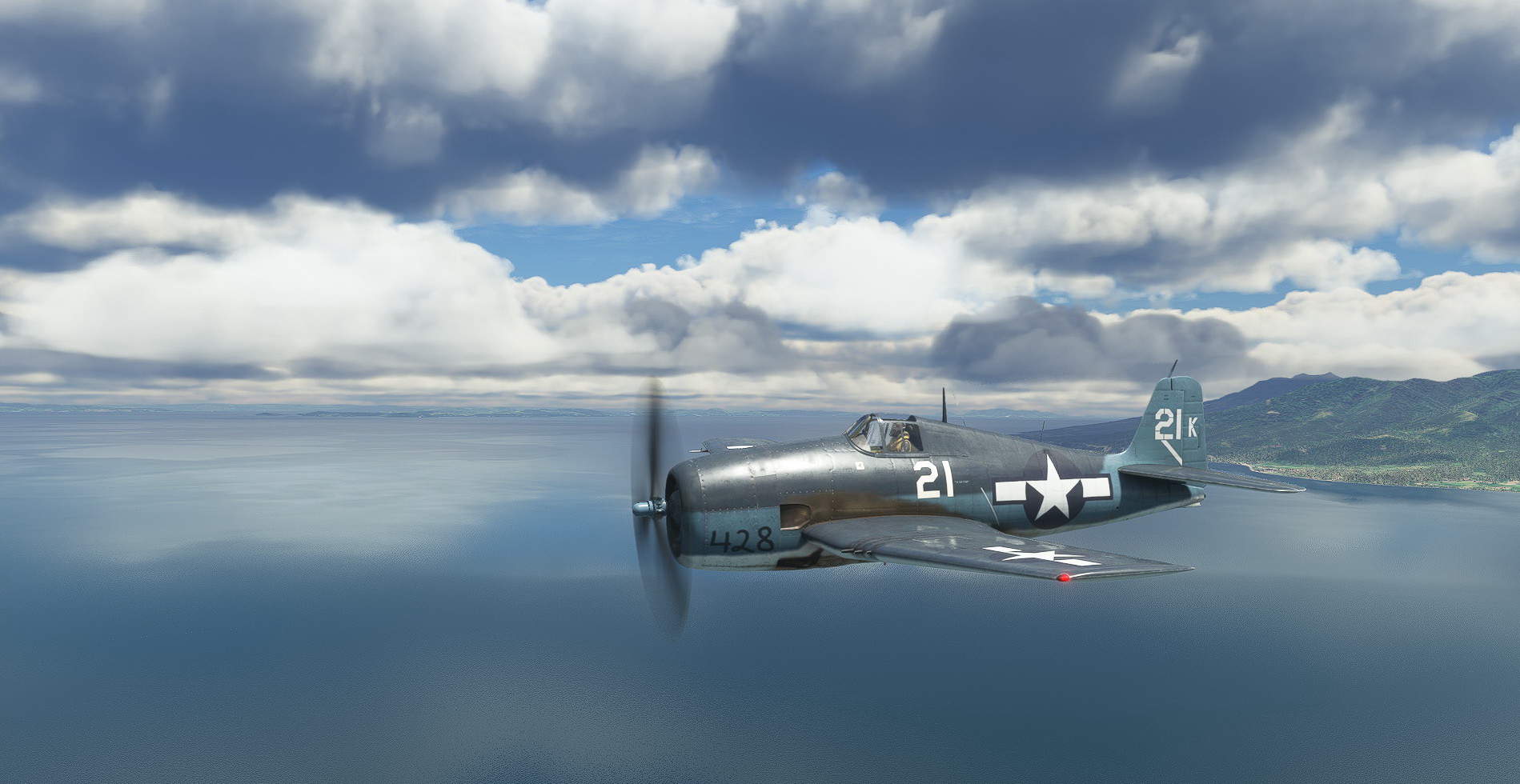 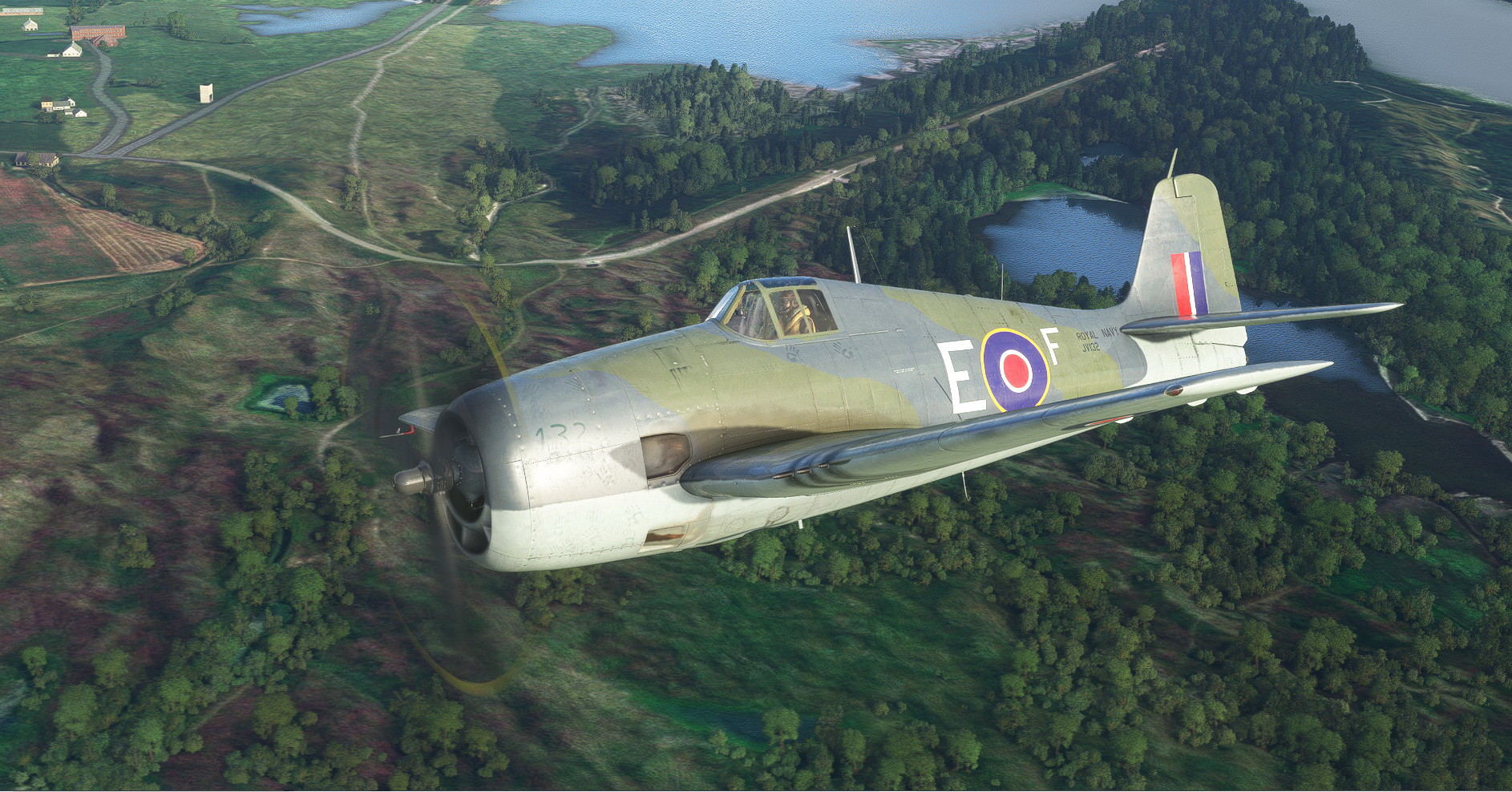 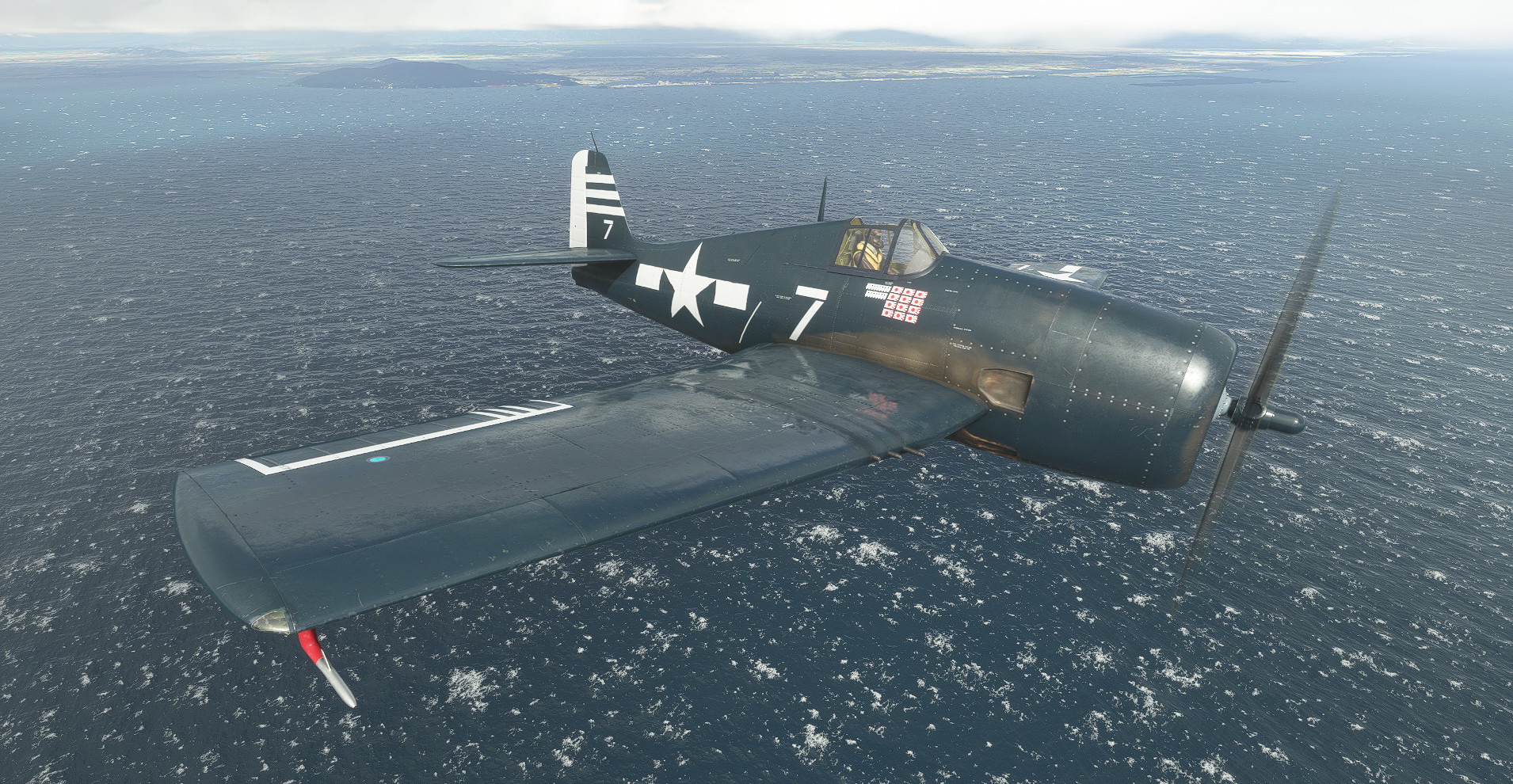 I discovered your liveries from the P-38. You do great work. Keep it up and thank you!

Yeah you are right. I though that in the low power very high speed environment P-factor would mean offset drag rather than offset thrust, but that can’t be it. Probably there’s some aerodynamic assymmetry built into the plane that becomes apparent at low power and high airspeed instead? 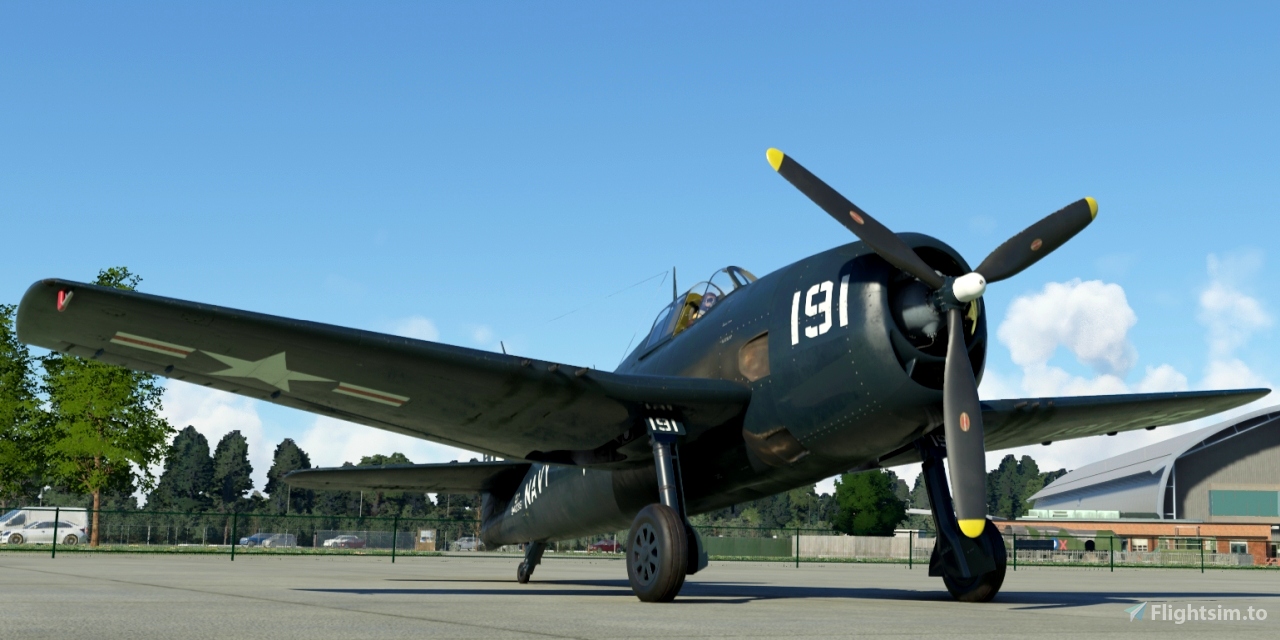 ✓ Grumman F6F-5 Hellcat US Navy CQTU-4 is a Microsoft Flight Simulator 2020 mod created by garfield. Download for free to enhance your experience in MSFS 2020. 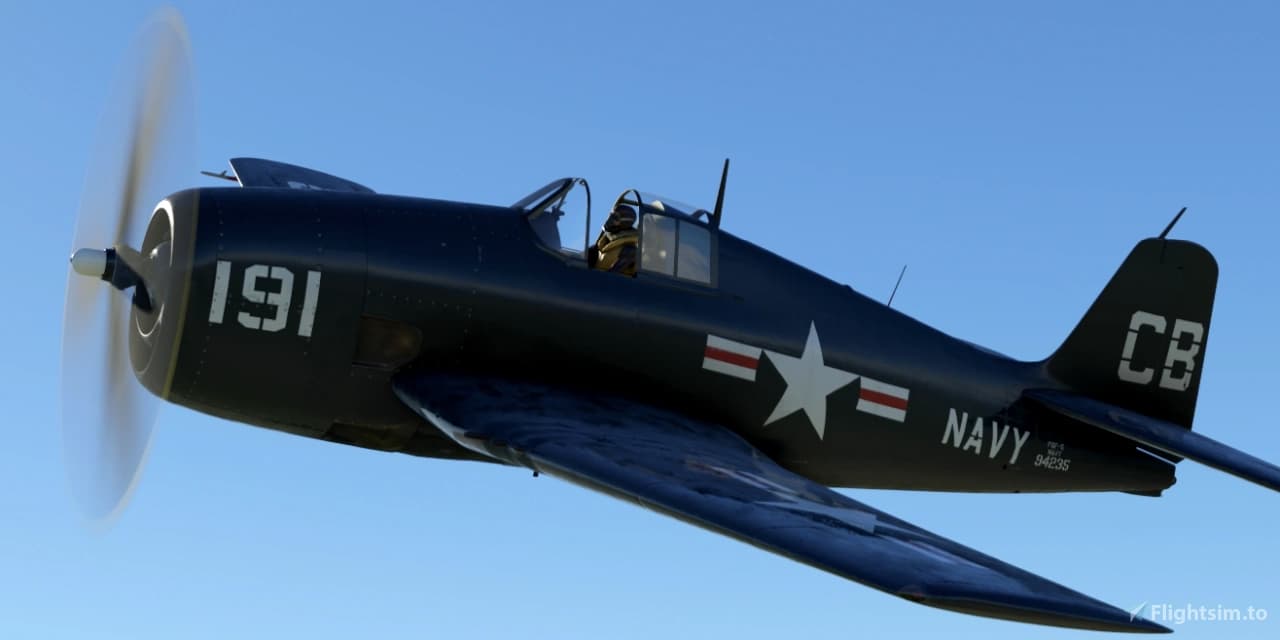 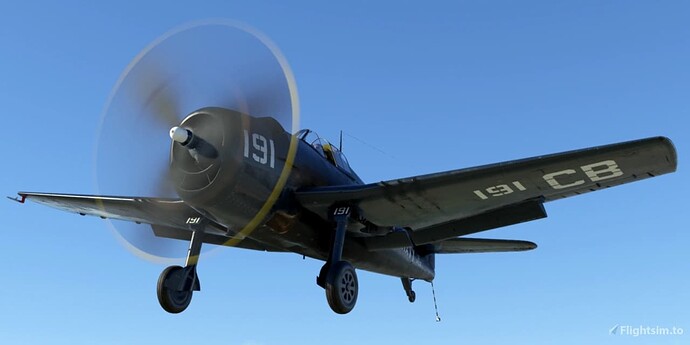 i heard that. right wing hevyer or has less square or both and vertical stabilizer has right way angle. some aircraft was right ailerons preset i really don’t sure and don’t know. but exactly about that left ruder trim i think is only about for push aircraft down by vertical p-factor… and must be is possible hellcat was one of that, what you mention conception about asymmetrical construction for compensate all stuff at cruise power

I would like to thank you, FlyingIron, for a wonderful initial release of the F6F-5 Hellcat. It is everything I was expecting and hoping for - specifically the superb initial audio mix. Since the release, I have been enjoying the audio reproduction of the Double Wasp within the Hellcat airframe. It sounds really close to how it does when you are standing near it - as I recall.

I am disappointed that over the past week or so, I’ve watched several respected Twitch streamers express in disgust that it’s too loud. In my opinion, the addon is one of the few addons that model the volume level appropriately. I question many people’s reference and perspective regarding the audio levels. Relative to the Rolls Royce Merlin in either the Spitfire or Mustang, an American warbird’s radial engine is indeed quite loud in comparison. Also, the relative audio levels between default aircraft addons and 3rd party addons appears to be inconsistent. I would prefer individualized audio adjustments per addon options rather than a total audio “nerf” that is the only current option in MSFS. I don’t want to be stripped of the superb and accurate audio of your product because the majority of the customer base has never experienced how loud it sounds like in real life.

I fear that as a result of (maybe 90%) of the customer base that I see on Twitch has never stood next to a Hellcat or watched one take off, you might “nerf” the R-2800 audio similar to what Milviz did with their Corsair. However, I realize that this is a game, and not a historical preservation of aviation experiences. I thank you for the brief moment that I am able to enjoy the work you did with the audio, but I also accept that many of your customers don’t want “realistic” audio and to experience (through the MSFS simulation) what it’s like to stand next to an American radial warbird - perhaps the perspective and expectations of the previously released Merlin in the Spitfire has established a biased reference for audio levels relative to other addons.

For what it’s worth, my vote is for FlyingIron to remain true to its endeavor for accurate historical preservation of these aircraft through the MSFS simulation - despite the apparent and disappointing common desire for in game sound leveling.

all flyingiron aircraft has crazy thing with sound in my system in any way. i can hear environment if flight too close to the ground. sea noise, birds… only way to avoid that is use headphones effect. but with default is too quite. i use gsx 1200 7.1 default settings for everything. i ask that before. but whatever you flight low enough on the wind coastline or place with birds sound modeling you can hear that clear and clean… about too load sound. well we haven’t opportunity to have load and true enough sound of shoot and aircraft engine. whatever sound system we will use. some frequency just can not be reproduced. or may be we have to create in our imagination 5kw speakers from 0.1 to 30khz with flat clear line at 150db… in any way i never heard some sound system was created, that can reproduce gunshot or 400-3000 hp prop engine or any jet engine… i seen in internet sennheizer sound system for 50k$. but sure it’s can not do that too. if i’m wrong, be free to correct me

Agreed. I love the sound implementation on the Hellcat. Makes me want to keep the canopy rolled back as long as possible.

I am disappointed that over the past week or so, I’ve watched several respected Twitch streamers express in disgust that it’s too loud. In my opinion, the addon is one of the few addons that model the volume level appropriately. I question many people’s reference and perspective regarding the audio levels.

I suspect many simmers and perhaps developers sometimes forget that there is a specific setting for headset simulation in the audio options. This itself implies that the default soundscape is supposed to be how you would hear it with naked ear without any muffling from a headset, if you want that you go turn on that setting. This is one of the few planes where I felt compelled to go turn the headset muffling on, that’s probably not a bad thing.

I think this is the real solution - use of the ‘headset’ in the audio settings is meant for these types of planes.
It would be better if it could be bound to a keyboard key and toggled- rather than a setting in the GUI - but I would so much rather have true engine volume and use that setting - than have ‘nerfed’ or ‘acceptable’ sound levels set to appease those who have no idea how loud a warbird is from the flight line or cockpit

My second repaint:
The scheme is of Fleet Air Arm (FAA) 800 Naval Air Squadron (NAS) serial JV111 with code E-P. Stationed at HMS EMPEROR during operation Dragoon. Dutch pilot Charlie Poublon ditched his aircraft for the Spanisch coast in 1944 due to flak damage. 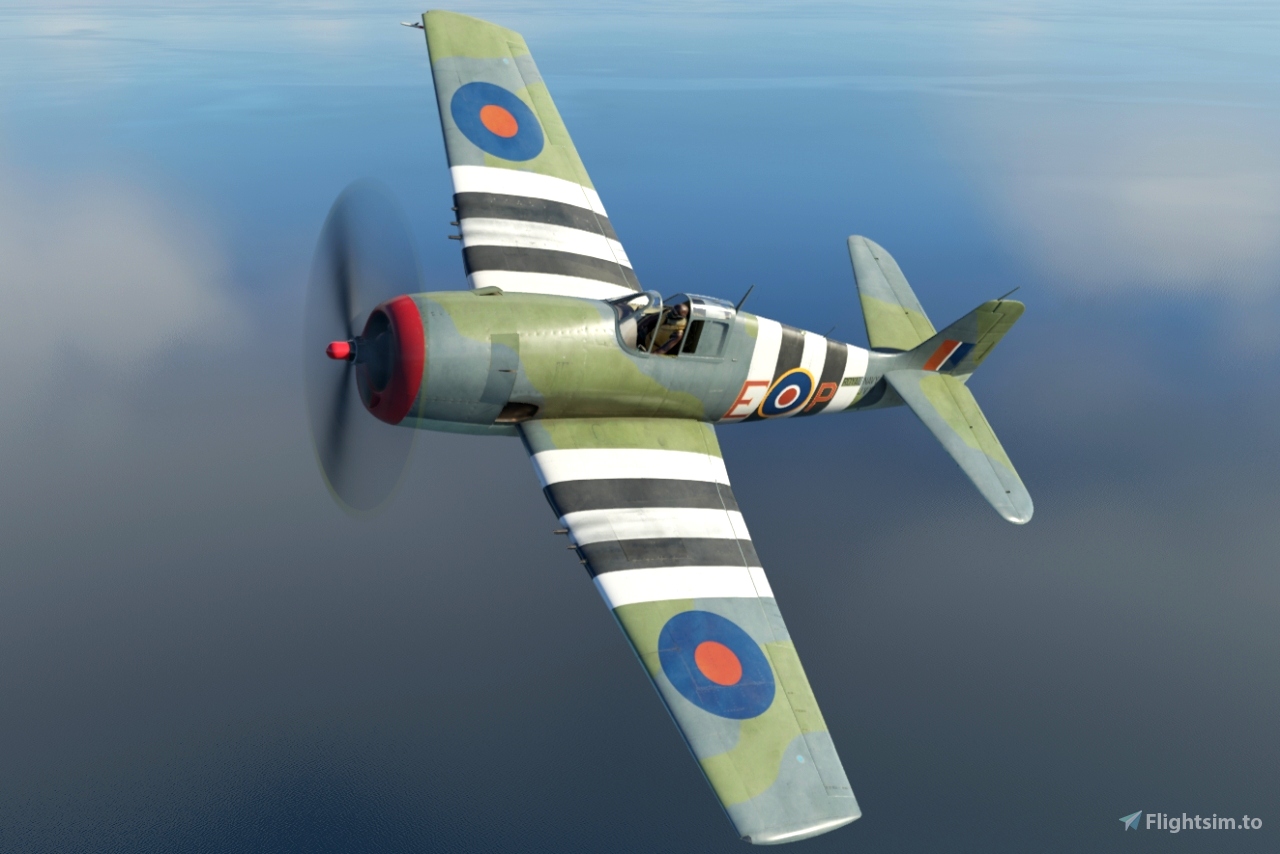 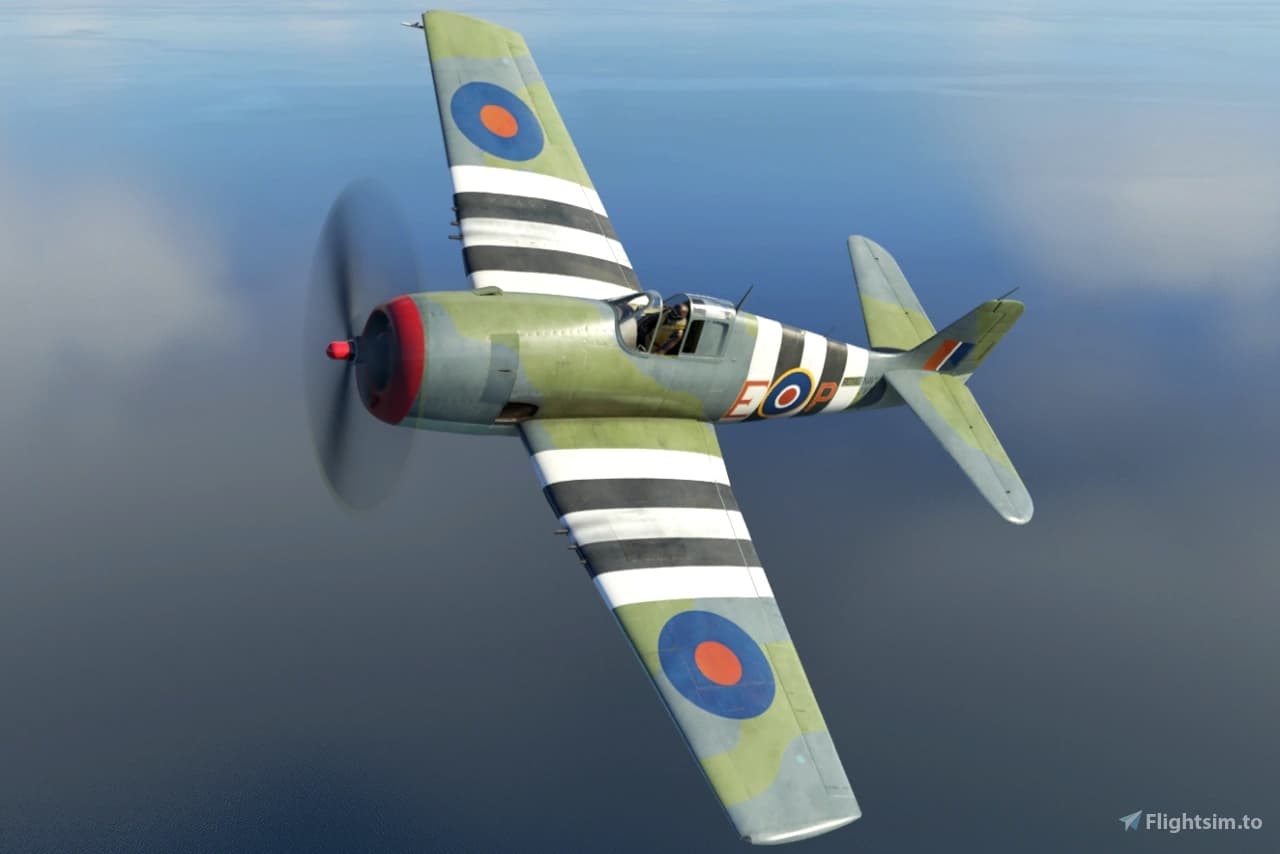 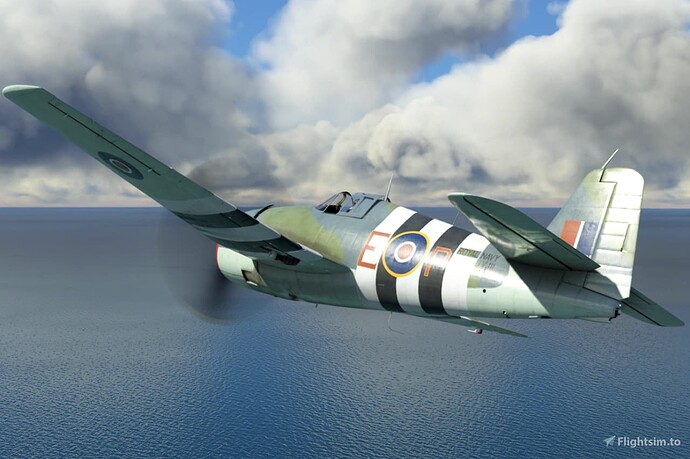 I’ve observed the opposite in a lot of cases. P-51 instruction was to do three point landings but you rarely see modern pilots do it. Same with Spitfire.

On the other hand three point (or damnear three point) landings and takeoffs have always been common with the Grumman fighters, to avoid prop contacting the ground but also because they are so easy to do compared to other aircraft.

light bug:) clocks arrows works as usual clocks do. but clocks values set to 24 instead 12. so we have a little mess with it

Another repaint of mine: 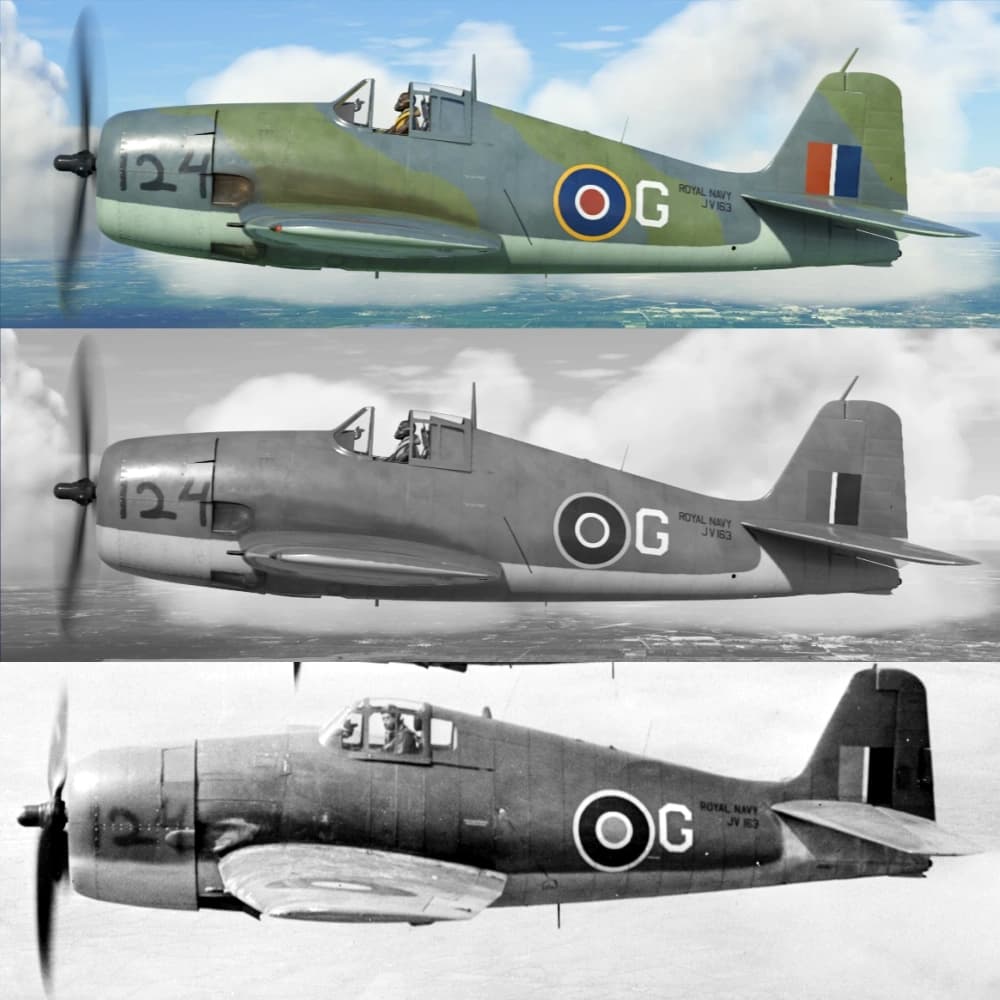 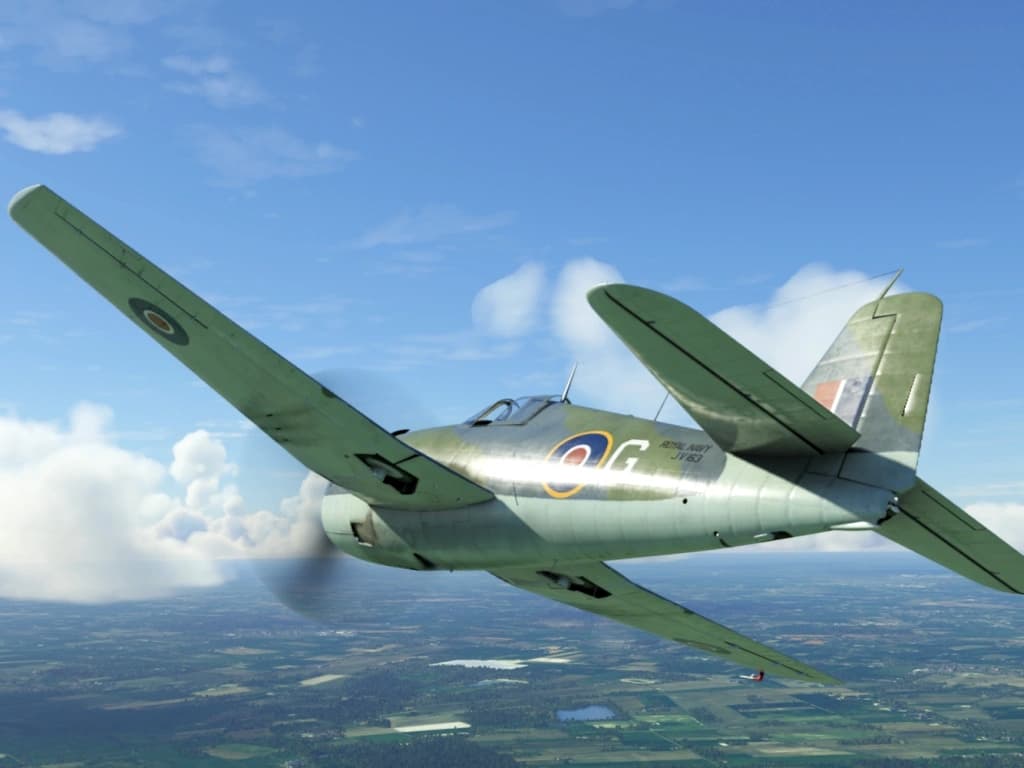 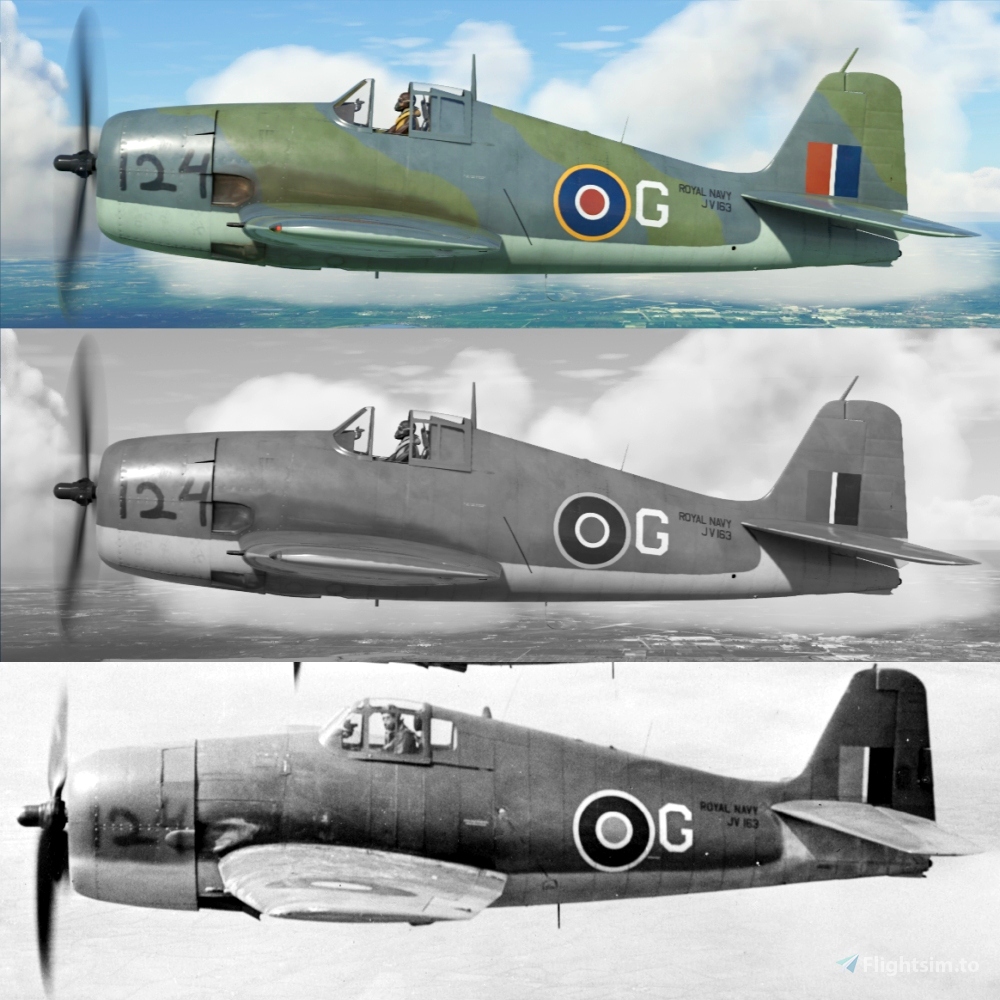 three more paints from me: 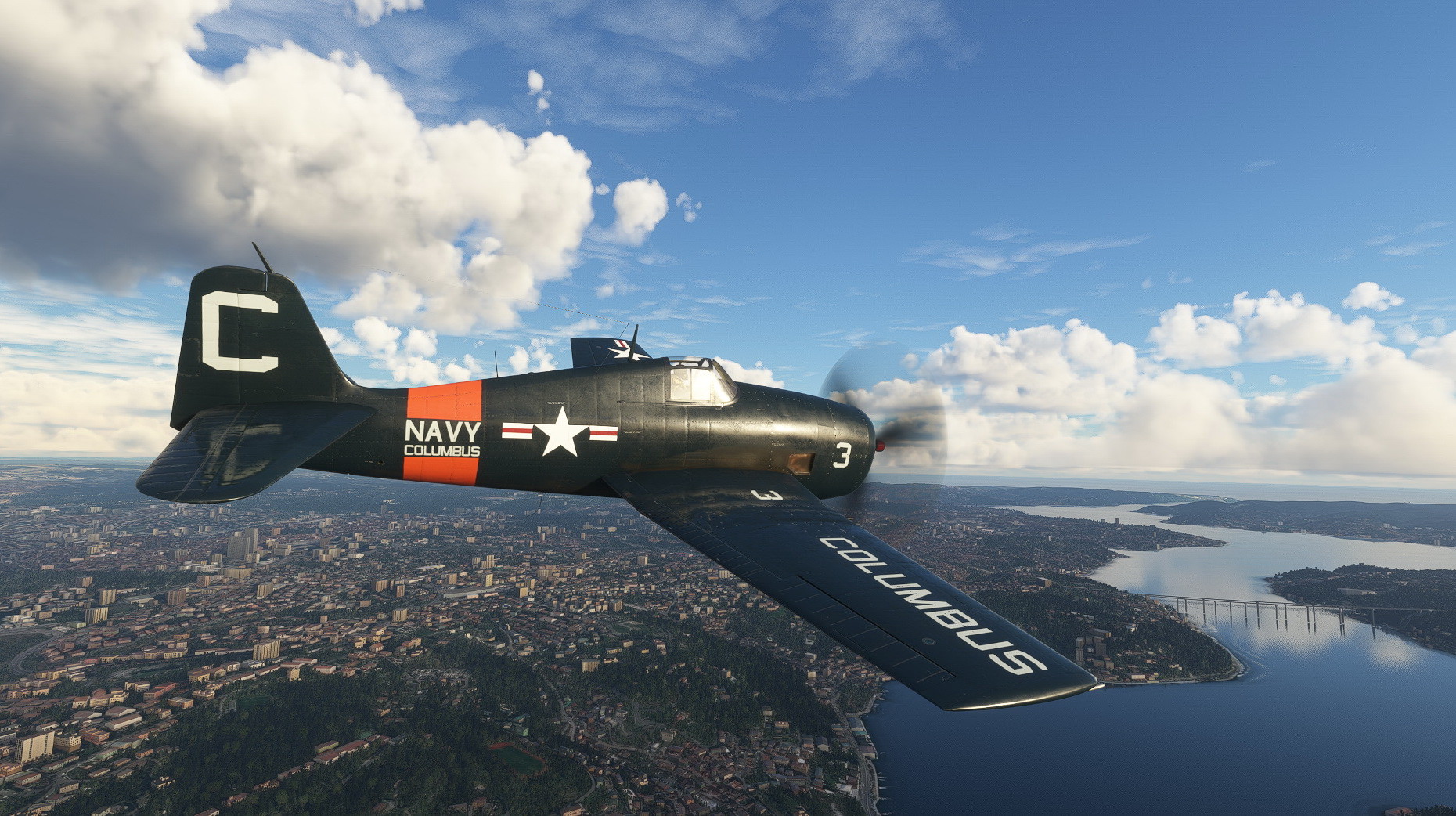 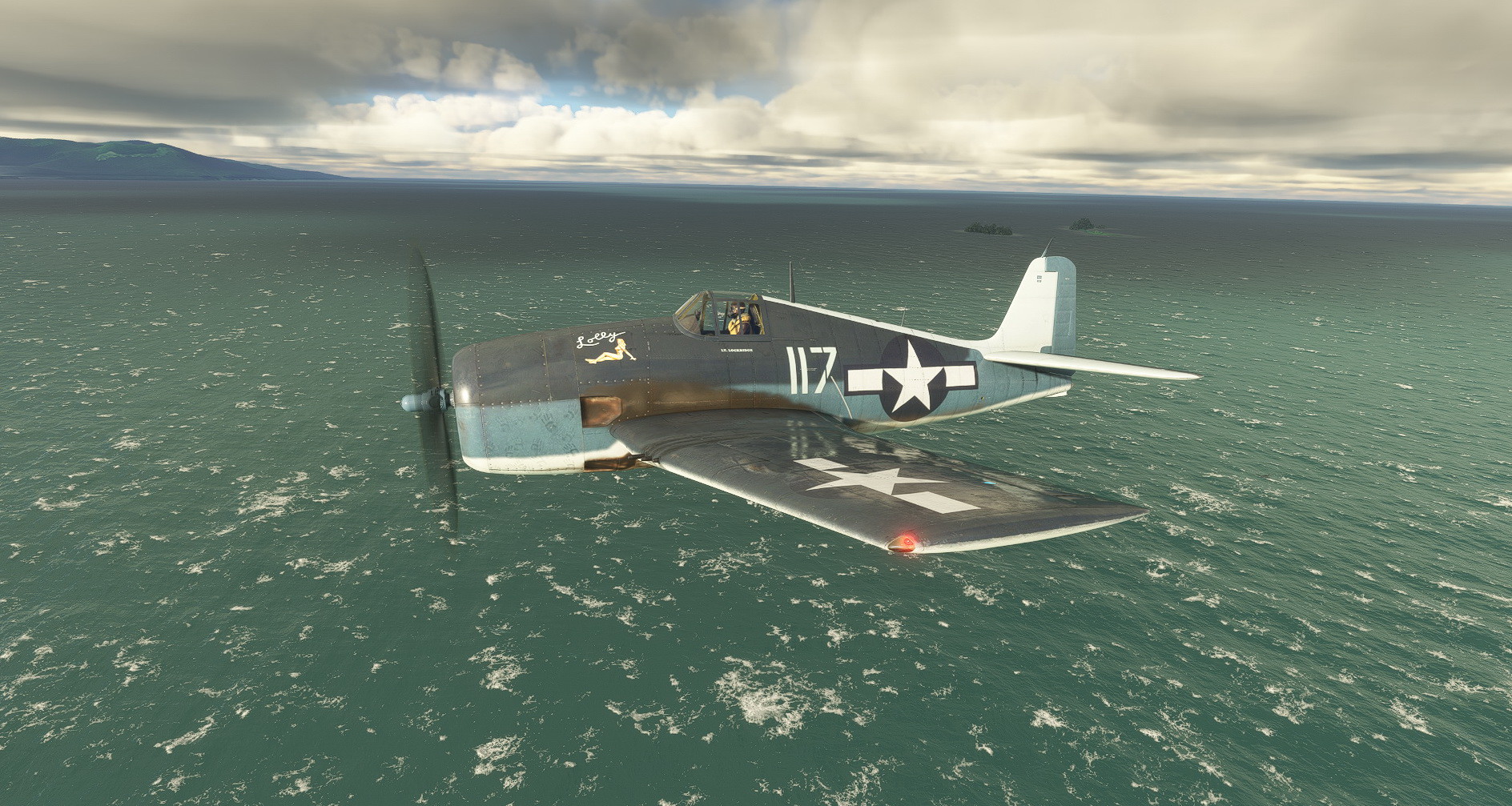 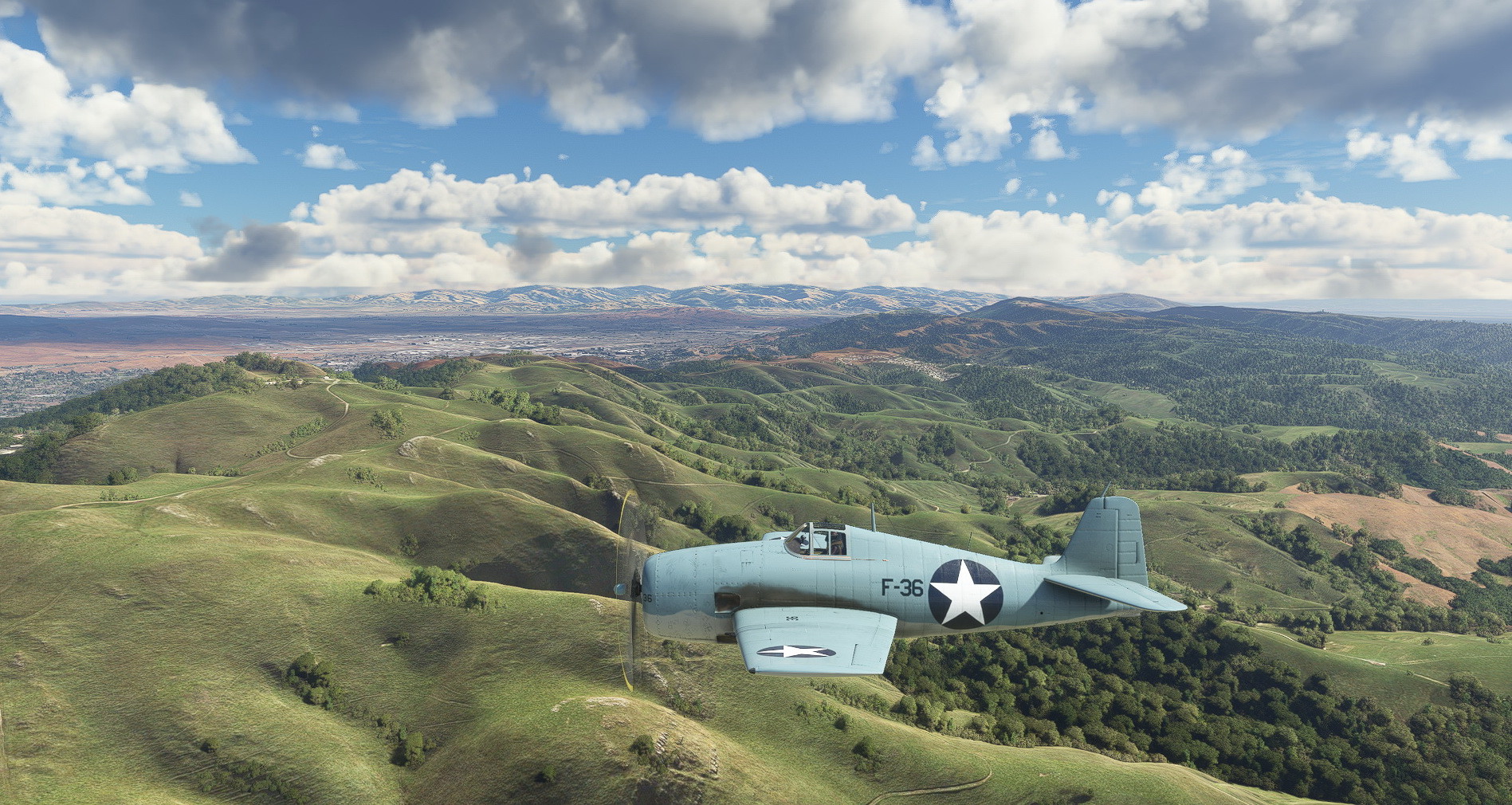