I would strongly recommend getting pedals before buying the panels. Then in order of priority Multi Panel, Switch Panel then Radio Panel

With that said, I changed my mind and purchased somthing else.

That priority will be useful for later.

I could not justify those in the end. I have since decided (for now) to settle on the yoke, throttle and pedals and in the end splashed out on a 49inch /32:9 144hz super wide monitor.

Yea, I just went with one 15.5” second monitor too. Way more versatile at the price of ONE little FIP.

Davekyn - Congrats! May you have many awesome flights!

I’ve had my Saitek Yoke system since FSX, shortly added to with an extra quadrant.
I’m very pleased with the yoke. I rarely used some of the switches on the quadrant, as I was used to the keyboard for flaps, gear, brakes were on the rudder pedals. The switches were somewhat in convenient.
I use the switches more now, for those times that msfs doesn’t detect my flaps from the Saitek multipanel, which is weird because i hear the sound, but flap doesn’t move.
I’m sure I might appreciate the other yokes more, this one works.
Prior to the yoke, I had always used a joystick, there’s some advantages to both, big difference is the footprint.
Nice feature with the Saitek, the panels can mount directly on top, but I’ve put a couple on the brackets of the quadrants.

After buying MSFS I upgraded from a Logitech Extreme 3D Pro to a Thrustmaster Airbus Edition. The difference was quite amazing, as aircraft that were difficult to fly using the Logitech became much easier with the Thurstmaster. I had used the Logitech for years with FSX, Prepar3d and Aerofly then finally in MSFS. In MSFS I had to adjust all the sensitivies on the Logitech, while the new Airbus edition required no adjustments. I put the improvement down to the different type of sensors Thrustmaster uses that are claimed not to wear. Only time will tell if that is true but they sure make a difference to the operation of the joystick. If looking for a yoke I would look for one that uses the same sort of sensors.

I own the Saitek Yoke but I use the Xbox Controller for now. The Yoke is too sticky which makes flying difficult. I did have to change the Xbox rubber control to the right stick. I do still use the Saitek throttle.

Sounds like you might benefit from the links posted way up the top of this thread. There is a heap of videos that show various mods and fixes.

I just found this one that might help. It basically deals with how to open and look inside to get an idea of the workings. Then towards the end it shows a rubber band mod that looks very cool. Whilst I am having no issues at the moment, I can tell like many others that the stick is going to need attention sooner of later. I like the idea of freeing it up a little and will myself be looking into more mods. I’d say the video I linked would be a good to to open it up and at least check out the lube.

WD40 has a white lithium Grease can that works well for this sort of thing unless someone else would like to correct me. Sounds like you have nothing to lose. Here is that link: 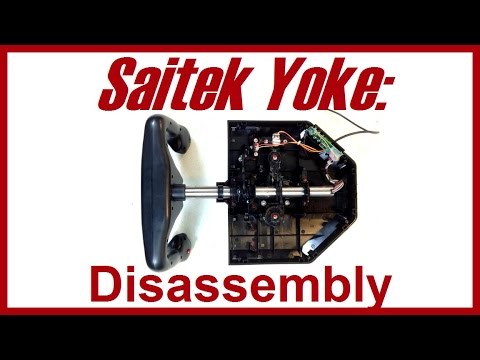 Hi,
i have the Cessna Saitek Yoke version, and when i launch Flight simulator, they are no Yoke displayed…
I already have installed the drivers from saitek website. On saitek setting panel on Windows desk, my Cessna Yoke is active.

Does anybody have his Cessna Yoke working well ?

One thing strange, for the Classical Yoke of saitek, there are 2 files on windows driver panel but with the Cessna Yoke just one

Totally agree, as i’ve had exactly the same situation, on the same periods, with the same brands. Except my “logitech” was originally a Saitek x52. But the problems were exactly the same as your extreme 3D pro

ok i saw cessna yoke on flight simulator but there is no controls atributed. Can i found somewhere profil ?

Problem 3 The M.S.F.S on screen like weather AI etc disappear

I do not wish to modify a new unit under warranty. I shouldn’t have to
All PC power options are set for best performance
Pass on why the AI and other things vanish
Note I don’t get these problems with the xbox control

Thanks for sharing - just removed the pitch springs and replaced with rubber bands, so much smoother. Took me about 30 minutes.

I just replaced the pitch with rubber bands, thanks for sharing.

I am a happy Logitech Yoke user. Very happy It works perfect with my present setup. Give it a try. You will be pleased.

It has been over a month and I can’t even install the drivers for the Logitech Flight Yoke System . Installation file for the Win 64bit in the Logitech website is corrupted. I was sent another link and the installation died in the middle. It did install something but it never completes. The last link they sent me points to the same corrupted installation file. Anybody out-here has a driver installation program that works?

Hi Davekyn, I am a veteran simmer from waaaayyyy back, and I have been using a Saitek Yoke and double Throttle quad setup for about 11 or 12 years. I initially upgraded from CH to this system. I fly about 20 or 25 hours each week, both solo and multiplayer. I can tell you that for the price, I have never been happier. I just modded my yoke only about 6 months ago and it is still working like new. Now, mind you, I am very protective of my equipment (I have also built a gps module and an autopilot module, which I use through mobiflight) and keep everything in good order, lubing and adjusting regularly, and fly gently (I uas trim religiously) not yanking or stressing the controls - so if you take good care of your equipment, it will last a very long time. I have often looked at the new Honeycomb system, but I just cannot justify the cost. Just a bit of chatter from an old simmer, who has had very good experiences with Saitek.