As per the title, I’m curious about Neil Birch’s many volumes of UK farmstrips. Has anybody used them? He covers the kind of obscure places that nobody else is likely to and his work looks good quality from the pictures I’ve seen but I’m not sure if they are a bit to ‘fantasy’ oriented, I saw a bear at one of them, and what I really like is a sober recreation of the real thing, at least as much as possible.

Superpud’s freeware at Salcombe is one of my favourite places to fly, and I want to to be able to enjoy even smaller strips like Hallwell and Branscombe, which Birch seems to include, but stretched across several volumes.

Does anyone have any feedback?

I do, they are fun and have lots of atmosphere but are very hard to find after you takeoff.

I’m not sure if his MO has changed, but at one point all of the ones he uploaded to flightsim.to required a library that he didn’t provide a link to nor would he ever respond to any request for it.

Maybe that spices it up.

I think it’s a kind of payware/freeware hybrid but I’m not totally sure. Perhaps if you get the payware library you see more. There’s certainly an unmatched choice.

I’m finishing up Dunkeswell but after that I’ll do some more small SW airfields.

It’ll depend on how many have terrain that breaks in development mode, which I can no longer be bothered to deal with. That’s quite a few so far.

I think the hard to find aspect is what makes them appealing. I like the idea of using VOR and dead reckoning and trying to locate and land at them without GPS assistance. Proper bush trip flying.

My only concern is how accurate they are. I can see they come with PDF guides to the airstrips which I love, but I saw some comments on a forum that he makes them kind of fantasy based whereas I want them to look authentic. At least, I ‘think’ I do, I mean maybe I won’t care as I won’t know the difference, but one of the appeals to me of Superspud’s Bolt Head airfield at Salcombe is how closely it mirrors the real thing. I found a Youtube channel of a guy called Gull Perch Flyer who records really great videos from there, and even though I’ve never been there, it feels like I know the area intimately.

I don’t want to buy airstrips and then see them on Youtube and they look nothing like the real thing if that makes sense. Part of my enjoyment comes from exploring, and if they aren’t accurate that makes the exploration pointless as its not authentic. Does that make sense?

I can’t wait for Dunkeswell, I purposely haven’t flown there at all yet. I only use airports that I’ve either bought third party payware or have been modelled to a good standard on flightsim.to.

As a Devonian I would have had a much poorer MSFS experience were it not for your coverage of the the southwest so I really appreciate you continuing to work there.

I feel very lucky as now I’m starting to buy excllent payware from the likes of Burning Blue Design and Pilot Plus, and they seem to only cover the UK south of London pretty much so I’m glad I live where I do!

Dunkeswell as is isn’t too horrific compared to many other standard airports, but obviously there’s no human touch.

The Neil’s farm stuff is so well established there must be plenty of videos and reviews to get a decent idea of what it’s like. His work is a full blown flight sim fixture.

I did manage to track down the library file for Neil’s airstrips, but rather than one folder for all objects, each object had its own folder which put me off using it.

I think he’s said himself that the airstrips are loosely based on the real thing, so if you want accuracy then they’re probably not for you.

All I’ve found is this trailer; 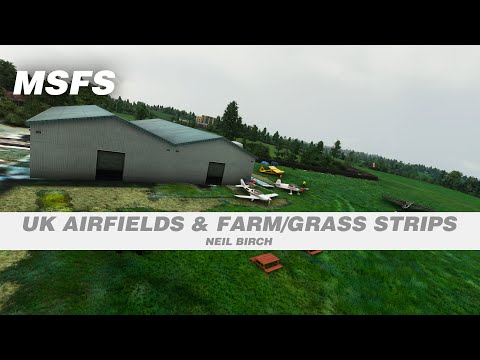 The quality looks good, but it’s fact he’s added a bear and some firetrucks to farm strips that makes me wonder if it will put me off for lack of realism.

Do you mean that rather than a single add on in the community folder, I’ll have hundreds?

Well it wasn’t up to hundreds when I had it, but there was probably still over 50 folders and as I have a lt of mods already I didn’t really want all of the clutter in my community folder. In the 6-12 months since I used it he may have consolidated it…or there might now really be hundreds of folders.

Hmm, yeah I have about 80 folders in there already!

I had them - I was big fan of Gerry Winskill’s UK Farmstrips series in FSX so I bought these - 3 packs - to have a look at.

But I found that whilst yes, they do add things to the strips, they have a hit on performance. In fact so much it made my normally smooth VR flying a comp[lete stutterfest whenever I got within 10 miles of any of the sceneries in the pack.

So I moved them all to a temp folder and tbh they have stayed there ever since. I found that the default strips (and there are tons of them - see screenshot from East Anglia alone and my first strip tour, below) are just as difficult to find, with enough present to recognise it is a strip (where you can actually do so in RL) and the nav is actually more difficult and therefore more fun, due to the extra stuff that this pack puts in, being absent - if you get my drift.

So whilst they look good, they are not opitmised.

I did some research and found that this was the case with packs he had done for previous sims and that he was aware of the performance hits, he did nothing to adjust them - so I decided not to buy any more of his scenery. Shame for him, 'cos I was set to buy everything.

Default strips in E Anglia with my fligh plan overlaid: 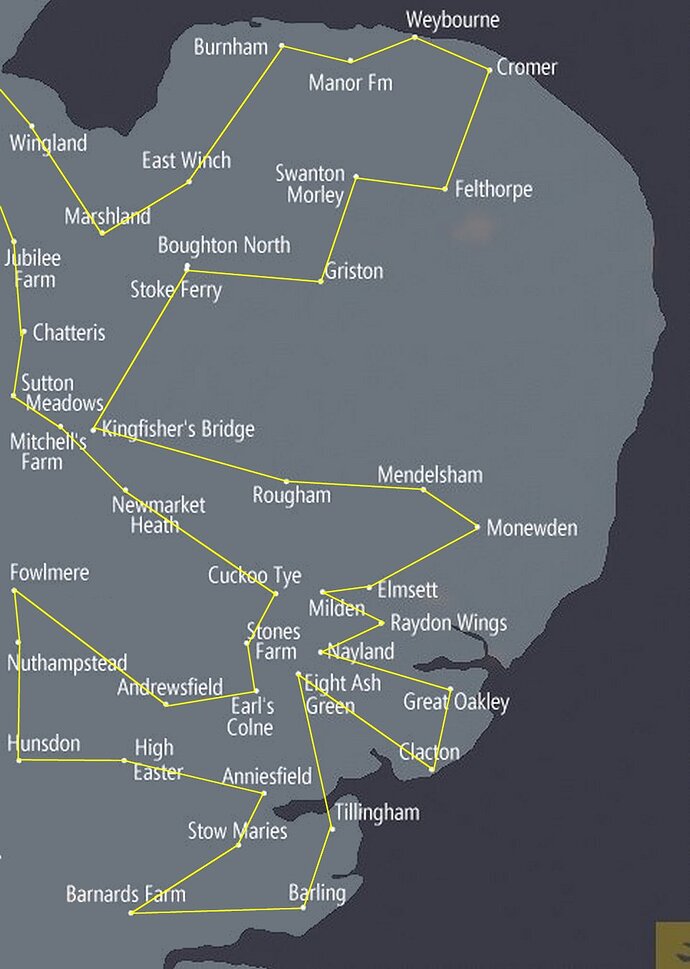 These aren’t all the strips, either - just those that have only grass runways. Some are metalled, even if very short, and I don’t use those.

That’s too bad, I like the idea of trying them. I do love that there are so many different airports, airfields, strips etc in the sim. Everyone can have a completely different experience. I fly the Cessna 152 and love airfields like Popham and Bodmin, and GA focused small airports like St Just, Shoreham and Lydd. Others like airliners and the massive airports, whilst a few fly military planes and will land at military airports. Then helicopters, micro and ultralites etc. All totally different experiences.

I was trying to find, I think it was Wingland - not 100% sure. First I thought this was it and landed - but no… 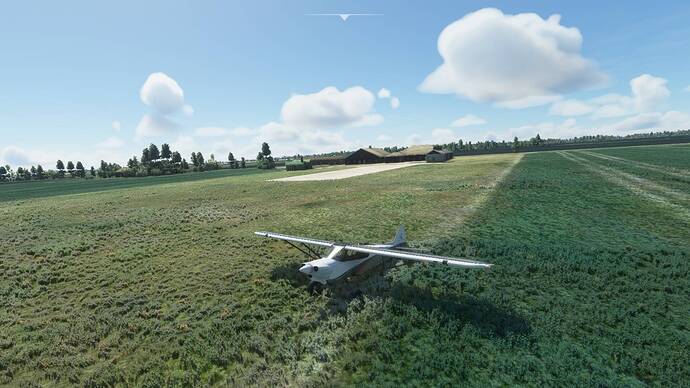 so I flew further in the direction I thought it would be - again, wrong field! Here I am, taxiing down a road to see if there were any hangars or barns about… 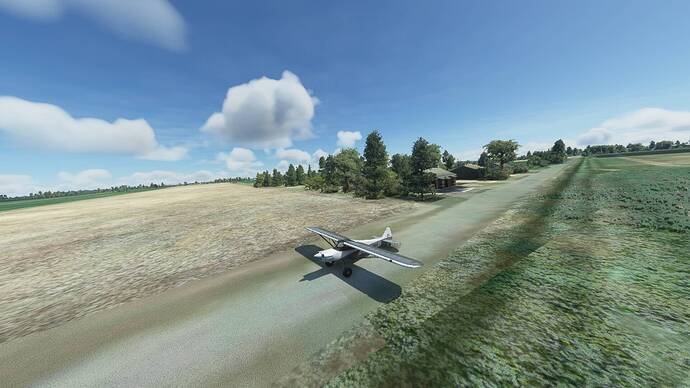 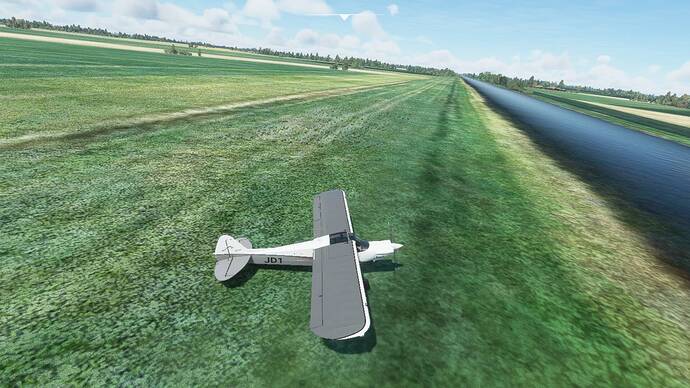 but no - after taxiing to the other end I came across the hangar and “apron”: 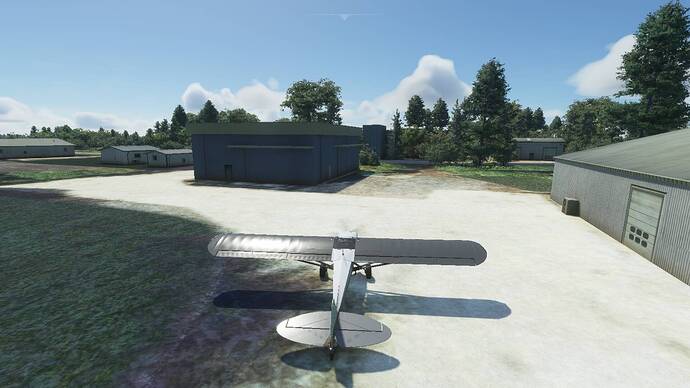 This was with default scenery and I have to say, it’s good enough for me, and no extra performance hit - so that’s why I won’t get any more of Neil Birch’s stuff unless and until I can use it in VR (must say that complaints I found for those sceneries in older sims were for 2D non-VR performance - you can find the customer reviews on Steam).

edit - I think you can “try before you buy” - I’m pretty sure he uploaded a few for free download somewhere, might be that flightsim.to site - and you can see for yourself and then decide whether to buy or not.

I was hoping it would be good for some local airfields and strips close to me in Devon and Cornwall. Branscombe, Hallwell, St Mellion, Brent Tor, Eggsford being a few. Fingers crossed Superspud is at a loose end and can knock out a couple of them, he seems to enjoy the southwest, the West Country is the best country after all.

Have you looked here?

Just looked again - this is where I got the free downloads from. Such as:

FS2020 – Scenery RAF Cark Ulverston. This is my first attempt at converting my files from FSX to 2020, I hope you like it. On site we have the old control tower (which is now a house). The la…

FS2020 – EGWY Breidden Strip Grass Strip, Powys for 2020 Up into Wales with my next offeri.ng. Not too difficult to find being situated right next door to the A43 and just up the road from th…

Good luck, anyway - you never know, you may find them okay, performance-wise.

Just downloaded one of these. No idea why it took me so long.

I think I’ve discovered the reason for the size and performance issues.

Every single custom item from a fence to a building is in its own package. So to run one of these wee airfields you appear to be running 30-50 different packages all at once rather than any other which has every model in the same package.

Ah - thanks. I wondered if he had gone overboard like that. What I find really strange and disappointing is that this has been the case since his FSX stuff and he seems intent to just keep doing them the same way.

I would have bought the whole series if it was better optimised.

I’ve removed all the packs I did buy and have them in a ‘storage’ folder next to the Community folder - I’ll try them again when I want to fly around them. Don’t see the point in possibly slowing down the sim for things I’m not currently using.

I didn’t even think it was possible to do it that way. Maybe it’s an old school technique.

Ah well. If doing it like that makes him happy then I’m all for it.

Sorry for the delay in this post - I just happened to come across a screenshot of another thing that put me off these scenery packs.

I flew to Ashley’s Field, which is an included strip from one of the first 3 packs - and found what you see in the screenshot. Just how this can get by any test or even just a look at the strip is beyond me - I really don’t see how it couldn’t have been noticed.

Acceptable for freeware, perhaps, but definitely not for payware: 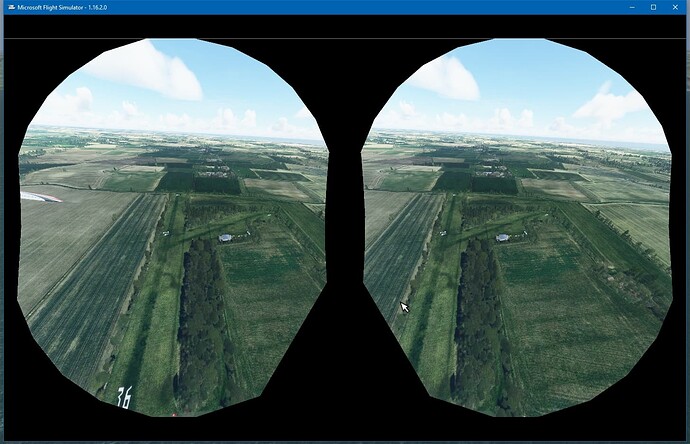 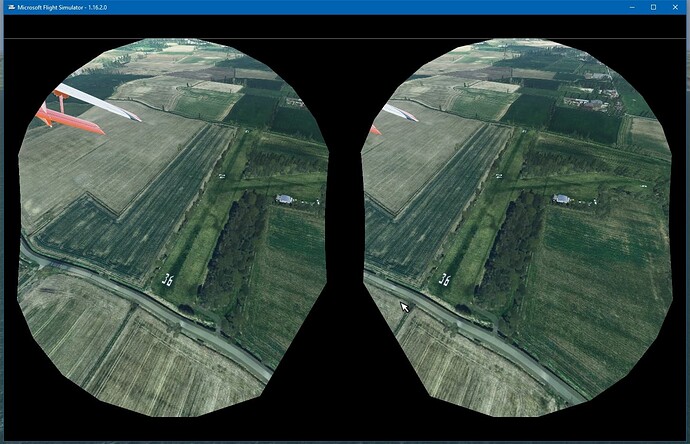