The 4080 is getting bad reviews due to its price and apparently isn’t selling well, but for me it seems like a great card to consider for MSFS. While it only seems to offer a ~30% boost over the previous gen cards like the 3090 with regular non-DLSS settings, with DLSS 3.0 and Frame Generation in MSFS I feel like it should be a pretty awesome card for MSFS and I’m curious to see if anyone upgraded to it from a 3080 Ti (which I have now) or similar. I’m hoping a 4080 can deliver about 2x the framerate in CPU-limited airport and heavy scenery scenarios, is that possible? Not nearly as much as the 4090 but it uses considerably less power, runs quieter and costs hundreds of dollars less. If it gives a minimum framerate of 70+ fps in the busiest areas (with a 5800X3D) that’s all I really need. Of course I’d like to wait and see what the AMD 7900 XT and XTX are like, and wait for price drops, but I’d like to know from someone first hand how the performance is first.

Moved to #self-service:pc-hardware which is more appropriate

Yes it is very quiet here on the 4080 upgrade front. I, like you and many others I expect, think the 4080 would be a potentially worthy upgrade but not at the price at which it currently sells.

In any case, I found this youtube clip while doing my own research that should be quite relevant to you as it benchmarks MSFS at 4K with DLSS on and off on a 5800X3D like yours with a 3080 (not Ti though) compared to a 4080.

With DLSS Quality FG @ 4K Ultra, MSFS is averaging 130 FPS over a complex city, so I think you’ll be happy.

Thanks for the find. Wow that’s amazing. I hope no one else wants to buy these cards so us simmers can grab them for cheap.

I was on the verge of getting one at my local at my local microcenter but the price is just too close to a 4090 @msrp.
If it can stay @1200 I’ll consider getting one in another build. Have too many PCs around the house

What I test now is pixel per display in oculus debug tool and use it with DLSS because you can supersample when DLSS enabled. Does someone know how to calculate target rendering ? below 2 screenshots : 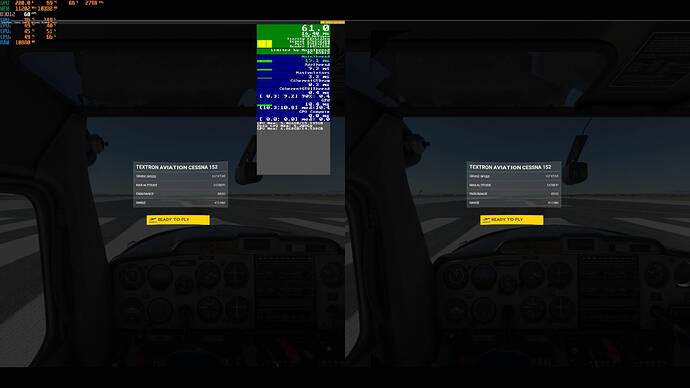 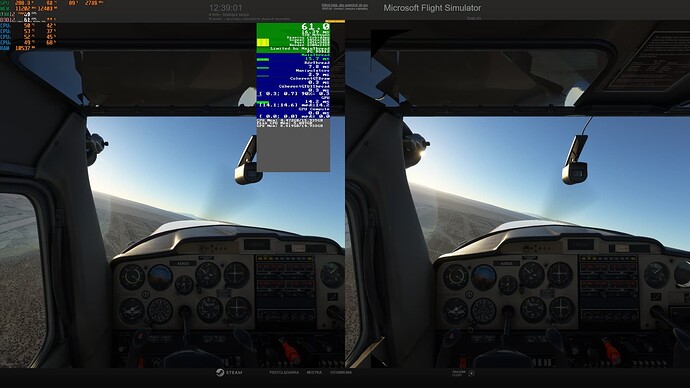 First pricelisting of the 4080 over here was over 1600 euro’s, that’s just too much for “just a graphicscard”.
I know it’s miles better than the 1080 i’m running, but this whole covid/miners/chip run on graphicscards the last years has upped the price soooooo much that i’m just not interested in paying more than the original price the 3080 was offered for (829-ish euro’s when it was anounced, it never saw that low price over here)… i was willing to pay that much just this once, but then all shizzle hit the fanizzle… and from what i’ve heard/learnt, it’s nvidia that’s setting the base price higher after they saw what scalpers were asking AND RECEIVING for overpriced merchandise, whereas the normal vendors will never be able to go under that price anyways because they have to bolt stuff onto the default card… i’ve never spent more on a graphics card than roughly 500 euro’s… i was willing to go to that 800… but 1600?! are you kidding me? It’s just a part in my computer that shows pretty stuff on my screen, it’s not layd down in gold, nor can i grab and hold it like a periferal without it breaking… it’s just not worth me working that many hours to cough up that kind of dough because of “world circumstances” This just feels like a team green moneygrab, so lets see what Team Red can do the coming months.

But thanks for the review, sheylynn2547, much appreciated.

I personally would not go from a thirty series to a forty, of to have that kind of cash look into 7800X3D of what ever they name it next quarter.

GPU upgrades don’t do much when you’re already 3080ti 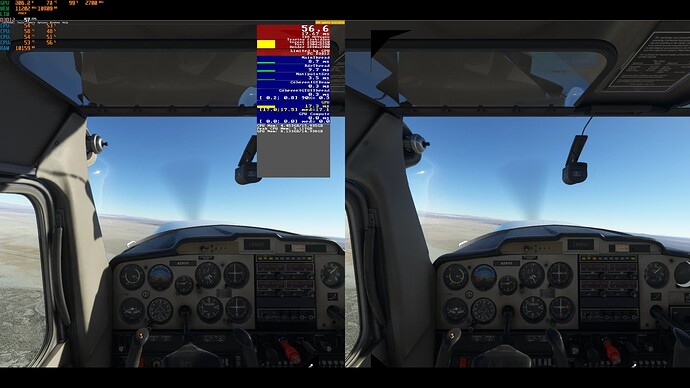 , so changing CPU will not change anything…

today I will do some testing in chicago on meigs airfield…

so changing CPU will not change anything…

Your terrain LOD must be near 100 not to be hammering that 7600k. Changing the CPU will not help with your current settings, but will allow you to increase terrain LOD. Anyone can be GPU limited if you crank down terrain LOD. 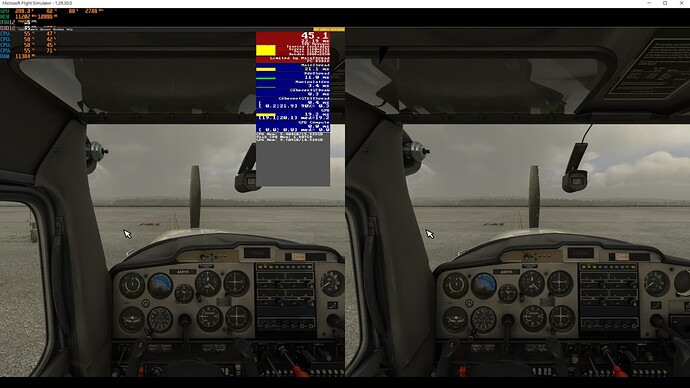 So on your 4080, when you’re in a CPU-limited scenario, like say taxiing at Heathrow, does turning on DLSS 3.0 Frame Generation actually double your frame rate?

I’ve got a 5600x with my rtx 4800 and I’ve been pretty disappointed by the VR performance. I see micro stutters about as often as with the 3800ti I had even though it looked like I was GPU limited before.

Maybe the 5600x is the bottleneck?

I have 5800x3d and 4080. No VR though. Tremendous performance in my opinion. I don’t even like FG / DLSS though. I can fully max it on TAA at 125 scale and cap it at 40 fps in most places for amazing performance and smoothness with DX11. In crazy places like NYC, Copenhagen, etc, I def need dx12 + FG to avoid stuttering (maxed out).