Approach flyback bug - Not fixed as stated in SU5

This problem still exists. It occurs often and should be fixed because it is really annoying. The developers of MSFS must know about this problem. Guys, instead of adding a kazillion new features, please fix the problems in the original sim first.

Future me: Check this post, copy paste and add SU6!

Unless WT perfects their G1000Nxi until SU6 and rolls out the underlying FP to other planes , there is a very good chance you will be back at SU6.

I absolutely hate this bug. Please Asobo listen to your gamers. This bug KILLS the experience. There’s nothing more disheartening than flying a 2-3 hour flight only for the game to screw you over in the last 50 miles. At the moment it always wants to take me back to the first waypoint in the flight which tends to be on the SID just after departure. Having to disconnect AP and then fly HDG mode or manually is just not a proper simulation.

I’m having the same issue, plus it wants to take me to the first waypoint after i insert a direct in the airbus fmc…

Anyone see this fixed in SU6 patch notes? I couldn’t…

It’s probably not going to get fixed permanently until you use a Working Title FMS with their revised ARINC compliant Flight Planner logic. Currently that would be the CJ4 and the NXi.

Long term - when WT rips out the legacy FP code and replaces it with what’s inside NXi/CJ4, then likely this bug will remain permanently resolved.

does that mean this will resolve the issue across all planes (even non-G1000)?

Third party makers have a choice, they can configure their planes to use one of the sim’s FMS as listed above, or if they implement their own using a different brand/maker, they can also take advantage of the improved FP engine. That will require some coding work on their part though.

Hi guys, is this fixed in SU6?

May I ask, where did you find that info?

Already found it by myself.

Should have read properly. 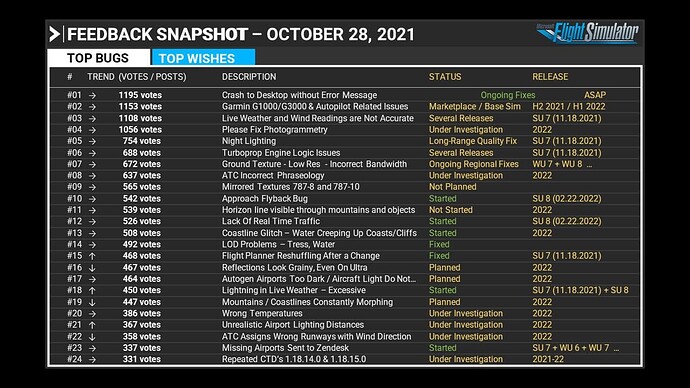 Did my first serious IFR flight for a while yesterday and discovered that this bug is STILL alive. How is this thing so difficult to quash? Will it ever die?

Also, are there any new workarounds I don’t know about?

Could you please describe in detail what exactly happened?

Sure. My IFR flight plan (set up before starting the flight) had “approach” set to automatic. As I got close to my destination airport, ATC gave me an RNAV approach via a waypoint. I went into the “procedures” page on the Garmin and set that approach. When I activated it, the TBM started turning back the way we’d come. What it should have done, was alter course a few degrees toward the new waypoint. I didn’t let it finish the turn, but it looked like it wanted to go back to the previous waypoint we’d passed some minutes before.

That’s exactly what the old flyback bug was, right?

That has been my experience as well. It was quite annoying when my 172 turned around and flew 100 miles back to the last waypoint I passed before I activated the approach. One thing that has helped is manually adding a waypoint about 20 miles out from the airport so at worst now it will only take me back 20 miles. I just wait to activate my approach until I’ve passed my added waypoint.

I cannot believe this flyback bug is still happening. Like others I am forced to add another waypoint closer to the arrival airport. That appears to work mostly.