Attempting to fly around the world

To make it harder when you need to find another airport, you should look for the next in alphabetical order

In FSX I flew around the world in a Cessna Citation X I believe it is the fastest commercial jet.

I’m attempting to do it in the 208 Caravan and within the limitations of FSEconomy. I started in Florida
flying no more than 5000 feet agl using live weather as long as I could see the scenery. I just jumped from Alaska to Russia following whatever route I could find within FSE.

I think doing something like this is a great way to keep up interest and avoid boredom.

Super cool, ya would be fun to have other join along the way, might be hard to try to time the entire thing together. Had a couple of friends join me yesterday in one of my first few legs in Russia.

Awesome, and good luck. I’m going to do something similar someday if I get the time. Keep in mind that fuel burn rates are not always that accurate, so plan for alternates when you can and measure flight times and distances against fuel use (kind of like the real world). Again, good luck and enjoy!

Just finished leg 41 of my trip around the world in a very circuitous site seeing tour. Currently 44,000Nm in and have made it to the Southern tip of New Zealand having started in Scotland. 167 flight hours done. I think I’m probably nearly half way there, but there is a lot of places to visit in Asia, Europe and Africa yet. I’ve already taken more than 2,300 screenshots which are now rotating every 5 mins on my desktop

INTRODUCTION Hi all. Having reached Leg 43 of my travels, I thought I should put a little intro here for those who may be coming to this thread new. First off, I am new to flight simming - I have tried xplane, but never really got into it. The visuals of MSFS attracted me, and here we are. As this is a sim, there isn’t progression or missions etc to provide clear focus on achieving goals, so I decided that it would make my flying more enjoyable if I did have a purpose or aim to it. So I decide…

I’m also already planning my next trip which is to visit every capital city in the world landing only in capital cities. I’ve been working hard on an excel visual basic (I know, but something to do in the cruse right?) Solution to find the shortest and most efficient route. I think I’ve got it down to just under 110,000Nm visiting 227 capitals. The plan is to use the longitude as it should have sufficient range to make the longest leg from Mexico City to French Polynesia which is about 4,000Nm. It will be close though!

Bought myself a new shiny G36 and took off from the Beechcraft factory. Currently stuck in Juneau, Alaska as the weather is rubbish.

Flying with real weather and just signed up for Vatsim to give that a go.

Anyone keen to do a few legs together at the weekend???

Good luck! I wouldn’t be able to do it in VR nor without auto pilot. I think I spend more time researching where I’m flying / flying to than operate the actual plane.

My solution to the real time problem was to err not sleep (much). When the moon is half to full you still have enough light to see with the drone camera. Moonless nights are very very dark though.

Good luck to you. Keep us posted on you progress. Maybe with some screenshots

Still waiting for someone to make a Lockheed Electra for a Amelia Earhart around the world tour. Just hope I’ll find Howard Island …

Flying east from Minnesota in an XCub. Trying to touch wheels to every country it’s conceivable to reach. I’ll be leaving the North Atlantic/Europe/Baltic/North Mediterranean portion in 3 or 4 more flights. The tally so far; 43 countries, 46 individual legs, almost 9,000 miles, almost 90 hours. It’s gonna stitch together into an awesome Bush Trip.

Note: The above mileage may be incorrect. I just saw a “shorter” route with longer miles. In sim so can’t suss it out right now.

I’ll definitely do that when I fly around the world …which should be starting around Apr of this year.

Let me know when and where are you meeting so I can see… Looking forward to join!

My (free) flight planner has many built-in flights, including one that lands in every country’s capital.

Hey all, i’ve been thinking about circumventing(?) The world aswell. And it would be nice to do some flying with more people. My plan was to fly without gps, in or outside of the sim, and only use VOR, and dme’s and such. Manly to force me to look out of the window more and to have something to do while flying the long stretches. As i don’t like time cheating;) so if anyone is interested maybe we could have a chat on discord about the subject sometimes? Share ideas and routes?

). I started in France and I am currently in Nepal.
As I am flying VFR, I think it is difficult to always fly in real time / real weather. I don’t really want to fly at night as I do that to see and bad weather could block me for many days (or sometime, as in Nepal, we need to gain a lot of altitude witch is very difficult for days or weeks if you don’t help the weather a bit). I do it whenever possible, but not always.

After a few trials I’ve started a recent go at this originating from Dutch Harbor Alaska using the Pitts biplane. I’m streaming this on youtube, Flying Anthony - YouTube

I’m not sure I will be able to stick the Pitts due to instrument weather along the polar route (live weather) but its a good aircraft for scud running. Navigation without radio nav aids is a bit ridiculous and fun.

Thursday afternoons is my dedicated time but I may randomly fly bits other times. 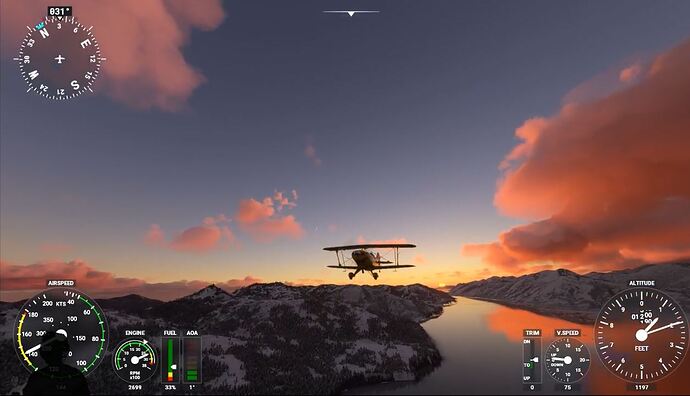 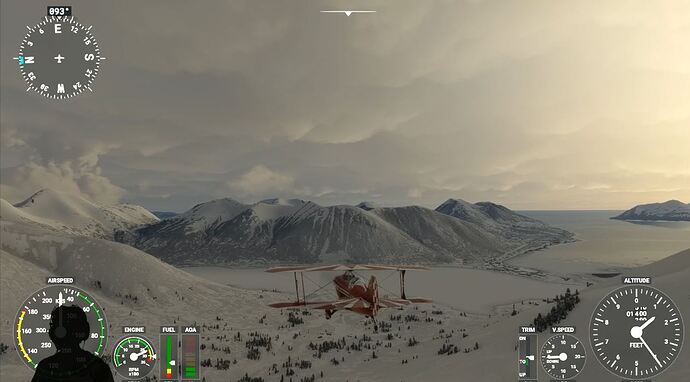 What kind of range does that Pitts have?
I am progressing through Russia on the way to Moscow, there are some pretty sparse airports on the Eastern side of Russia.

The MB339A seems to have about the minimum in range, as I have hit the low fuel alert on two legs, but made it. Weather was pretty rough with rain and some snow, and icing, so think that might be affecting my range.

The VFR map comes in handy with isoline chart selected for topographic indication of mountains in the scud running you need to do with bad weather, as the plane does not have synthetic vision.

I think it would of been best to go west to east, and get a tail wind, but I am too far along now, trying to stay lower levels to avoid headwinds, and severe icing, which canopy / windows do not have any defrost or anti ice capability that I can turn on. It seems to only have Pitot heat and engine ice.

Tip to extend range: Lean the fuel beyond what really should still work. The game doesn’t simulate engine damage and leaning is the most efficient fuel saver. Rather than reduce throttle, lean the mixture to slow down a bit.

Good winds help a lot. The best I had was a 45 knot tailwind in a nice storm over Siberia heading East reaching 229 GS in the Bonanza. (Normally max 185)

Slower is more efficient. I mapped it all out for the Bonanza

Mapping the performance of the Beechcraft Bonanza G36 Propellers/Twin-Props

1.12.13.0 updates below I’ve been flying the Bonanza for months in my world tour and after having trouble reaching the listed range earlier I decided to examine the performance of the aircraft in detail. In particular for reaching Hawaii later as part of my tour. The critical leg there is from Washington island (PLNW) to Kaalaika Airstrip (HI25) at 910 nm. First I started measuring fuel use targeting different heights and cruise speeds. [FuelWeightVsMileage] The horizontal axis shows the amo…

Shouldn’t be too different for other (non turbo) prop planes. The most efficient speed (99 KIAS for the Bonanza) is probably different though.