I appreciate what you are doing, it’s just that it frustrates me that we shouldn’t have to do this… They should have made sure this was working before shipping.

This stick is listed as compatible…

You’re not wrong. I’m trying to drive any frustration I may feel into a temporary solution that allows me to enjoy the experience.

I appreciate your post including screenshots as well, but the basic training is just a hot mess with the hotas at the moment. I think I’ll try again tomorrow with the controller.

@NickRamCTID it’s a hot mess with controller too. Iv’e been have a problem where objectives bug out and I can’t advance.

Greats tips. I’ve found all this out the hard way though such a disappointment day one. I managed to bind the rudders to twist on stick though. Has everyone else? I looked at what axis the controller was using for LT And RT and used that for twisting the actual stick to bind left and right.

Thanks for the clear explanation of what is going on. My Hotas was delivered today and is waiting on me at the house. I’ve spent the last 2 days struggling thru the training lessons with only the elite series 2 controller for my Series X.

I’m assuming, after reading this, to maybe NOT frustrate myself by attempting these lessons with the Hotas. I AM looking forward to trying out the flight stick, however, after attempting to fly with that confounded controller…

Seems to be a ton of info on this site… Thanks everyone.

I AM looking forward to trying out the flight stick

I still prefer the stick to the controller. It was only really the taxiing lesson that did my head in.

My t flight hotas one is quite useless atm. It works fine with ace combat but on msfs, even though it’s registered I don’t seem to be able to control the aircraft. I’ve just started the game again and for the first time under the controller name it shows T.FLIGHT HOTAS ONE PROFILE. Before it just said default. I have noticed also, under the sensitivity settings and even though I’m not moving the joystick, the Joystick L-Axis 2 bar is jumping around quite a bit and I can’t get it to stay still, (you can see that the door is above the centre line). Unsure if that will have any bearing on game play though. 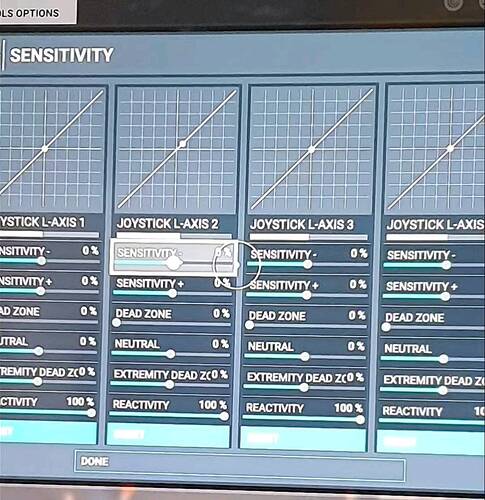 Here’s hoping. I fail to understand how all the reviewers on YouTube are using their T. Flight joysticks seemingly without any issues whatsoever. Are the problems we’re having not typical of everyone’s experience I wonder?

Put some dead zone 5 to 10% on your axis and that should stop your jumping around issue.
When you start flight Sim again check your settings are still there.

Actually I have increased the dead zones to the control surfaces but my issue with the rudder constantly moving was due to the potentiometer. I had to take it out and give it a bit of a twist and luuuube. Working perfectly now, apart from the button assignments not registering

This is a known bug. To raise attention to the hotas mapping issue, please vote here:

XBOX Series X: Buttons assignment works incorrectly for Thrustmaster T.Flight HOTAS One. I’m trying to assign button to any function in the input recognize mode - when I press any button - incorrect result is listed. For example - I press “A” but “B1” is listed in the field. For each button incorrect results provided after button pressing. Same for combination of buttons - wrong combinations appears in the field, not that one was pressed. Also in the list for manual choose there is no “F1”, “…

If you’re brand new, you earn votes by reading posts while logged in. Specifically, you need to:

To be honest I didn’t know you could set the tension (or how).

Yeah there is a small tension dial on the bottom of the joy stick side to either tighten or loosen the tension.

Thanks SofaJockey for sharing. It’s too bad the quality control is not keeping up with the Sim’s popularity., especially since the developers have had a year with the PC platform. Some of these problems are ‘basic’!

I am having lots of similar issues with the Thrustmaster TCA Officer Pack stick/throttle. The peripherals look hella sweet sitting on the desk, but I can’t complete the tutorials due to crazy bugs like the throttle not working while taxiing, etc. I wish MS would fix this, or at least that I could find a writeup like this for my stick/throttle combo. I nearly bought the T.Flight HOTAS but opted for the cool blue retro Airbus style instead.

Thanks so much for your post. I bought an XBox specifically to play FS2020 and have been getting increasingly frustrated over the last few weeks at my inability ot progress beyond 12% in Basic Controls. Thanks to your post I am now sailing ahead in the training and having fun. Again, thanks.

I have Throttle issues and Thrustmaster havent got a patch for these issues. My last hotas one has last over a year. Went and chewed the bullet for another controller just to see , but i really think its an asobo issue in the game. Pretty hacked off and the best thing is to assign key for throttles…

I am a RL Silver C Sailplane Pilot and have flown light aircraft and microlights. Even so I found thermalling in earlier versions of Flight Simulator challenging!

For the joy of scenery and flight I was delighted that (about 10years ago) Microsoft distributed a demo of its “Flight” program. It not completed to become available for sale.

Astounded by the graphics of Forza Horizon 4 demo on my PC I purchased the full version. This tended to give problems after every W10 upgrade! Opted about a year ago therefore decided to purchase an XBoxOneX.

So disappointed that shortly afterwards I had to upgrade to the expensive X Box X in order to try Microsoft Flight Simulator 2021.

The aircraft on this device and program behave abnormally. The slightest touch on the XBox controller results in the aircraft jumping slightly - this does not happen in real life day to day flying!

I have read that other users have found the same problem and suggested changing the sensitivity. Have done this with little effect but are going through the excellent training videos and taken up the challenge of flying the equivalent of a high speed aerobatic aircraft!
Adjustment of the sensitivity controls for the XBox program does not result in making the movement of the small thumbstick progressive. See there seem to be quite complex procedures to try and deal with this problem for the PC.

Unfortunately XBox X does not recognise or accept the Flight Stick (Logitech) or the Seiko throttle controls and rudder that I had for the PC!

Is the problem is ME? I don’t think so from many other similar reports on the internet- it is a problem that will not be resolved by purchasing a new stick or yoke.

OTH might get gold star awards if I can complete the training courses with the equivalent of a sensitive aerobatic aircraft!!!