My 3 most recent departure airports are stuck on the last 3 airports I used pre the infamous Sim Update 5. There’s definitely a bug here. Albeit minor in comparison with some of the other issues. Would be nice to have it fixed though.

A little off topic but may be related. I also lost my tail #. I have to manually add for every flight or it reverts back to default. I wonder if Windows security added some kind of write protection that wont the the sim save our changes. That might explain why its not happening to everyone based on their security settings. May also be why Asobo isnt addressing these issues. I dont even know where to look in Windows settings for this. Just a thought of a common denominator for some issues.

That’s actually quite plausible. There’s also an issue where people’s graphical settings aren’t being saved. Again, could possibly be related.

Nope! A correctly end flight has no affect on the history. It appears to be broken and not a high enough priority to correct at this time.

I have posted a Bug Report with Zen Desk as well as suggesting a few things more versatile.

Wasn’t it recently announced that Working Throttle is going to be redoing the entire flight planning engine? So I’m guessing this bug won’t be fixed but instead the entire interface will change…

The airport history is wrong and useless. It never shows any airports I have flown TO. 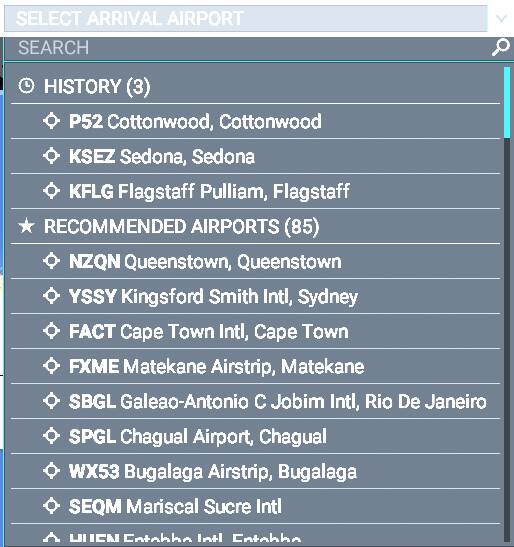 Please make it show… ya know, airport history from my logbook and not a whole list of random airports.

I am sure this has been reported but I couldnt find it, but still please don’t ask people to vote on a bug you should want to fix.

In danger of moderation here but here are some wishlist items for when someone gets round to fixing this bug.

They are going to fix this in the next sim update - “-Fixed previously loaded airports aren’t displayed in the history of the airports list”.

I’m sure you’ve seen the 4 items of the UI Chapter of the intermediate Release Notes for SU6 ?

Thanks, I couldn’t find the bug, is there a list somewhere of all the bugs they are going to fix or do you have inside info?

No I hadn’t, helpful thanks, I bet that randomised Recommended list will remain, I still cant work out what it is, do you know?

Looks like more of a focus on bugs now which is great to here.

You are welcome:) The list for the next update is here ( Sim Update 6 Flight Now Live - #2 by Jummivana ) and the link to Windows Feedback Hub is at the same page as well.

Because it is for the next update:)

The world map settings not saving is a problem. Might deserve its own thread.