Not in developer mode
Tried both Full Screen and Windowed mode

I’ve had this occur a number of time most recently in the Unalaska to
I have normal operation in the Bush flight until about midway. When the next leg begins, the Navlog opens, no way points are listed.
I had resolved this previously in the Bordeaux to Mont Blanc Bush flight by replaying the previous leg. This becomes aggravating when the previous leg is about an hour long. I’ve learned to observe the Crs in the display, to determine the next way point direction. Guessing at the next POI but periodically checking the display
I can determine the end of the leg when I see the listed runway in the display.
Unsure of what causes it, I play each leg like the previous one

Microsoft store version
Not submitted to ZenDesk yet 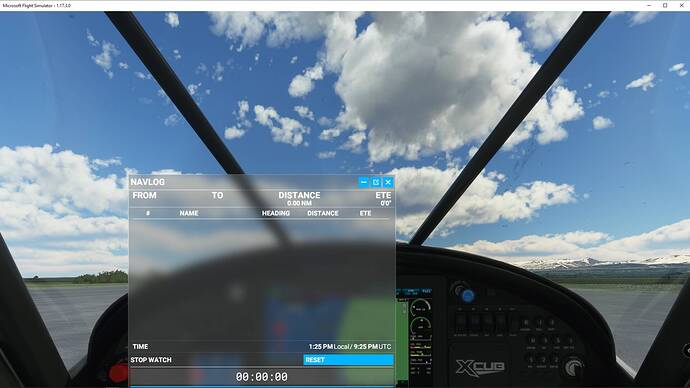 This happened to me. What I found out was that I missed an airport and landed at a different one so the leg did not complete. I had an easy time to find the bad leg because I used Littlenavmap and it tracked all my legs I found it and re-flew the leg. After that the next leg was normal again.
Hope this helps

There might be the chance I made a bad leg in the Santorini flight, that was a weird one, as half of it was at night for some reason. But made each respective landing to complete it. However, the Alaska Bush Trip had no issues that I could see.
I would hate to go back to refly each leg.
I have another bush flight to try, I might refly Bordeaux to Mont Blanc, that landing up the hill was great, it was forgiving if you over-ran the runway.

You do not have to re-fly each leg.
If you can remember what Bush Trip you were on when you first noticed the missing nav-log go to that Bush Trip and do the following.
Enter that Bush Trip and load the last leg you completed now look at nav-log is it empty? If it is stop that flight and reload the Bush Trip and load the previous leg look at the nav-log is it empty? Continue doing this till you see a nav-log that is filled up write down the leg number the next leg number is the bad one which you will have to re-fly to correct the problem.

Ill try this, though it does seem essentially what I had done before. Re-flying the bad leg.
I’ll keep my eye out for it occurring again. Though it is weird that it occurs at all.

This is quite frustrating. If anything getting lost and finding your way again just by looking at the terrain and the awful VFR map is an achievement. No one should get punished by having to refly the previous leg also.

Now I have to play my favourite game even more.

…bit seriously, this is so unrealistic, having to teleport two location backwards. Nonsense.

Another victim here. I am using Xbox Series X with a Thrustmaster HOTAS One setup. I was flying the Alaska Bush Trip and crashed upon landing leg 8. I ‘continued’ and it put me on the ground in a field a mile or so from the airport. I traveled across the ground to the airport, but nothing happened. When I decided to fly the leg over, the NAVLOG was empty. I reflew leg 7, and the leg 8 NAVLOG became populated. I reflew leg 8 and successfully landed… nothing happened except that the leg 8 NAVLOG is once again empty, but leg 8 is not checked off. My Alaska trip seems to be at an end. (Note: this is a condensed version of the many things that happened as I did not write them down while they were happening. For example, I crashed many times upon landing by applying too much braking and tipping the plane onto its nose. One of those times when ‘continuing’ it restarted me in the water. The whole experience is one that feels more like a beta release.)

Same thing here Xbox series x. France bush trip. Leg 9 landed wrong runway and didn’t complete. Took off and corrected but no completion. Can fly leg 8 with full nav log. Leg 9 is empty navlog when I start. I can’t even refly leg 8 now even if completed and landed on runway it doesn’t give me completion. I’ve flown it 3 times and can’t reset leg 9.

Please give us the option to reset a leg so we can restart that leg from the beginning.

@chreds
Please vote this topic (button at the top) SU5/SU6 and Bush Trips
and create a Zendesk ticket.

I’m sharing my experience with an empty NavLog during Bush Trips-- specifically with SU7.

Like others have described here, I made a mistake during one of the legs and crash landed. After crashing, the sim stopped and I was presented with a number of options I think they were: ‘Continue’, ‘Restart’, and ‘Main Menu’. I hit the ‘Continue’ button (I think I should have hit ‘Restart’), which resulted in the aircraft immediately crashing-- it re-spawned me in the water! Anyway, it then automatically reloaded the leg from the beginning and the NavLog was now empty. (Note: the VFR map did show the POIs and white guiding line, so I was not wholly dependent on just the NavLog in order to complete the leg).

The GOOD NEWS with SU7 is that you no longer need to “redo” the previous leg to fix the empty NavLog (per the recommendations on this thread). Simply complete the leg with the empty NavLog (if you can), and upon a successful landing the NavLog will re-populate with the next legs waypoints, etc. All is well!