Some 3rd party camera add-ons used to have this feature. Can’t remember if it was Ezdok or Chaseplane…

the 40th Anniversary Edition could bring it back…

Indeed it could… 'Bout time…

Am strongly of the opinion we WONT EVER get a basic flyby view! Asobo whilst delivering a great sim, also screwed up in so many ways. IF the basic flyby was an easy fix, am sure they would of implemented it by now…as it stands even after 9 updates and many, many requests for their beloved flyby views…STILL no flyby view. Even as a alpha and beta tester we all asked for the flyby…but nothing! Even their basic roadmap of ‘to do’s’ we get to vote on (which really means nothing), its down as not even being looked at! whilst I greatly admire what MS and Asobo have given us, with all the world updates etc, Its still got the most basic bugs like the stupid horizon bug, and lack of functionality as regards basic camera options like a flyby button, or the ability to zoom in or out of the aircraft WITHOUT having to zoom the whole scenery at the same time! I think their DRONE view was a cover up of the underlying camera issues they coded into their sim.
I don’t personally see Asobo doing a flyby now, despite our concerns.
When they sold and advertised this sim to us before its release, we were treated to all manner of 'how they were creating the most realistic sim, with realistic weather systems, engine systems and sounds etc, they even bragged about the doppler effect being built into the sound system! but what good is teh doppler effect without basic flyby and tower views? It did have lots of lovely flyby scenes, but all faked using drone views! SO they realised the importance of the basic flyby view…enough to fake it and sell it to us as a real inclusion… Then we had those realistic coral reef water maps (yet still absent in the sim after 9 updates!), and god knows how many other features they showed which are still not included.
Whilst i do love this sim and the massive potential for 3rd part devs building onto it in the future as a boating sim, even ground-effect vehicles like the Ekranoplan Orlan, real hot air balloons physics, proper thermals for gliders etc and the long awaited helicopters… I also wonder why they don’t just be honest and say we wont be getting a basic flyby!

Could not agree more.
Asobo has mostly dedicated its full attention to superfluous matters,
and almost completely neglected the most basic features of a proper flight sim.
They did not even bother to look at what was good, basic, even elemental, in a flight simulator, they did not even look into their “own” Microsoft FSX, let alone ALL the other simulators available today.

That’s a little contentious, they may well be holding it off for a reason such a better DX12 support or compatibility with the not yet finalised replay function. Only time will tell and yes I miss it myself.

They haven’t even started on it yet !!!

Watch this video,.
Packed with fly by views, ( made, according to the devs, with de drone cam) 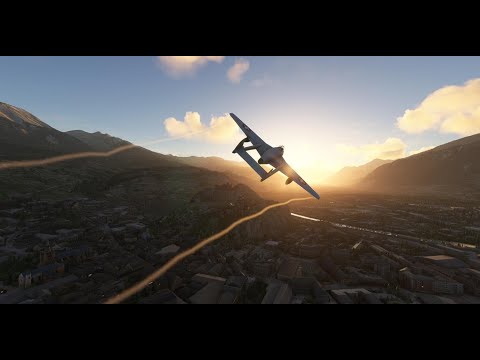 So can you record your flight & replay with various viewing angles inc tower view ?

You can. Press C

Exactly.
Before I do that, I also press the " + " key to apply some zoom-in, before I press the " C " key to control my tracked plane in realtime.
Ps. I usually place the drone camera a few thousand feet above a city, and fly indefinitely around it, and enjoying my aerobatic views above a city.

For aerobatics I would really like that locked view we had in other sims - so I could fly a loop in external view and not have it swing round twice during. Or could keep a runway in view all round a circuit (I used to glance at that view constantly if “in” something with bad visibilty). X-plane calls it “Circle View” (such an odd name for a fixed view that I never tried it for ages) and all previous Microsoft sims had it.
And yes - a fly-by and tower view not involving button-pressing witchcraft and drone operation.
maybe one day!

In older FS’s you could open up a second window and change the view, this way you could look out of the cockpit in the main window, and have a second smaller window in the corner (or on another monitor) and be able to see an overhead, or tower view or any other view that was avaliable.

That was just about the most ingenious versatile part of the older MSFS sims IMHO.

It certainly would be a fantastic addition to the 40th Anniversary considering it has been a part of previous versions of the title however I do think they would have mentioned it by now. It’s a shame because it would be useful to have sometimes.

And by the way… Has by any chance Asobo seen that
the NEW X-Plane 12 also has said Tower and Fly-By views? …

A similar topic is linked below for some more votes

The current SimConnact camera API is non functional in MSFS 2020. This is preventing 3rd party developers of camera add-ons like ChasePlane, X-Camera, FSRealistic, etc. to proceed with their development. Mark Ellis Stick and Rudder Studios

I’m sure if they just open an API for 3rd party devs to develop camera tools, we could get those views back!

I also vote for the fly-by camera and the view from the tower. And also for the ability to move more easily with the camera position. A smoother and more gradual zoom would also be better.

Out of interest, does anyone know if this has ever been brought up during the Q&As? Just having an understanding of how difficult this may or may not be to implement would definitely help. Especially, as others have said, this is pretty standard in other flight simulations.