Can we talk about photogrammetry quality?

In regard to photogrammetry, we often talked about number of cities or places that have it on Bing vs. Google. However, when I was examining the same area on both platforms, to my surprise (or not), the quality of photogrammetry on Bing is a lot worse, both in texture quality and polygon counts. This is probably why sometimes I feel the autogen is even because the polygon count could be higher and the texture is definitely sharper.

What are your thoughts?

Edit 1: Guys, I am not suggesting using Google’s data as I am well aware of the competition among all the tech companies. My focus is, what reason (data source or inferior algorithm) has made Bing’s photogrammetry representation much worse than Google’s.

22 Likes
Photogrammetry, scenery and texture loading problem!
Anyone else had this graphics glitch?
TomZ85 September 4, 2020, 2:00pm #2

I don’t know that Bing Maps vs. Google Maps is a fair comparison for what actually happens in-game.

Doesn’t mean that level of detail is the same between Maps and MSFS, nor does it mean that a given LOD is appropriate in one just because it is in the other.

I raised this question because this is exactly what I saw in MSFS when flying low.

I thought it’s my internet or LOD issue but found out it’s the same in the Map app.

Because of this, sometimes I found autogen produces better image quality than photogrammetry. However, if the quality is up to Google’s, then it would be the best of both worlds.

Google is just in a whole different level. I hope with the overwhelming number of sales, they can invest and boost Big maps. It’s definitely a work in progress so I don’t mind waiting but it needs attention.

Right now all the photogrammetry buildings have that melted look. It’s a mess. Hope they fix it soon.

Yep…it’s so unfortunate because if you fly around a city after a few passes it looks pretty decent - but if you’re not sightseeing, watching those melted buildings appear in the distance just ruins the experience. I switched over to the autogen for now I think it overall is more realistic as a plausible world.

well, if we’ll write letter to elon musk, about this, he can launch some stuff for shoot some places in the midday without shadows, especially for this game, but we have to good motivate him, and make him some addict from this sim… i think free internet can wait, if you’ll ask me…

Yeah, sure, let’s increase the detail level of the photogrammetry while most people are struggling to maintain 30 fps. I guarantee you they have limited the max detail level of photogrammetry to keep the sim playable. You go increasing that ■■■■, you can kiss your frame rate goodbye. Oh, and don’t forget the increased bandwidth usage along with that extra detail.

Microsoft and Google are COMPETITORS.

If MSFS uses Google Earth photogrammetry data, it’s an open declaration that Microsoft themselves admit that their satellite data is inferior, which they’ll NEVER do.

The sooner you let go of the dream that MSFS should adopt Google’s photogrammetry data, the better off you’ll be with MSFS.

But I do agree with you that Bing should step up their photogrammetry coverage and quality.

I’ve been honestly pretty disappointed in the Photogrammetry quality.

I love the concept, but the “melted” look is just completely ruining the experience.

in the year 2008 i played crysis with 14 fps(heavy place) at max settings, so i can handle lower fps without that ugly things all around, you can every time drop your settings, but if it will stay so ugly we can not up settings for recover it, problem not only with that potato buildings somewhere, problem with wrong map generation, where shadows become rock gollums army around all city, it was fun first day, but the more i see it, the less it fun for me

Maybe that’s why helicopters were not included in the initial release… flying low over Photogrammetry.

I would recommend you stop playing FS2020, go back to default Xplane or P3D to check how it looks in comparison, and then come back and stop complaining.

Do you mind if we share some frustrations and have discussion about it or do you just insist on shutting down the conversation and telling us all to go away and be quiet?

you have to take into consideration that nearly the entire world of Bing Data is anywhere from 6-15 years old.

resolution and capabilities in even just the last 5 years as far as world 3d data has come a long way.

Google’s entire world data comprises of 20.37 PB of imagery and object data, Bing is 2.71 PB, nearly a 10th of what google has. that alone would almost undoubtedly break FS2020, or drive minimum req’s 2-4x higher just to use the highest levels of details, particularly in bandwidth and graphics capabilities.

and since Google is competition to MS, of course by default we are not going to get Google quality world data. Asobo was expressly prohibited from even attempting it per MS.

Even in urban downtown areas,

I can prove it is old data.

In Atlanta Georgia, the “Georgia Dome” was demolished and imploded in 2017, well the sim still has it fully erected as if it still standing to this day. in fact, you can even see the Mercedes Benz construction site that was right next to it for many years. and even at that, the completed Mercedes Benz Arena sat side by side with the Dome and the sim does not have it. the rooftop of the Arena was fully installed by 2017. 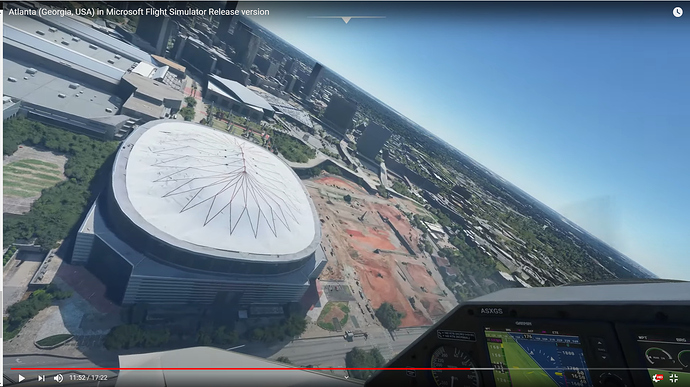 This image, is taken from a youtube video uploaded by a fellow FS Simmer, notice the site to the right of Georgia Dome? thats what the site looked like in 2014-2015. 5 year old data in a downtown area.

We have more tha 200 threads complaining about the most ridiculous things, from a guy that said that his house was not the right colour to this thread saying Microsoft should use google data instead of their own company (Bing Maps) that was created precisely to compete with google.

We are never going to see google maps implemented in-game and as long as Bing map is not able to take better pictures for photogrammetry we will not see its quality improve.

Since Bing Maps last update of most cities was from around 6 years ago it seems unlikely work is being done in this regard.

We are never going to see google maps implemented in-game and as long as Bing map is not able to take better pictures for photogrammetry we will not see its quality improve.

oh its definitely possible to use google’s data, but you are going to have to convince a 3PD to invest the time and money needed to get the licenses to use that data. and then they are going to have to convince themselves into marketing a product that will restore the expenses of getting such a license from Google, which is easy said, a single use license for Google’s 3D Data for productivity work is in excess of 20 Grand.

the imagery is free public domain and easy to access, the 3D world data though, is licensed out by Google.

and the fact its 10x the size and complexity, would bring the sim to a crawl performance wise.

We have more tha 200 threads complaining about the most ridiculous things, from a guy that said that his house was not the right colour to this thread saying Microsoft should use google data instead of their own company (Bing Maps) that was created precisely to compete with google.

I agree - there are ridiculous threads…

But this is not one of them.

It’s totally fair to have a discussion about the current quality level of photogrammetry and share our frustrations with it and hopes for changes over time.

That’s the whole point of a discussion forum. Not everything is going to be sunshine and positive chit chat. If this bothers you, may I humbly ask that you kindle move on from this thread and leave the rest of us to discuss the topic?

But what if they got some heat from competition and instead of bugging Microsoft, we bugged Google: “Hey, Google. You know you could make a flight simulator.” And Google would be like, “I just came up with a brilliant idea. I could make a flight simulator”. Google supplies the infrastructure, finances, and data. Grabs the Laminar guys to do the flight model (and only the flight model). Poaches the Active Sky guys who were jilted by being excluded from this project to do the weather. And a game studio that does the lighting, effects, 3D modeling and only the lighting, effects, and 3D modeling. Then we’ve got a photogrammetry arms race, and the simmers win.