CaptainSim 777 - Takes liveries down, steals them and reuploads them

Here is the LINK.

So worried about faulty liveries for their faulty 777, but still publishing them

Wow.
I though I understood enough of this “developer” many posts up, but this is almost painful.

Basically what this person says on the forum is: “we got your artwork (which by the way is of low quality and you’ll need to update it), we’re offering it without your permission (and you still need to fix it according to what we say) and our own copyright policy applies to your work”.

And the copyright policy needs to be framed and hanged as a reminder to:

I’d post a screenshot I took of their website, but I’m inclined to think that’s also not allowed, so you can have a look at this masterpiece of modern commercial literature here: Captain Sim – Copyright Policy
…point 9 man

This is entirely unenforceable unless FlightSim.to signed a contract with Captain Sim agreeing to those terms. I really hope this backfires on Captain Sim as this goes entirely against the interests of the MSFS community.

As I gather from the Captain Sim website, they have no licence to model or use Boeing aircraft or their name. I’d say it’s pretty hypocritical for Captain Sim to then behave like this.

I know Asobo want the marketplace to be buyer beware but there’s so many cash grabs like the 777 in there that it’s a nightmare for the average user unless you carefully read the reviews on the MSFS forums beforehand. Devs who behave like this don’t deserve to have exposure on the marketplace. But I know Asoby will never reconsider.

I would think they don’t stand a chance. But I’m no lawyer.

The silly thing is that this Captain Sim is doing the exact same thing with an Asobo product: slam their own faulty airplane over it. They have no problem doing it to products of someone else apparently. The only difference is that it isn’t free.

Asobo and Microsoft should not permit Captain Sim get in marketplace due “livery crisis”. 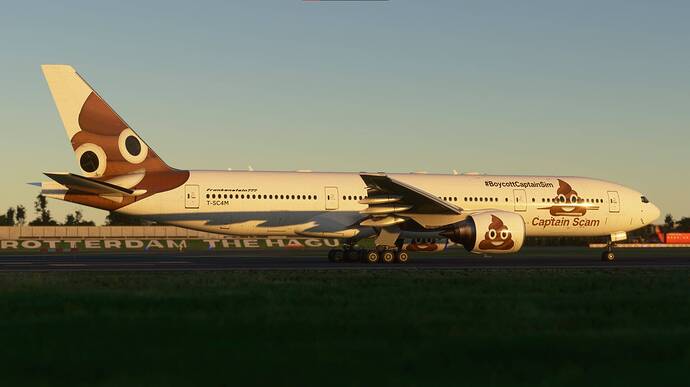 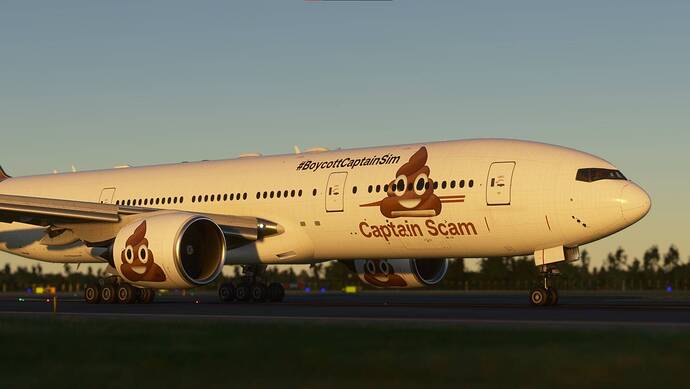 That would actually look amazing in a massive group event flying a squadron of Asobo’s Boeing 747 over CS headquarters… too bad this ‘company’ doesn’t even list its business address on its own website.

Also, wonder if they’ll appropriate this livery like they did the rest

That release is really BAD, but having created a new meme is also priceless.

Captain Sim = why is freeware so much better than our planes?

Yeah, they are like “lets use Asobo’s property and make some money…we don’t need to ask them…wait…there are free liveries for our hybrid plane? CALL MY LAWYER!”.

WOW, this CS drama is becoming EPIC man, its not going to end well for them sorry. Talk about shooting yourself in the foot. Hey can we start a class action lawsuit because the doors don’t open. HAHA that’s against FAA regulations

And now we wait for the takedown notice from CaptainSim to Microsoft!!

That was not on plan, but now it’s sound like a good plan

I am honestly at a loss from this story. I don’t remember this ever happened before.
“Сaptainsim threatens to sue the resource administration.”
What is the chance that the court will accept the claim?
But I am also worried that Сaptainsim will take over all the free liveries of other creators. It’s just stealing someone else’s products.

They did already. They have re-uploaded all our liveries to their platform

if they had been smarter, they could have marketed it as not an aircraft, but a new sort of scenery and put it on the FS2020 marketplace for well, the price of an airport and even included some AI static models to spice up airports a bit. Im no hater but …

Posts were moved from the CS 777 review to here, to remain focused on the liveries issue. Let’s keep the conversations distinct. Thanks.

I’ll row a boat rather than use one of their ‘planes’.
98% someone else’s work - cheek to charge an elevated price and then pursue freeware folks from dressing it up a bit, and community websites from hosting it? Captainsim, you’re sunk. Call the lifeboats.