which I don’t understand now! Why don’t you switch on Gen. 1&2? That’s what you do before the Aivionics

immediately after starting the engine. You can also clearly see the true lights that are constantly on… - Of course, the battery doesn’t survive this for long

i switched them on after take off, forgot to do so

You know, when you record something you ALWAYS forget something

I had to start the record 5 times, 2 times the cat came over me so i had to stop.

Anyone having huge fps drops/lags on approach? I think i found whats cause it… its something to do with that approach itself. Maybe navigraph waypoints or something is bugged. For me fps drops starts at that very moment when my approach starts, and when i delete my flightplan fps is back on normal.

one more tip: after booting all systems

once Stby.Bat. off - on and the correct Amp are displayed…
I always do this at the runway breakpoint.
Unfortunately this is still the case at the moment, needs an update

Is there a way to set the TDS GTNXi as the default panel in the PC-12?

Yes, either the PMS GTN750 or the TDS GTN750xi can be set as the default by adding a line of code to the .FLT files as outlined in THIS POST shared by user Cygnifick which was posted quite a ways back in this thread.

Be advised though, the string of code in that post only works for making the PMS GTN750 the default. To make the TDS unit the default, add these lines to the LocalVars.0 section of the PC-12 FLT files instead:

That worked for me. To cover all boot scenarios, I’ve added that to all my PC-12 FLT files (i.e. approach, apron, climb, cruise, final, hangar, runway, & taxi) and it now loads the TDS by default.

Here’s how it should look when you’re done: 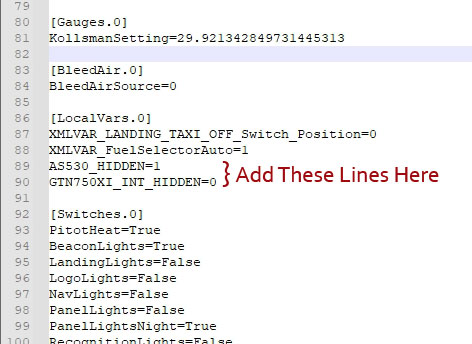 Remember, don’t alter any other lines of code already in the LocalVars.0 section (usually there’s only 1 or 2 lines, depending on the type of FLT file), just leave them be. Just ADD the two pertinent lines at the end (as illustrated above) and you should be good to go.

Tried some STOLs out of Cat Cay MYCC.
Barely got enough speed and lift to clear the runway and was almost fish food.

I hope they patch this one for more torque.

EDIT: I tested it myself with 4 passengers with some luggage, no drama here Microsoft Flight Simulator Carenado PC-12 MYCC - YouTube

I also really hope that the power and the flight model will not be tampered with too much in an update.

That worked. Thank you.

You have to set the Altitude, then press the V/S button (labelled ENG for memory, with vs on side), then goto the INNER dial on the right of the screen (alt is adjusted on outer dial), wait till the arrow changes to finger, click the button, now adjust FPM up and down (theres a small arrow on left of screen saying whether its FPM up or down), and make sure it says ARM too, hope this helps

For those who haven’t figured it out yet:
you can make your own cockpit camera where you stand in front of the aircraft at the cockpit door. You can then click on the door at the top left and open the cockpit door from the outside

I’ve been wanting to try this out for days, but unfortunately I’ve always forgotten

Hello. I would like to share with you a problem that I have been experiencing since buying the pc-12 on xbox. No gauge, pressure or amount of fuel, or even ITT appear. Even when pressing the “test” button, no gauge appears. I don’t feel like the problem is recurring for everyone but it’s blocking for me. Do you have a solution? I would like to point out that the engine and the procedures were followed. It’s really a display-only issue. Thank you.

Problem was solved thank you. I had to select legacy controls.

Odd. I am not getting that. In short take off you need flaps 30 and trim set properly. This has a lot of power per the manual. I am flying in mostly short fields on this…

No, they need that over a 50ft obstacle (i e. a 5-storey building). That’s a huge difference. In St Barts the Tradewind PC12s often take off within 2/3 of the runway, which is about 650m long.

Flown this beauty up the African West coast now in Spain. Enjoying the model very much. 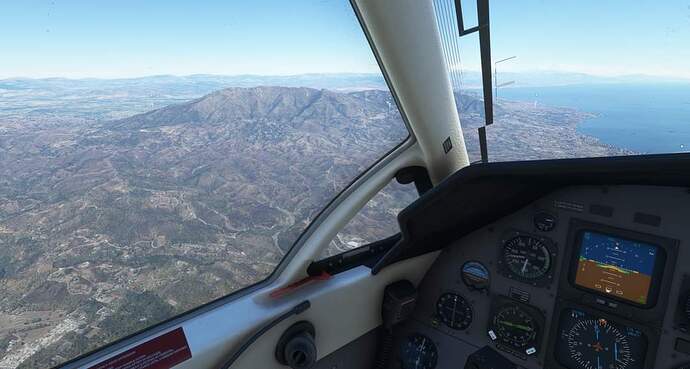 But what is the takeoff weight on that tradewing ? Just what i tested in that video, carenado pc12 can takeoff from under 400m runway if not at full TOW.

Just tested MYCC with a cross wind. Took off with runway to spare. Easy.

I do not have the carenado pc12 and I’m not disputing that changing to legacy flight model fixes the issue. I have no way of knowing. What I would caution you on though is that this is almost certainly not intended. Carenado are not designing planes to need the legacy flight model and using it will almost certainly break other things in this aircraft and certainly on other aircraft if you forget to change it back.

Legacy mode is for lazily converted fsx planes only and frankly most people think it shouldn’t even be there in the sim especially since its having options to select while modern has none can give a false idea that it is better.