Aside from the Skylane all my Carenado planes have issues since todays update.

Moony isnt fixed, now the Autopilot Alt selector causes a CTD
The Pa44 EGT Gauge does not work at all for me.

Is any of this getting fixed?

Suggest you let Carenado know. Issues with add-ons are not Asobo issues. They developers just need to do catch up anytime there are changes. If you don’t let them know they may not fix it.

Sorry but its sold through the MSFS Store, Carenado choose to sell through that store, That store dictates when updates are available, If they sold on simmarket etc then fine, but they dont. Carenado is a partner and therefore it is ASOBO’s problem too, maybe not to fix it, but they need to be saying something, or get them off the Market place.

If you a buy a Samsung phone in a non Samsung shop, you dont get told to go to Samsung when you get home and its broken. ASOBO either need to their kick their ■■■, or stop selling their stuff as it doesn’t work, or give them a way to push out rapid updates. Sorry its both their problem. How about we give them a real problem, and dont buy their stuff any more. The moony has been broken for 2 updates now.

Actually, yes, most products say in the warranty/guarantee… “Do Not Return to Place of Purchase”.
The SDK is provided to developers, by Asobo. The developer creates a product. Asobo gives them a place to post their product, so you don’t have to go hunting. That does not mean it is Asobo’s code. It does not give them the right to muck with the developer’s code.
Just let Carenado know there is an issue since the update and I am sure they will appreciate it.

If one of your phone apps is bugged, you don’t contact Apple or Google, you contact the developers of that app. Regardless of you buying it in the App store or Google Play store.

Oh my god, The product is not an app. Everyone has contacted Carenado, many people have. Also in th example of an app, if it gets too many complaints they remove. But here is the thing. The App devs and the phone OS devs communicate. This is the second update now and the plane is broken. Carenado also said the fix would be in the update!

Like if you guys are going to defend this then fine… Defend it, but its wrong. ASOBO should either be communicating addon breaking changes to 3rd parties as all companies do, or telling them to fix their planes as Apple and Google do.

Id love to have customers like you guys…Sorry your plane crashed, we used the wrong Algorithm from some genius, never mind not our fault, we only use the Algorithm in our Avionics!

Carenado is likely already working on the fix, and I’m sure it’ll be available soon.
Only Carenado can fix it, nothing Asobo or Microsoft can do.

Well, they could pre-release the sim to third parties first, allow them to make fixes, and have all of us waiting for another week or two for the third parties to catch up before releasing the patch to the public.

I prefer the way it is currently.

If you don’t like the way things are currently, and you’re getting this upset about it, maybe it would be smart to step away from the sim for a couple of months, until things settle down a bit, and patches will be more minor.

On Nov 12, they said they had submitted their fix for the Mooney to MS and it would be available for update in a couple of days.

Either someone at Microsobo has severely dropped the ball on this, of Carenado feeding us BS. Unfortunately, there’s no way to know.

Huh? Have you ever done a sim before? Contact Carenado, they’ll be the fastest route to fix the issue. Same with the A320 – Asobo isn’t a plane maker, clearly… they need the experts to fix these things when patches come in.

But its not Minor and its every month, How is using the Alt controller Minor, it was the OBS before? Its just getting astonishing that this is the case every update, and by the way a CTD is not minor. Why would you prefer it this way? Do you have any add-ons that dont work? Do you mind paying for things that you cant use?

Are you kidding me? wow this forum

But dont worry its ok, the fan boys are here to defend ASOBO and silence those who dont want to live in a make do life!

I accept the fact that on updates, any mods (purchased through the ingame store or downloaded from external sites) might break, and I give the developers of those addons a couple of days to fix things.

The base sim works great, which is the main software I paid for.

I am not a fanboy. (A) - go outside and take a breath (B) we’re trying to help you get your issue solved and guess what, complaining on the forum here isn’t going to fix your issue - Asobo clearly does not know planes © contact Carenado and they will probably have a fix out.

Yes I agree a week whatever, but 2 updates, a new plane which is now busted before fixing the previous plane, the power goes off now after engine start PA44. Yes we can all put up with so much but this is becoming a joke, ASOBO need to handle this better regardless they are the gate keepers. The main sim works great?? Can you tell me what you are doing with your please? Tell 50% of this forum please.

you are not trying to help. You are giving me smart answers telling me who’s fault it is. Do you not think I have not sent a ticket. What I need to do is stop buying add-ons, or maybe just dump this sim for a year

But thank you for helping

Vote with your wallet if you’re unhappy, and wait for other third parties to release aircraft. 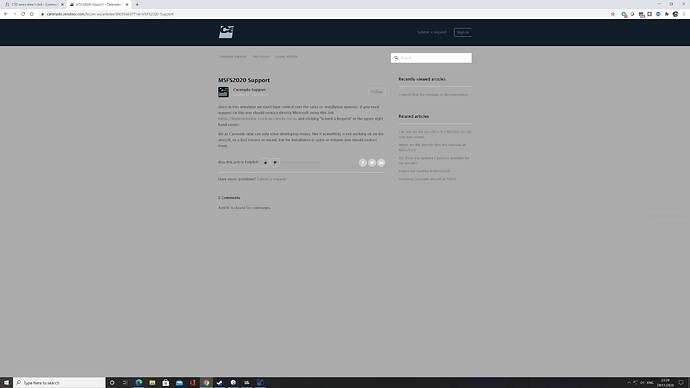 But they dont answer or help. They all but redirect you to MS

I’m really getting fed up by the way people on the internet just rant about their own insignificant tiny little view of how the world should work, while not listening to any other people who have a different opinion. Thereby ignoring the opportunity that other people might have a better grasp of the issue.

A forum is supposed to be about the exchange of knowledge, and henceforth about making progress or even finding a solution to a problem. So in my humble opinion anyone whose intention is just to rant, blow off steam, have his or her own opinion validated and then to insult the people who want to offer a different opinion, should be summarily ignored.

Sounds like the problem you’re having is with ‘something not working ok on the aircraft’, so by their own words, they should fix it.

Again, it also sounds like you should just stop purchasing Carenado’s products if you’re unhappy with their service.