Please add the missing runway 09C/27C to Chicago O’Hare. It’s supposed to be a perm deluxe airport and is missing a runway which is now regularly used making the base unusable with vatsim. Shouldn’t have to pay for an add on to fix it when it’s already in a list of airports that are at a premium with the game. 9C/27C is the runway. It’s made even more ridiculous now that the sim includes the navigraph data for that runway but it just isn’t there.

There’s been a lot of work done at O’Hare the last few years that’s not reflected in MSFS. I think 27C is currently being lengthened and is offline, but still available in the simulator.

Along with your request, I also hope they correct the ILS frequency for 28C too.

yeah, i get that they cant keep up with everything but a missing runway which now seems to be the main in use makes this airport unuseable with VATSIM, the solution just seems to be “buy fs dreamteam version” which is disgraceful considering to have this “hand crafted” O’hare in the first place you had to buy a more expensive version of the sim.
27c is not in the sim its completely missing, and it opened in november 2020. 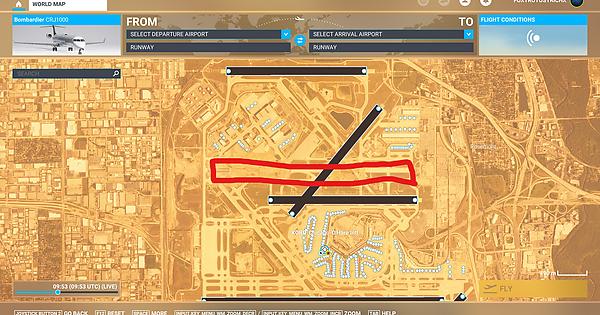 Right. It’s 27L that is currently closed for construction.

Got cleared by VATSIM tonight to ILS 27C only to find that it’s missing in the sim! The LOC and GS signals worked though…

I’m guessing you have a Navigraph subscription. It has all the nav data.

I’m told that many VATSIM users have installed the FSDT O’Hare add-on so they have some pavement when directed to 27C.

I’m waiting to see if they fix this on the next World Update / Sim Update before I spend any $$$ on FSDT’s pay ware.

I’m guessing you have a Navigraph subscription. It has all the nav data.

i resorted to buying fs dreamteam KORD its amazing but shouldnt have to do this for such a big and BUSY airport which is part of the premium airports. The missing runway also seems to be one of the most frequently used.

Interesting, Yeah I don’t use VATSIM so I never get cleared to takeoff and or land at 09C/27C using the default flight planner or Simbrief. However, since FSDT has 30% discount on their airports ending Friday 31st March; I figure I just go ahead and get it anyway (since it’s a great scenery) rather than wait for an update.

I finally bought it, and got a Navigraph subscription too.

I’ll admit, it felt odd having to pay third parties to fix something so fundamentally broken for so long with the stock sim, but in the end it was the best option.

I mean, there are more rwys options to land in KORD, you have the 10C/28C which is the most used rwy to land, if you’re flying in VATSIM just request other rwy if they assign you 09C/27C. KORD by fsdreamteam is an amazing add-on for the default airport, even if you have the premium deluxe edition!

Are you guys able to get arrivals and departures in MSFS into ORD? My sim doesn’t show any and I am using the FSDT ORD and I use Navigraph. I have watched some tutorials on how to fix it with no luck.

Yes it’s working, and I have both as well.

One thing to make sure of is the order MSFS loads the packages.

In your content.xml file, make sure Navigraph is loaded after the FSDT KORD package.

I had an issue with the fsdt airport not showing up recently, turns out if you’re using the marketplace version like my self you have to remove the default airport from content manager.

I’ve been getting CTDs when I try to load in to FSDT KORD. I tried to remove the Asobo KORD, but I removed my entire Deluxe content by accident!

I can fly in and taxi around the FSDT KORD - I just cant spawn in there in any circumstances without a CTD on the loading screen.

Do you have a link to guidance on how to remove the Asobo KORD? I’m assuming this has to be done via Win Explorer > Offical Packages rather than the in-sim content manager? Edit: I tried to remove Asobo KORD directly from the Official, but the installation manager just put it right back in the next time I launched MSFS. I did read in another thread there was no need to delete the Asobo KORD (although I did have to uninstall the Asobo LSZH as that was showing at the same time as my FSDT LSZH)

I didn’t delete the Asobo airport when I purchased the FSDT addon. However I don’t remember the last time I spawned there.

What aircraft and what gate did you try?

Many gate and runways and different a/c. Im in contact with FSDT who have recommended uninstalling the Asobo KORD, so just going through that process