Is it normal to see what looks like a light foggy layer from above 10,000 feet when flying in VR? I would like to sometimes see further distance in VR but when i change to clear skys and set density to 0, there is still a transparent white layer between me and the ground, especially with sunny days. Is there another setting?

I feel like since the last SU when they changed the fog, it’s now a lot more common to see a light haze or whatever. Maybe that’s it

I clean my glasses (spectacles) before putting headset on.

Have you tried it at a bunch of different locations? Maybe try taking off from somewhere really dry like the desert or something (Arizona). I’ve flown VR quite a bit and I don’t recall seeing it.

Good idea to try some different locations. It’s clear after take-off and VR looks great but the higher I climb it looks like a “smoke” layer instantly forms. I will also see if I can mess with my settings. I know i have it set on clear skies and have moved density to 0.

I was thinking the same the other day, even with fully clear weather settings there was quite a bit of haze. I wasn’t sure if it has always been like that, interesting you noticed the same

I complained about this exact thing here.

I don’t understand why there is this incessant haze. Its not realistic if you ask me. Its a gamer/photographers impression of the world .

Real pic from june 2020 domestic flight in norway. It is not supposed ti be crystal clear… Thats not what it really is like. 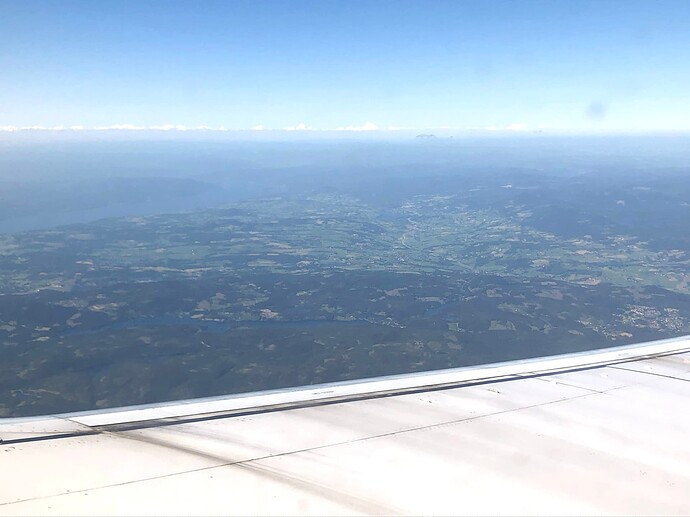 I’ve done plenty of flying around the world and this is not how the world looks to me outside of the plane. Maybe if I saw the world through my camera lense, but I don’t, I see it with the human eye.

If you try to google «clear view from plane», «wing view» or similar, you will have a hard time finding any pics without a layer of haze.
There are atmospheric conditions that give a clear view towards ground/distance also, but this is the exeption not the normal.

I know, myself included, that we chase the image clearness without the blurry distance, but as a simulator trying to replicate the world as-is, the haze is actually part of it.

I’ve climbed/ hiked mountains all over the world, only in very few super cold environments have seen little or no haze.

The only annoying thing is that the haze in the FS is rendered inconsistently on both eyes. But the VR in FS reminds me not only here on a “Trip”.

Bingo. I agree with this that there is a little too much haze. It would be nice to select or de-select the haze. Sometimes, you just want to see the view realistic or not.

It’s possibly helping the FPS by not needing to provide the clarity all the way to the horizon, and possibly allows it to disguise the layering of some 2d objects till they get close enough that they need to switch to polys