it showed that I was limited by the RdrThread

Sure, fair point - this is much better than the common “my FPS is low here’s the Afterburner screenshot” posts.

But with my current performance drop after a while, this is no longer the case - the in-game FPS tool says “limited by main thread” but the main thread milliseconds is still ok.

PilotDaniIP seems to be skipping from one problem to another.

May be that one is the results of the other…
It’s not clear also for me, if both are correlated.

I’m actually (after SU5) have a good FPS improvement
I lock the sim at 30FPS cause mine is not an high end configuration for gaming (RX590 eGPU connected to a business laptop i7-8565 with 32GB), and anyway I’m connected ad monitor to an economic LED TV

It seems not in my case, considering an average CPU utilization is under 60%

I’m re activate again the developer mode to use in game FPS tool.
ASAP I will update also the SDK

I suspect there is an issue with framerate impact after MSFS as been running for a while, but this is a very specific issue that will take detailed info to clarify. As a total guess, this issue will be CPU-related, but we’ll see.

My configuration is particolar (eGPU connected by TB3 port), but it seems that I’m not the only one that have a performance drop.

Departed by about 35 mins.
All seems ok, except that my old problem is back (sometimes it freeze for about 1/1.5 mins - and flying online that sounds really bad). 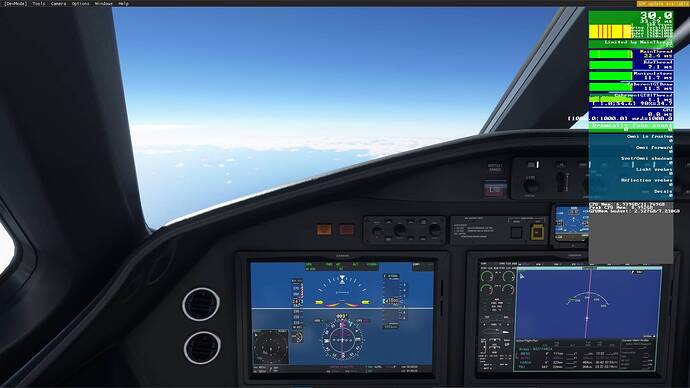 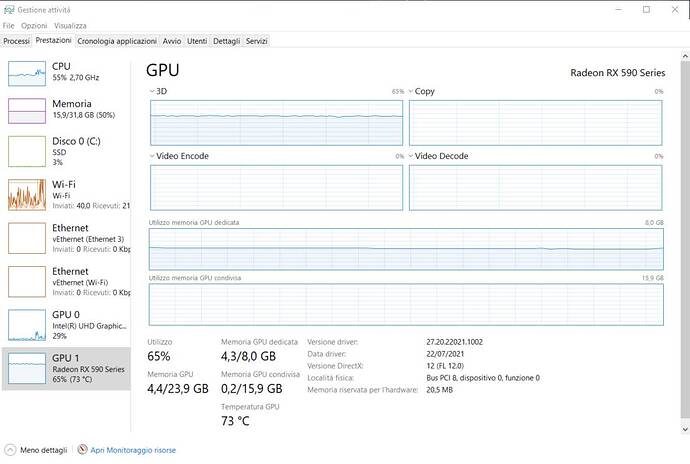 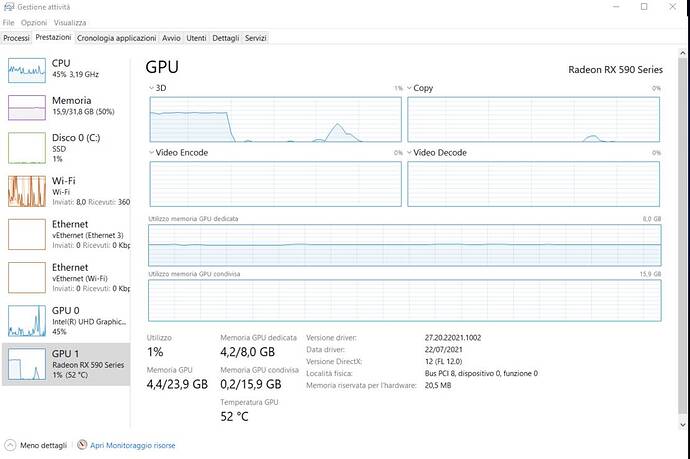 Perfomance drop after a couple of hours (only for few seconds)
temporary sistuation, but longer is fly, higher is the problem. 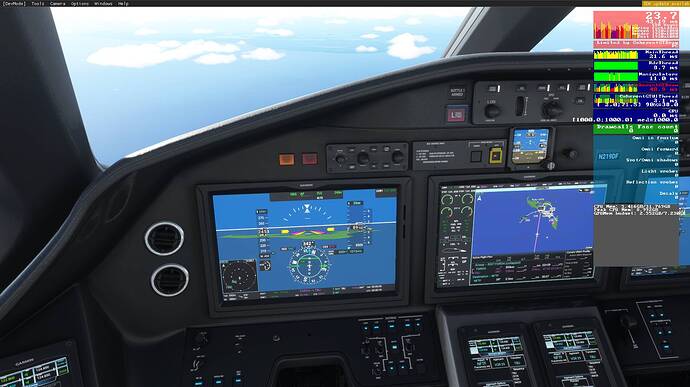 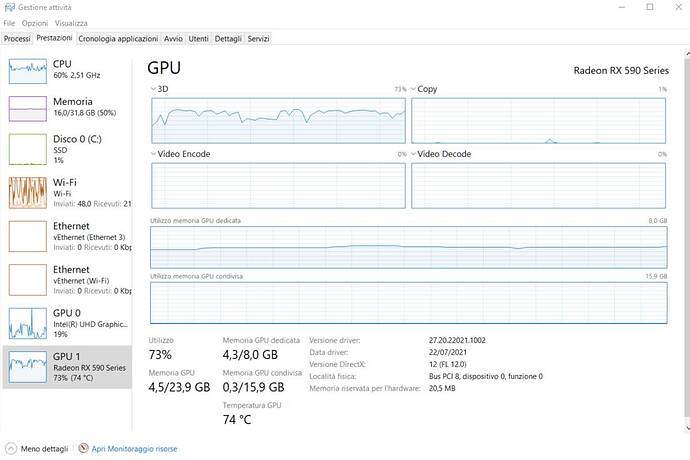 In the last two photos, your performance is limited by CoherentGTUIthread and CoherentGTDraw. There doesn’t seem to be any correlation between these and CPU or GPU utilization or any MSFS graphics settings. There must be something slowing things down in the code.

So if MSFS said “limited by Main Thread” and FPS was 25, I’d see a Main Thread ms more like 35ms.

But with my current performance drop after a while, this is no longer the case - the in-game FPS tool says “limited by main thread” but the main thread milliseconds is still ok.

I think your calculation is a liitle off. If 25 FPS, the render time should be 40 ms or a render time of 35 ms should provide about 28.6 FPS.

The Developers FPS Counter tool was significantly changed in SU5. None of these changes were documented in the release notes. In addition, a number of performance improvements (changes) were made in SU5. These changes were not documented very well. Making performance changes and Developers FPS Counter tool changes without giving us specific tuning guidance leaves us scrambling to find assumptions on the new bottlenecks. Not good IMHO.

I think your calculation is a liitle off. If 25 FPS, the render time should be 40 ms

I understand what you mean but that would only be correct if there was no other overhead involved in rendering each frame outside the time recorded for the main thread (assuming ‘limited by CPU’). In practice you have to add a little bit to the ‘limited by CPU’ ‘main thread milliseconds’ to get the actual FPS, e.g. add 5ms (that seems about right on my 9700K system but I’m not pretending it’s accurate or valid for all frame rates)

@PilotDaniIP you definitely have a CPU problem (i.e. not GPU).

Your CPU is clearly getting whacked by the code in the flat panel instruments (CoherentGT Draw) and running the sim itself (Main Thread). Maybe it will be worth looking at the Windows Task Manager when you see that to confirm how busy it says your multiple CPU’s are - the average CPU usage might be quite low but one CPU might be pegged at 100% - at least that will clarify how Task Manager reporting differs from the in-game reporting.

A possible test would be to fly the Cessna 152 which has plain animated ‘steam’ gauges and compare the FPS tool performance there.

But my CPU doesn’t appear overstressed.
By my point of view seems something that it’s not optimized in GoherentGT lib. 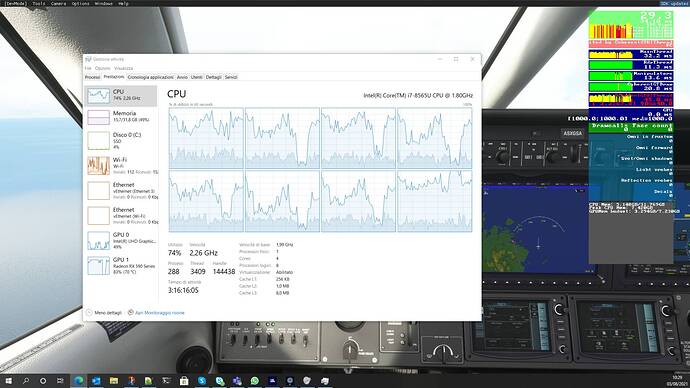 Anyway, I will test the C152 as suggested. 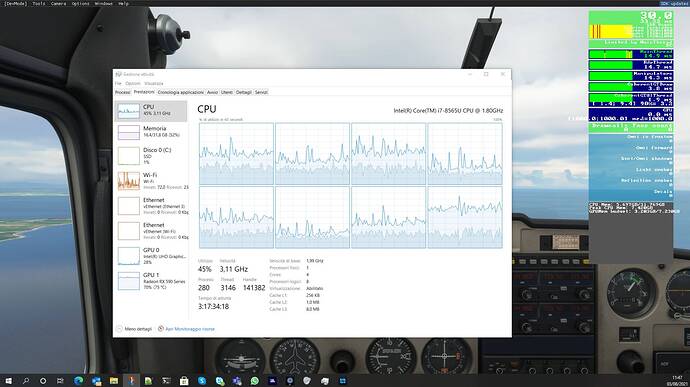 ====
Just for test porpouse
There after 15 minutes VSync OFF 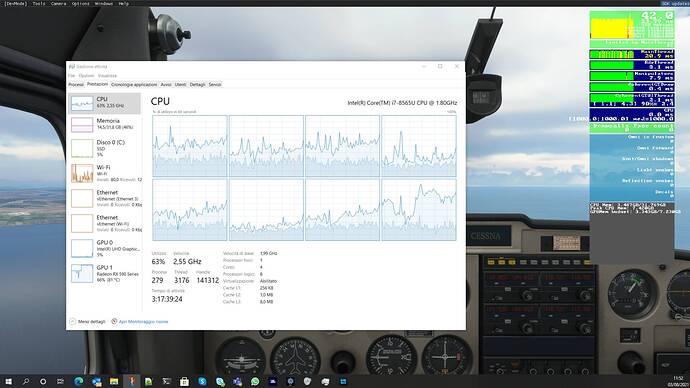 We can see total GPU utilization and FPS increase.
Now I revert to my default. 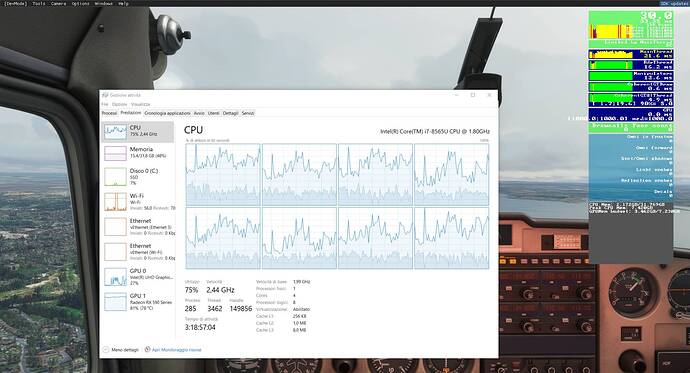 In practice you have to add a little bit to the ‘limited by CPU’ ‘main thread milliseconds’ to get the actual FPS, e.g. add 5ms (that seems about right on my 9700K system but I’m not pretending it’s accurate or valid for all frame rates)

The “main thread” overhead is already taken into account. Any delay (overhead) in the GPU getting what it needs to render a frame decreases FPS. If the GPU has everything it needs to render a frame GPU utilization will go up. The FPS Counter is only measuring the difference between the time a frame render “enters” the GPU to the time it exits the GPU (latency). These numbers are fairly accurate before SU5 verified with other FPS counters.

Daily screenshot, after a couple of hours of flight, generally if I do not touch anything my sim run at bout 29-30fps, (using about 70% of GPU)
BUT
if I open a web page (as example to read approach charts) or (as in this case) I get a screenshot… 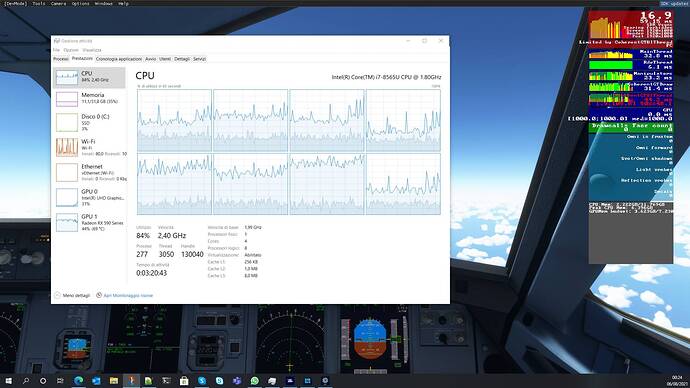 Definitively it’s not a lack of resources (CPU/GPU/MEM), there is something wrong with the CoherentGT UI Thread.

After SU5 when it happen my Audio “crackles” and “drops out”. 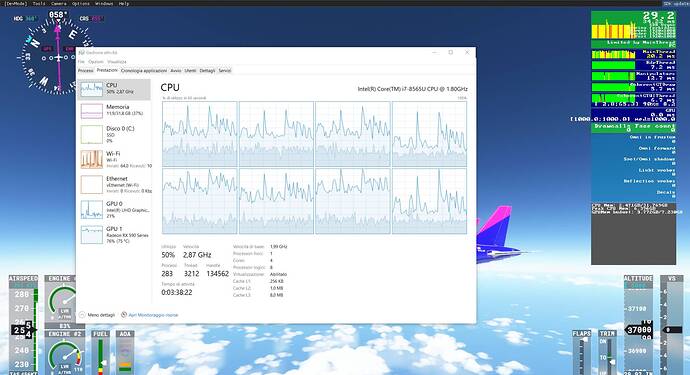 Actually, I can only hope that with DX12 will change something… (and that’s sometimes is more annoying that FPS drop…)

Also getting this on long flights, with audio crackle and single digit FPS drops when panning. Have tried fiddling with almost every setting possible - traffic, online services, render scale, graphics settings, PFD refresh rate etc etc, made no difference - well PFD refresh rate changed the behaviour of the bug slightly (as you’d expect) but didn’t eliminate it. Appears to be the same bug that was happening with the 787 previously?

I wonder if this is relevant? Improve your game UI performance with Coherent GT asynchronicity

In the previous version of dev mode there was only one counter.
Anyway actually I agree with you

With the today update (17 September) is partially back the issue.
Sim seems really stable during the flight,
BUT

From External view 30FPS (locked by SW)
From Internal view (with a glass cockpit aircraft, so Coherent GT lib) 20fps and GPU locked at 65% as max…

Not bed, but not optimized.
I hope in DX12

I will test it better in the next days

At the moment DX12 seems more a problem that a solution.
SU7 degrade my performance…

Hoping in next(s) SUs and WUs…

I have exactly the same problem with Low performance like you described. Below is a little more info about the problem which I found during testing but they appear only on A32NX aircraft.
During outside view everything is normal (good FPS, GPU load between 90 - 100), when I changed on Cabin View, FPS dropped due to CoherentGTUIThread limitation and GPU load was decrease to 60 - 70.

I have installed A32NX 0.7.3 the latest DEV version and a problem with low FPS due to CoherentGTUIThread limitation. During T/O the value of the CoherentGTUIThread increase on 45ms (MainThread=20, GPU=18) and this is the reason that I have FPS below 30.

The value of the CoherentGTUIThread is changed during the different phase:

On all other Aircrafts CoherentGTUIThread is normal and have not impact on FPS and GPU loads is 100%.

I havent looked in to this, but it triggered me to learn to know more of it. And although i have not read carefully this site it seems that there is a lot to find here to the subject of matter.
https://coherent-labs.com/Documentation/cpp-gt/d9/df1/performance_guide.html
Maybe here you can find answers related to CoherentGTDraw and understanding how it is related to the sim and Java script.
I do not know if or how it is related to the importance of updating Java
But there is plenty .js files
First i would change aircraft if it solve the problem than it might be the issue bad je file or with program related error or value issue or so
After iwould restart the sim with the start of the same flight but again with the other airplane egt not the same as which the problems started. It is also important to restart the sim to reset all.
It will be a long way but troubleshoot is what most of us do in search of smooth sim experience.

Hello, problem resolved for me

I will check Better in the next days

, but it triggered me to learn to know more of it. And although i hav

Totally no!
That’s a workaround, not a solution.