Why is the community Folder hidden away, buried under Folders upon Folders? It´s the place you are going to be installing a lot of extra stuff, so why hide it? I installed MSFS on a 2TB SSD (Maybe an overkill, but you never know.

Besides, the computer store was having a weekend sale). On this drive I can see that about 110gb is used, but when I open it up I get only 3 Folders (Program Files, WindowsApps, and WpSystem) on the first level and nothing seems to indicate that a Microsoft Flight Simulator is living here other than the drive is named “F: MSFS 2020”. Happy hunting for the community folder. I did find it after going through everything, but why make it so complicated? Oh, and after buying my drive, and trying to move MSFS to it (first via drag and drop-didn´t work, then with the windows 10 Move button-didn´t work, and finally installing the whole 110gb new the whole of last night-that did work, only now my cockpit view refuses to work…). This is going to be a long ride… But it is beautifull, even with all the dreadfull pains…

Installed to a folder I made on C called MSFS20, my community folder is C:\MSFS20\Community… I’m not sure what you mean by buried.

Ditto. I have my sim on it’s own drive and the folder in the root of that drive. Community is next level down. I also have a shortcut to it on my desktop which anyone can do regardless of its location. I recommend if you tend to add a lot of stuff to it.

This is my community Folder:

If that isn`t Buried, I don´t know what is. I told the installation Program, to install it on Drive F which I named “MFS 2020”, and that´s what came out.

My cockpit view started working again, after I added the mega livery pack to the community Folder, and testing a few planes to see if they are there. Probably has nothing to do with one another, but at least it fixed itself.

The community folder is placed where you specify

It seems possible that you didn’t specify a folder during installation and the system generate one. However that does seem an odd path. I assume that the long set of number is your user name on your computer

OK reading your post again you say you did set a path. Did you get your version of MSFS 2020 from Microsoft Market or Steam?

Thats what I also did, because my community folder location (see post above) is one that no one can remember.

I considerd getting it on Steam because that is where most of my software is from, but after thinking awhile I decided the best place is to get it on the Microsoft Store because Microsoft made it. With X-Plane, the Steam version was allways a bit behind my version that I got directly from Laminar Research. In the end the shortcut on the Desktop, loads it from whereever you got it from.

And your user name on the computer is?

Well that path is very off since it refers to AppData which is a user folder but has the odd numerics.

I have no idea what WpSystem is but Googling it seems to suggest it is some type of hidden temporary folder. I wish I could help more but it is not a normal installation

Nope, that’s on my MSFS 2020 drive as well, it’s where all the default ASSobo aircraft settings go, as well as flightplans - I think it;s when the updates are being put on perhaps??: 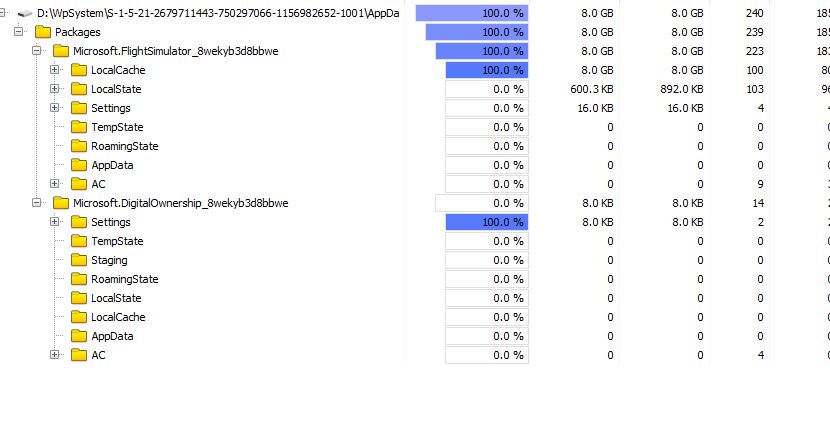 I may install it again, letting it run over night. Maybe there was something left over from my attempts at moving the Simulator over to the new drive. Do a clean disinstall, format the new drive again, and the do a clean new Install.

OK then it is in an area which I have no experience. Sorry

I also have MSFS 2020 related stuff in a Windows App folder on the same drive … Mine is a UK MS Store install of the Premium version.

My drive just has the 3 Folders I mentioned way above. I bought the Premium Deluxe. 2020 you´r not going anywhere on holidays, so why not get the maximum.

If only the download times weren´t so long, so you could quickly check what´s going on.

Try a search for:

There should only be one, in (if you got it from the Microsoft Store/Xbox)

And the community folder should be

Too late. Thanks anyway. I took the Route of a new clean Install. I think I know what I did wrong (not sure if it is wrong). At the beginning of the Install, you can set the Location of the Packages. This is my drive F, named “MSFS 2020”. Then there are parts, which I unknowingly left on C: that I thought would also go on F:. If you hit browse, you can determin where these go. Bit misleading. Now I made a folder on my drive F: named Microsoft Flightsimulator 2020. This is where all the other Junk will be stored (whatever that is). This should bring all the Contents now over to my drive F:, so that absolutely nothing is anywhere else. A bit confusing for an Install program. They should just let you set a location for the Simulator, and then put EVERYTHING there, and not bits an pieces in other locations. Will see tomorrow if it worked. Should load all night. I only have a 30 M/bit internet connection. That brings Me to 3 installs of 110gb