as mentioned, it is since 1.12.13.0 and affected are some users only.
I’am pretty sure devs are aware of this and so possible with next update…

Hey there, there are so many possible reasons for CTD. In most cases it has to do with the combination of operating system version, graphic card software version and MSFS. In the different posts you can look up what people are doing to heal that pain. First ist a clean install of MSFS is one thing. A step back in the NVIDIA driver to the version before the update. Typically NVIDIA is delivering a new driver short after or even parallel to MSFS. As there is no way to go back to an older version of MSFS - as far as I know - start with an older graphic card driver. If it hasn’t changed, go back one version and try. If it doesn’t work, uninstall the latest functional windows update 1905 2004 20H2.
That’s what I have done - and others too - to get rid of CDTs. Good luck Guido

Hey there, there are so many possible reasons for CTD.

What can be excluded? I don’t see any reason to exclude anything, neither win nor NVIDIA or graphic card generally speaking…

I am also getting these CTD errors usually in the middle of a flight after about half an hour of flying. I didnt used to get them a few weeks ago. Now getting them rpactially every flight. Making the game unplayable.

Had constant CTD with the most recent nv drivers, revert back to 457.51… no more issue

any one had better perf using another version

Oh wow. That’s a really great observation! I’ve been experiencing CTDs as well and just went through a complete windows refresh, MSFS reinstall, and driver reinstall to no avail. After reading your observation I re-ran the flight and caught the system committing 31.9GB of RAM on my system with only 32GB of RAM. That’s insane! I don’t know if this is a memory leak or someone forgot to turn off a debug feature, but wow. I’m going to try increasing my swap to 32GB on my NVMe drive and if that does it I’ll throw in another 32GB of ram for good measure. Thanks! 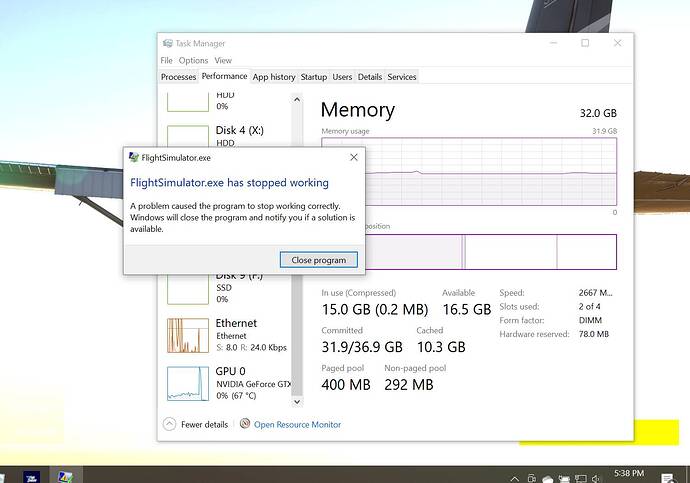 Hi, no, that’s not necessarily an issue at all. Processes can commit (reserve) more virtual memory than your RAM size, but since there was still 16+GB of RAM available, Windows wouldn’t need to use the swap file. So I doubt that this was the cause of the CTD in your case.
Did you check in event viewer if there was some indication of the cause ?

EDIT: Found a solution, as weird as it seems disabling vsync and forcing a maximum frame of 30FPS solved my CTD. This was the thread I followed to resolve my issue. Thanks everyone for your help!

That is followed by an informational event

forcing a maximum frame of 30FPS

you limit in this case manually your system-load, thus possible points more to system issue. But good that these workaround works for you.

Increasment of pagefile should only necessary for users with 16Gig RAM ( less 32Gig ). Otherwise the “system managed” setting should be okay.

A hint about commited/used memory: you can just use the “Resource Monitor”. 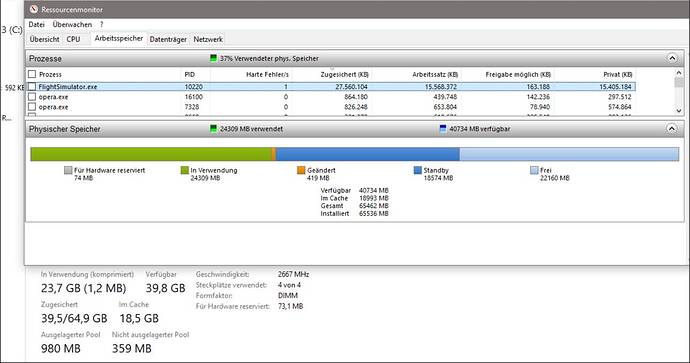 you limit in this case manually your system-load, thus possible points more to system issue. But good that these workaround works for you.

That possibility occurred to me since the frame rate limiting most likely prevents me from hitting the full duty cycle on one or more components, however, the odd thing is that it only started with MSFS after 1.12.13.0. Cyberpunk 2077, Sea of Thieves, and other games seem to run fine, I suppose those are all less demanding. I’ve never had a CTD until sometime after December, and I’ve been using the simulator since day one at midnight Kiribati time. I’ve been busy with work and family since mid-November so I haven’t had a chance to pick up the sim until this week when everything seemed to go to hell.

I’ve run benchmarks using Kombustor (GPU), a program to benchmark memory bandwidth, prime95 for CPU, and one stress GPU memory to test for memory errors. And I was able to run all of those benchmarks combined for a few hours while pulling 690W through my UPS without issue at 100% TDP for CPU and GPU. Perhaps MSFS uses some hardware feature that isn’t used by those benchmarks? I’m not sure if my hardware has suffered a failure that has made it unstable only under MSFS or if some bug was introduced that causing a race condition in MSFS that is avoided by restricting frame rates to 30FPS. I’m not sure how frame rate limiting is implemented but whenever I’ve had to implement rate-limiting in load test clients I’ve typically just introduced a delay between requests/queries. Not being a hardware or Windows guy I would imagine there’s probably something similar to my naive approach of introducing a delay done by the video driver in-between frames to try and attain that rate.

Increasment of pagefile should only necessary for users with 16Gig RAM ( less 32Gig ). Otherwise the “system managed” setting should be okay.

Thanks, that makes sense. I’m a complete windows noob and just jumped the gun when I saw it. I think I spent 16 hours scouring forums and experimenting until I found this thread, that was exhausting.

A hint about commited/used memory: you can just use the “Resource Monitor”.

Thanks, that’s a great tip, I’ll keep that in mind going forward!

this is best issue situation we can have

… we have a fomer working reference.

I read a lot posts where users report that other games works fine, just MSFS not. Why in your case now these limit is necessary, I don’t know

Most benchmarks which test “all components together” , like futuremark, does’nt use these amount of memory. Possible this have something todo with it, which might explain why users with 16gig RAM run since 1.12…13 more into issues.

Or it is a completly different thing… example: a user reported that after he uninstalled MSI-Afterburner it’s CTD with logs like “VCRUNTIME140.dll” are gone. Possible is also that the simconnect issue is bigger than expected.

I would say… if your workaround works fine, then use it and try ‘full-speed’ again with the next msfs update

I have this same after this patch.
Early all was fine

Yeah I’m quite happy that I have a solution but I’m also quite puzzled. Hopefully things only get better with the upcoming patches.

I just noticed while in the sim that I’m getting buttery smooth 30fps at ultra over downtown LA in a c172 with live traffic enabled and multiplayer off. I used to run into sub-20 fps in this area back in November. I also tested New York flying an A320 with similar results. In both cases my i9 10900KF is running at ~25% on average and none of the cores are above 80%. My GPU also reports <20% utilization in task manager.

I’m not sure if Asobo has made some performance improvements, limiting my GPU has caused an error in measurement, or there’s some race condition that causes unnecessarily high utilization, perhaps as a result of some process spinning on a lock waiting for it’s turn.

dont forget that different airplanes cause different load and fps ( there are huge diffs possible , I havent found the existing thread quickly ).

About the taskmanager and GPU you can check this

Hi, because I answered these question now some time within the issues category, I would like give a hint about questions like : " Why is my GPU usage only 5…15…25… % " " Why use MSFS the wrong GPU " " Why … " The answer: your GPU usage is much higher. The users just use the Taskmanager to check the GPU load. But the Taskmanager use normaly only the “3D” Graphics engine to show the GPU load. You can simple select another GPU graphics engine and you see your real GPU load. Optional you can …

Thanks, that’s really useful to know that the task manager doesn’t display all pertinent GPU metrics all at once, and you may have to change the displayed metrics.

After throttling my GPU to 30FPS via the Nvidia control panel, everything was fine until I tried landing in LAX with the Bonanza. It turns out some combination of airports and planes were still causing crashes. I also noticed that I was getting video artifacts (static) when waking the computer from sleep that required disconnecting/reconnecting my HDMI cable to fix. It looks like my GTX1080 may have failed.

I took the plunge and bought an RTX3080, and now everything is running fine without the FPS limited to 30, even in situations that previously caused CTDs.

I just wanted to thank you and everyone else that helped me along the way. And it seems that in my case, the CTDs were ultimately caused by bad hardware (GPU).

After CTD on each and every flight and few research, i have added the following to FSUIPC ini file in General
ProvideAIdata=No

just in case some of you find this usefull…

Swell, only 74 easy steps. I sure am glad I paid over a hundred bucks so I could run down this list for the next seventeen hours. I cant even use this thing. Im getting a CTD every time, now. Back to that other sim. That’s disappointing. Saturday morning, planned to make a good flight. Right after touchdown at my destination: CTD. Lost my recorded flight info for FSEconomy,

Are you aware of the Bing Data problem?
If not turn off Bing Data and it should be good.
There is an issue with the stream from Bing that started in the last day or so.
Seems to affect flights to, from, and in Europe, or areas nearby the most.
Bing are apparently aware and working on it.

I understand that nowadays having to go through a long painful list may not be pleasant.
I have been simming for 25 years so for me is business as usual.
Everybody is free to make their own choices, however I am sure you will benefit from following at least some basic principles.