I also think that server issues or changes are causing it (as nothing changed on our Sim clients). However, a client crash never “is” a server issue. A client should be able to survive missing, delayed or corrupt server data without crashing. So, somewhere there definitely is a piece of code in the Sim (client) that needs some attention and maybe it’s not even located anywhere near the network functionality

Debugging issues you (as a developer) cannot reliably reproduce is a mess and I think they just need some time to figure it out.

All of the flights were performed WITHOUT MSFS MULTIPLAYER, WITHOUT AI TRAFFIC, and WITH LIVE WEATHER (“Live” option on the top right menu of the map screen)

First one happened when flying on IVAO, from LXGB to LEMD, with Fenix A320. It crashed just after the BLN VOR. 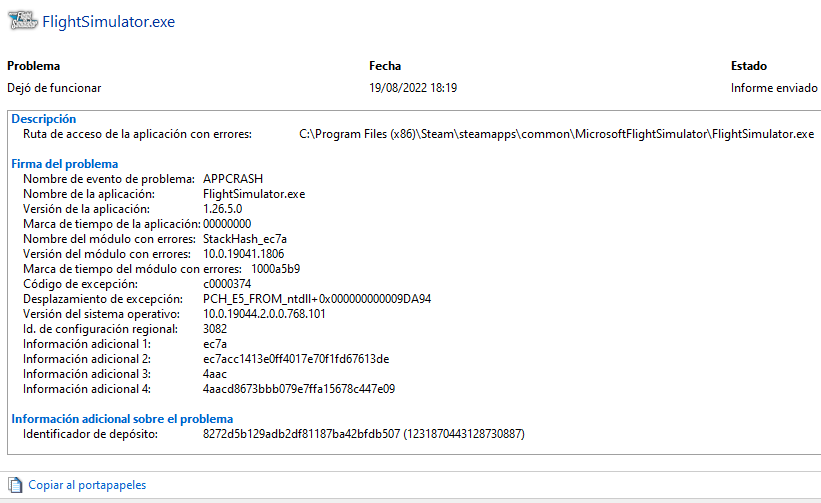 imagen821×503 21.1 KB
(be aware that “Desplazamiento de excepción” (exception displacement) points to ntdll in this log, in the other log on the event monitor shows more clear that ntdll.dll is the faulting module)

Angry with the first CTD because I was specting to have ATC on arrival, I restarted the PC to be sure that everything was fresh and… Again, another CTD, this time with this error message
(both CTD related with ntdll.dll) 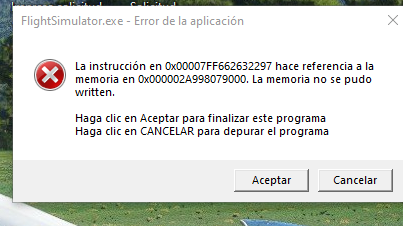 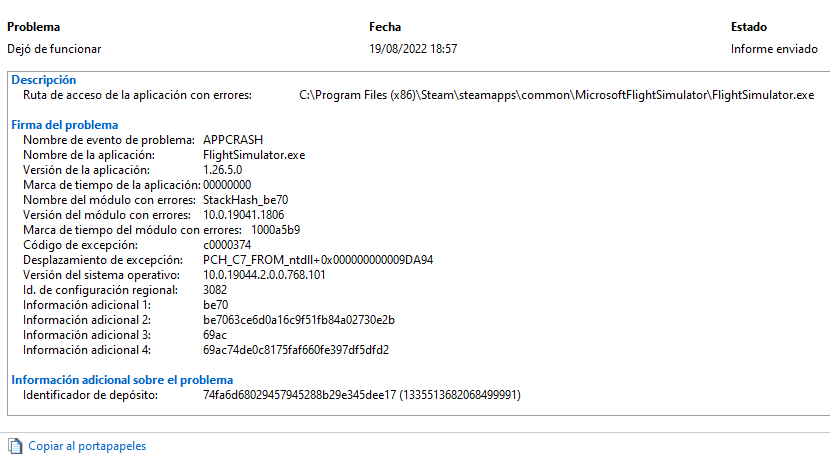 After that, I connected to IVAO again but this time with the F/A-18 “Super Warrior” mod at LETO. I did an interception because an emergency of another aircraft on IVAO, everything was fine.

On Sunday, I tried again the flight with the Fenix A320, from LXGB to LEMD and… another crash. this time just backtracking runway 9. 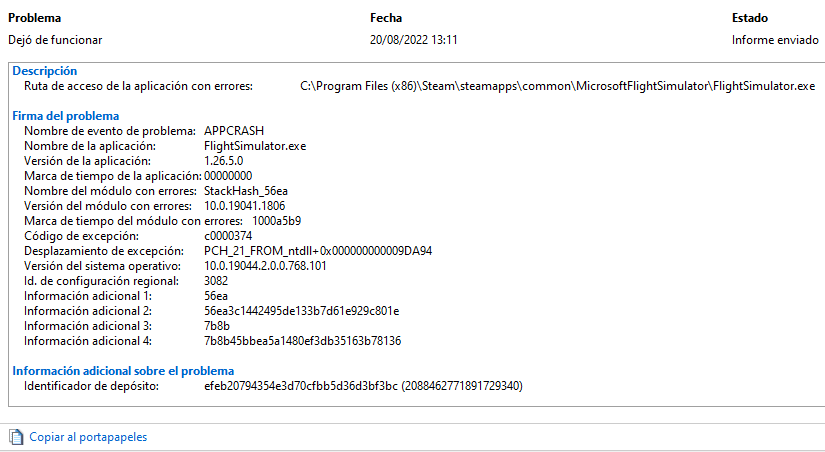 I was very suspicious at this point, I was thinking that maybe Fenix A320 or a IVAO where related to the problem. Or maybe is a problem of my windows, so I did a “sfc /scannow” on windows shell as admin. It said that he found some problems and have fixed it.
I had to restart the PC again because when I restarted MSFS I can hear some “buggy clipping sound” on the music
So tried again the same A320 flight but not on IVAO aaaand… another crash. But this time not ntdll.dll 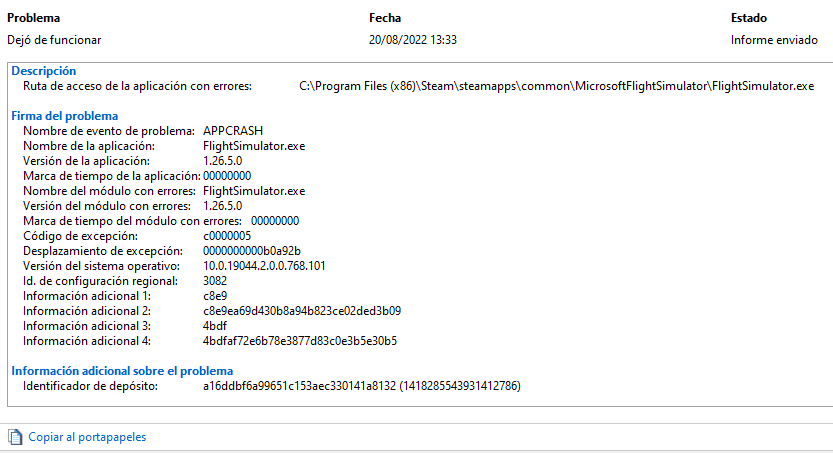 After that, I was thinking that maybe is a Fenix A320 problem, so again, I did the exact same flight but with the Salty 747. This time no CTD.
AHÁ! SO MAYBE IT’S THE FENIX.
Well… i did the flight again with the Fenix A320 to have a double check and… nothing. Not CTD.

After that I only did “silly things” flying near LEBG with random GA aircraft, no CTDs. But I didn’t played a lot with the sim because I’m afraid of more CTDs…

EDIT to point something: Be aware that the memory error says “WRITTEN”, not “READ”. I point this because there is another bug about “Memory could not READ”

100% agree with this. The client should not fail on receipt of bad data or in the absence of it. I’ve lost connectivity to the servers in the past with no issue at all. The sim simply notifies you that the connection has been lost.

Whatever this is, the client code did not know how to handle it, and should absolutely be patched regardless of whether the triggering server issue is resolved.

I’m happy to report that I’ve completed 3 flights now, including one with GSX running, with no issues. All flights done on SE Asia server.

To be fair, do we know any other games that stream the entire world to your desktop PC and then build a 3D environment from it? unlikely.

Its new ground and technically a masterpiece of achievement, way above anything.

Its frustrating but I’m sure it not something that is as easy as we like to think it is.

Just completed a flight with no CTD this time.

Real World Air Traffic - OFF
Multiplayer - OFF (Always off anyway)
Online Functionality - ON
Bing Data World Graphics - ON
Photogrammetry - ON
Live Weather - OFF (could this be the problem?)

100% agree with this. The client should not fail on receipt of bad data or in the absence of it. I’ve lost connectivity to the servers in the past with no issue at all. The sim simply notifies you that the connection has been lost

Exactly. That´s the real reason of this issue (the corrupted data). This does not happen for instance when you teleport aircraft. During the first seconds after teleporting the whole scene is flat, with no terrain, no textures and no objects. This is exactly what we see in post #295. However after teleport the sim does not crash because all received data is consistent and connection is also still alive. Client just needs some time to render all the received data.

On the other hand when you try to load a local faulty airport addon (for instance containing missing textures deleted on purpose for the test or simply containing faulty textures or definitions by design) the sim crashes instantly. When you try to render corrupted data received from the server the client crashes as well. To me the issue is quite clear.

You can do teleport tests with Plan-G tool. It allows you to quickly teleport on map click to any location. The teleport test is an easy way to force the data stream that happens while you are flying normally on a long haul or when you spawn at a new airport in a new flight (the progress bar screen just hides all that process).

With a project this ambitious in complexity and scale, they really do need much better error capture and analysis, and… and error checking to avoid data corruption. And to your point, if the sim depends highly on online connectivity, which is always going to be variable, then it needs much better fallback behaviour and clear accurate messaging to the user.

I think the programmers are just putting out one fire after another - they need a parallel team to build in error capture and handling, IMO.

You know it was reported that the sun was having unusual strong activity and we were due to be hit by the magnetic storm as a result, and that was for Sat. And Sunday…coincidence???

Haha I didn’t realise they modelled the weather realistically to that degree. But yeah it could be the reason. It’s another bizarre coincidence

And your point is? People should buy and invest on something that doesn’t work currently but may or may not work in the future?

Definitely not fixed
One flight went through, second CTD. Pure gambling, like the last few days

And your point is? People should buy and invest on something that doesn’t work currently but may or may not work in the future?

Its pretty obvious this is not a finished product, otherwise we wouldn’t be getting sim updates throughout its lifecycle.

This is just not an accurate way to look at games in 2022. Most games these days are running a live service model. This sim is no different.
Sure, you can argue and be right that it got released to fast, but the sim has well matured past that point. This issue just crept up over the weekend, and has been stable for months for countless people.

You are getting off track.

That discussion won’t help to solve the ctds

But, some moderator posted here that we should focus on ntdll error.

Well, it seems for some people it doesn’t result in an ntdll error. They may have nothing at all in the log or the common Msfs exe.

You also mentioned that we should let out slowdowns etc.
I can understand that very well, since the forum was full with these kinds of topics already before Friday and you don’t want to have old stuff mixed up here.

But i don’t know… There may be some relation.

Just an example, since Friday i did 7 flights now and one of them crashed (the last CTD was many months back and I fly every day, nearly). Now, it can be coincidence of course.

But the flight directly after that had very weird behavior, the same as some people mentioned here. Being mainthread suddenly getting hammered and having weird slowdowns.
At FL 350.

I’ve experienced that a few times before but also months back.

I dont know, having a CTD for the first time in months and that weird slowdown too, is also a coincidence that could be more than a coincidence.
Maybe there is really something with getting lots of traffic for the maps etc resulting in corrupt data received or something.

I feel with you, this isn’t an easy one to troubleshoot…

Hopefully the people who cannot fly atm will be able to do so soon again.

Any UK simmers that have tried a flight more than 2 hours today BST time let me know please the results. Thanks.

Also mention if you have defender on or off i wanna try that next.

Agree that this is the direction games will be taking due to the vast resources they can pull from data centre’s but any software that utilises this should be resolute enough to not capitulate so immediately and without warning when there is an error server side. Also I’m not sure the ‘it’s working for countless people’ is much help for those that have had these issues for many months, and they do exist. Survivors bias.

I have done 3 flights in the last few hours.All with PMDG 737-700.A one hour.Followed by a 3 hour followed by another one hour.All options ticked.I’m currently half way into a 5 hour sector.

All running as it should in my mid range system.

Sorry.Forgot to say I have Defender on

Hello everyone. I had a CTD yesterday on a flight from Split LDSP to LFKF Figari and on two more flights. for test purposes I flew this flight route again and then ctd with ntdll.dll.

Then the same route again with deactivated live weather. and I suddenly didn’t have a ctd anymore. OK. 2 more flights made without live weather and again no CTD.
OK. now to say the least, I think I was able to isolate the problem. the live weather probably has a problem.
Only for note live traffic I do not use anyway because I had many crashes in the past.
I hope I could help you. Of course, I continue to test.

Sry because of maybe bad English I used a translator.

Based in Scotland, currently into a flight just over 1hr. Have live weather and traffic off, and also multi-player off. Using REX to inject live weather.
Have noticed an FPS drop though, even at cruise.