I took this picture today, I think it tells me i’m CPU limited but unsure about frame times etc or if there is anything I can do to gain any performance here? 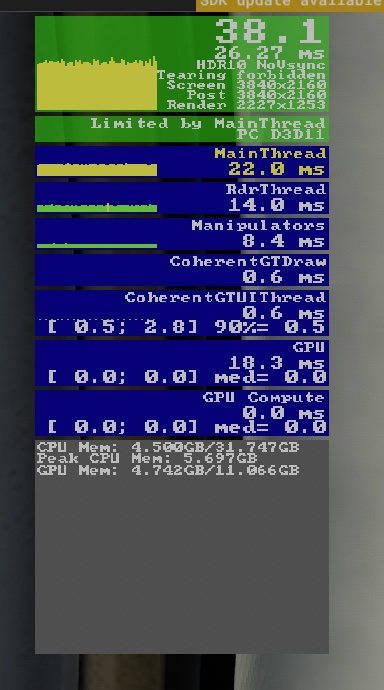 If that’s on the ground or below 500ft agl it’s fine and will improve as you gain height.
Things seem to change after every update but lately I’ve been tuning at 1000ft matching gpu and mainthread render times above a PG city. Every PC is different but for me this still behaves itself on the ground albeit with a reduction in fps. I don’t usually play at 4k but when tested even as low as 20fps was still smooth.

Yup then it looks good to me … enjoy

A couple of sim updates ago this would have been guaranteed stutters and is a good example why we should all recalibrate after every SU.

Am I correct - (just thinking out loud)

As it is CPU limited, there is zero improvement to be had by changing the GPU?

As the CPU restriction was bought on by my adding two USB-HDMI touch-screens, would it be better or worse (or even possible) to add another (smaller) GPU and move the touch-screens to that instead?

Not exactly, as there is always things you can do to help lower cpu frame times e.g. lowering LOD will have an exponential effect, the better the gpu the more extra fps you will get. It would be the same for cpu/ram overclocks in that a weak gpu would see less benefit.

As the CPU restriction was bought on by my adding two USB-HDMI touch-screens, would it be better or worse (or even possible) to add another (smaller) GPU and move the touch-screens to that instead?

If you’re bottlenecked at the CPU, adding a second GPU isn’t going to do anything other than burn a hole in your wallet and electricity bill. Most of your bottleneck is likely held up in the triple monitors since it’s trying to render 3 times as much (and in 2k no less). If you brought that down a level each (1080p/2k/1080p), tweak TLOD and some other settings, you’ll for sure grab a few extra frames.

Of course, got that. Its actually rendering 2K-4K-2K

and its perfectly flyable, borderline but flyable certainly. Adding the two touch screens dropped the FPS by about 15 and pushed it from firmly GPU limited to CPU limited.

I did try dropping the main screen to 2k and once you’ve had 4K, 2K is just plain rough, it did boost FPS by about 10 frames though. I’m running TLOD & OLOD at 110ea and its all happy, works hard though.

I would think DX12 should work better with your pop outs

Even though they run on the CPU not the GPU?

Last time I tested popping to another screen had much less of a penalty under DX12 resulting in better framerates overall … Only you can test your system.

Turning off HDR should get you improved fps…

Your cpu and gpu memory usage is very low

I normally get around 11 gig cpu usage, and around 8 to 9 gig vram usage

Interesting, this is on the ground in the CJ4 WTmod at Stansted with custom scenery add-on. I believe TLOD & OLOD were both set to 110

I’ll take a photo tonight.
When I get home

Mind you, I have all my sliders all the way up.
Apart from terrain.
I have that set at 300

Nice, I can’t get anywhere near that with three screens & two extras

Last time I tested popping to another screen had much less of a penalty under DX12 resulting in better framerates overall … Only you can test your system.