It’s not the add-ons, or not only those. I don’t have any third-party add-ons whatsoever yet I have a CTD every time I play. It’s practically unusable, no matter if you use add-ons or not.

The add ons are definitely causing most of the issues here.

We all run the same hardware, either the add ons are bugged or memory is leaking causing the CTD.

If I and many others remove all 3rd party content no CTDs occur.

Is your install not corrupt? Have you tried a full reinstall?

I have done this, just uninstall one by one and worked out which are causing CTds, I no longer get them. Annoying I have purchases I can’t use but until Microsoft allow developers to test properly they will be staying uninstalled

which dlc’s have you found that causes issues?

I’ve gone over all the general advice we have in such cases. Including a full reinstall. No matter the settings, the add-ons, the “console power cycles”, the sim just crashes every single time. I can’t fly for more than an hour, most CTDs occur around 60-75 minutes. If the sim stays intact after this time then the crash is guaranteed during descent, approach or landing.

It must be something you are doing / configured because we would all have the same issues if you have no DLC. When I take all DLC off I have no CTD issues…

Could you make a new gamertag with an alternate email address and try using the sim “fresh” to see if there is something within your save data that is corrupt?

This is not something that can be tested this way. What do I do? Create a new account and start flying endlessly? What if it works the first few times but CTDs in others? How many hours should I spend testing? This is something Asobo should do. The sim is not stable enough, they said it themselves. I simply have no time to test alternate accounts. Even if we assume there’s something with my save data (what could be that, though?), I would not start a new account for this.

Hey, I was just trying to help you.

I know it sucks, mega.

If you felt compelled to spend time looking for a solution or an answer, I was thinking it could help.

I wholeheartedly agree that Asobo needs to manage this, but if you’ve read anything on this forum, it doesn’t seem there is a pattern of rapid deployment of fixes.

If your save is at fault, which it probably isn’t. You just delete it and start fresh. There are functions for that within the Xbox OS.

I know and I wasn’t lashing out at you. Sorry if it felt that way. I just simply have no capacity to start testing on a new account. It’s quite unacceptable that we all have to play beta testers. It’s not only a negative experience but others spend their money on DLC as well. Well I did too, I bought the Premium Deluxe Edition. And it just doesn’t work as it should.

If there were any other console games that crashed every other time we try to play, there would be an uprising. I’m not sure how much longer Asobo and MS can sweep this under the rug.

It is totally disheartening and feels crazy hopeless when you read this forum and see threads about a myriad of issues that have existed as far back as launch.

As I review and mentally tally these things, I feel discouraged by the entire process. I find bugs/issues and don’t even want to bother posting them here or on Zendesk any longer, because I don’t believe they will be heard/addressed. Why? Because the evidence that that will be the case is all right here on this forum.

This upcoming bug fix focused SU8 really needs to come good on its promises. Of course, every single user of this sim has a different set of must fix issues, so it will be quite interesting to see what actually will be addressed and what will fall by the wayside.

It’s all good on the personal front, thanks for the apology. I feel quite bummed for you (empathy is one of my strong suits), because, in spite of the issues, I’m totally smitten by the sim and am able to spend significant hours flying. Yes, I absolutely run into issues nearly every time (mostly dumb small stuff that totally rankle), but when it all comes together it is just awesome.

Here’s an update from me:

Ever since the sim was released on Xbox, I’ve been struggling with CTDs all the time. Now, because of the widespread issues with Live Weather in the past days, I turned it off. It turns out that live weather was the culprit, at least in my case, all along!

Look at the attached image, I stitched two screenshots of my logbook together. The green line indicates the point when I turned live weather off. Look at the flight times above it! No CTD whatsoever, and I threw everything at it: the 787-10 with its glass cockpit, handmade (not third-party) airports, bad weather, everything. Not a single crash since.

All the “Vicinity” and 0 flight times you see below the line are the CTDs I got. When I didn’t get a crash before was only by luck and short flights. Turning off live weather is not as fun, but it enables me to finally fly wherever and however long I want, without the fear of CTD. Now I’m reluctant to turn it back on, even though the issue of the past days has been resolved, because it caused my sim to crash all this time. I’ll keep testing, and enjoying the flights in the meantime. 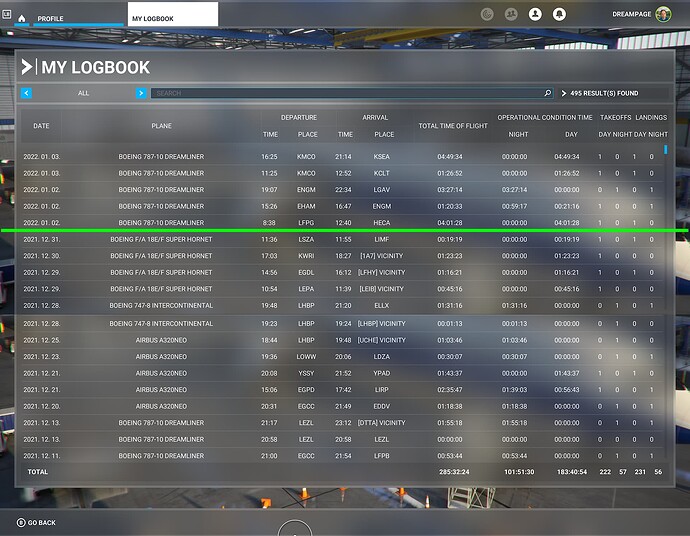 Well at least that explains why you were getting the CTDs. Just a shame the DLC issue is going to take a lot longer to resolve….

I am testing “long term” without LW too as I’m having those CDT often. I hope MS does something because LW is great.

AI traffic on. Live Weather off. And Last two days CTD on final approach every time, at any airport. Arggh… what’s happening? Asobo stop celebrating! give us back a working version.

Update .18 is live today, looks like no fix for CTD for those that were in beta.

I have the same problem at LSZH. However, I do have the third-party LSZH from the XBox Marketplace. Not sure if that is valid. I haven’t tried uninstalling the airport because I have been flying elsewhere in the meantime.

I am looking forward to the update today. I was getting CTD (XsX) with the Live Weather issue, which was temporarily fixed with using pre-set weather. since the Live Weather fix earlier this week it has been fine.

I do wish, though, that the logbook did not record “zero hours flights” when the flight ends but you have do not end flight on engine shutdown turned ON in the options.