I’m returning to simming after many, many years and have only ever dabbled in scenery before.

I’m hoping to “improve” my local field. My ambitions are not huge at present. Just to use some stock objects to replace existing hangars etc to make the ambience rather closer to reality than the stock airport. And to put up some fencing.

So, my question is: is there any way to merge fence pieces to form a continuous fence? At the moment I am just placing pieces of Fencing_Grilling02_Middle side by side. Which means that every fourth fencepost is doubled up and usually they overlap slightly or there is a gap. And corners look a mess because of the slanted anti-climb barbed wire at the top.

Apart from being tedious, which I can live with, the end result isn’t very good. Am I missing something? Is there another way? Also, are there corner pieces or gates somewhere?

Thanks for any help.

I’m not this deep in the SDK or my airport project yet, but have you tried doing a boundary fence? (I think I saw it in the airport section somewhere?) If it’s anything like FSX it should be rather easy to draw a fence around your airport.

I am only starting to learn the SDK, myself, so I don’t know what I’m talking about right now.
But there is a Wishlist topic for fences, so it doesn’t sound like there’s a good way to do it. But I will happily stand corrected. In the meantime, you may wish to vote for this:

Add a fencing tool to the Scenery Editor Wishlist

Right now, the only way to place fences in the Scenery editor is to manually place them as objects, which is extremely tedious and doesn’t look very nice. It would be really nice if there was a tool for placing fences by selecting the path you want it created on, similar to how light rows work.

Thanks, both. I’ve voted on the wishlist, but fencing is obviously a minority interest!

I saw back in June they spoke of a new fencing tool for the SDK.

I assume it’s not added yet?

2 functions that were great in Wededitor for xp11 was facades and strings.

Strings: allowed you to place repeating objects. Perfect for trees and fences.

Facades: sort of like autogen building creation. You trace the perimeter of where the building is, set the height and the type of building

I’m working in a airfield at the moment and am holding out building a fence cause it’s teadious low value vs effort return.

Right now, no, I, too, have to place all my fence pieces individually.
They’ve said it’s on the list for development, but, no date yet on delivery.

You can ‘build up’ fence-lines, using duplication, which is a slow way to start but good once you get going. Just place a fence object, duplicate and align it, then select both and repeat, until you have a good long line. You can select the whole line and rotate it as one, so you can cover large areas at any angle quite quickly.
However, yeah, I miss Whisplacer, which would take a start/end point and build a fence-line, but the same tool could also create evenly-spaced objects at a specific angle to the line, such as street lights, or randomly-spaced/random rotation objects on a line such as trees.

Great tip on the duplication. I could start with a few fences and then group select and duplicate to make it faster to place. thank you.

You guys gave me an idea, “Easy” automatic fences in Blender using Gis 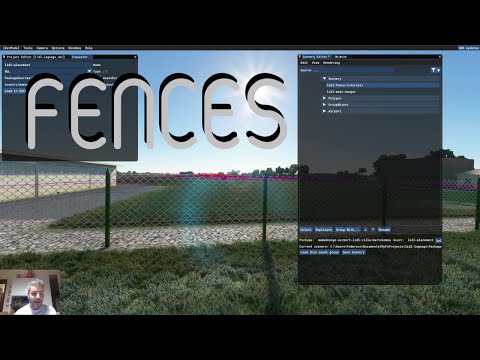 And didn’t know about that wishplacer, i can create a Little utility to Place every object in a row or fill a polygon, i have already the code to do that