CTD in the same spot every time

I crash in the same spot every time.

Fly from anywhere or just start at CNP7 taking off and flying east down river(the St Lawrence). When you get about 4 miles downstream you’ll crash. There’s a spot on the north side of the river where sand is piled high in real life. Looks like a sandy square on the edge of the land into the water. And it’s right around there(just past it). Normally happens around there or just in front of the creek right after the sand area. Here’s a view of the sat map to see where you’re looking for. 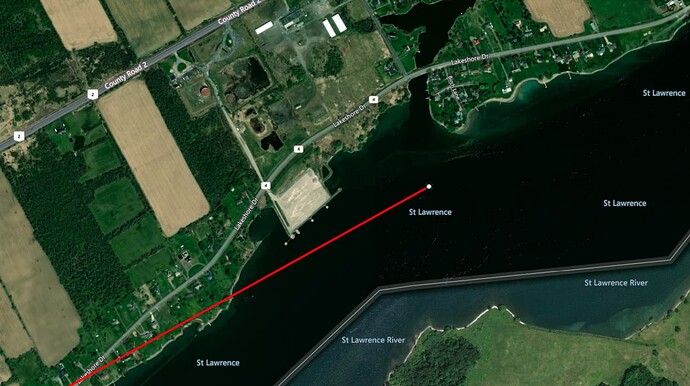 I’m about 200 to 400 feet above the water on average but it happens every time. Took everything out of my community folder to test it. Tried flying from a different airport to start.

Used the C152 although I previously used a different aircraft and it happened as well. Here’s a screencap of the error files. 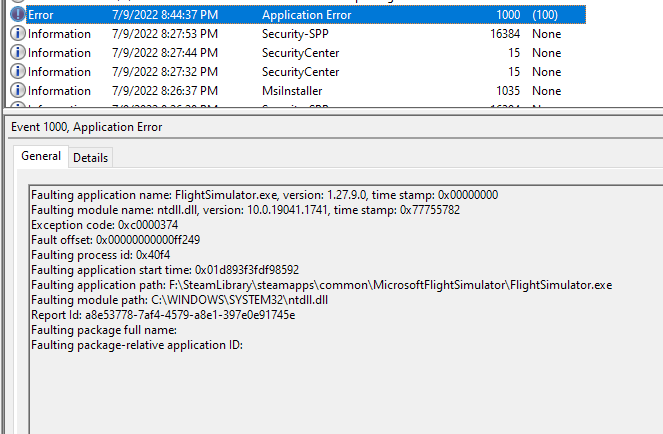 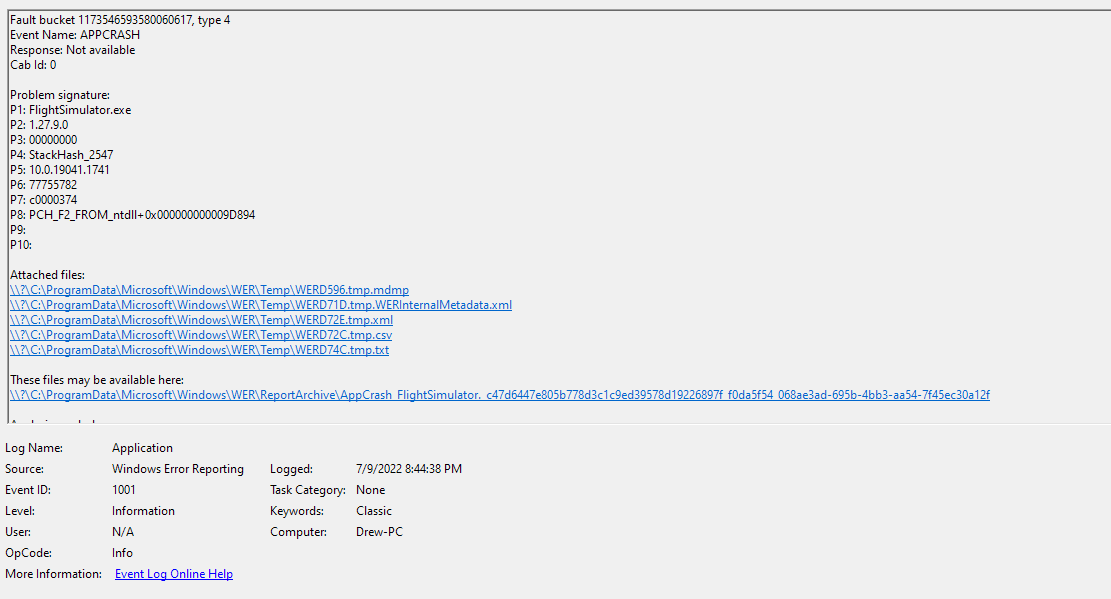 Just curious if anyone can also reproduce it and it’s not just me. Then I’ll put a Zendesk bug in and also avoid that area for now.

Hey there, @drewhosick1, and welcome back to the forums. And thanks for the details about this repeatable CTD and the Fault Bucket ID info.

Even if no one else has it, you are seeing this, so I suggest you report via Zendesk anyway. Might also be good to state if your Community folder was empty at the time.

Thanks again, and welcome back!

Actually I did say it was empty for the community folder. Not a thing in there. I’ve tried it with my stuff in there and without. Makes no difference and it’s in the same spot every time within a couple hundred feet. I’m guessing something’s trying to load in that’s causing the crash but who knows. 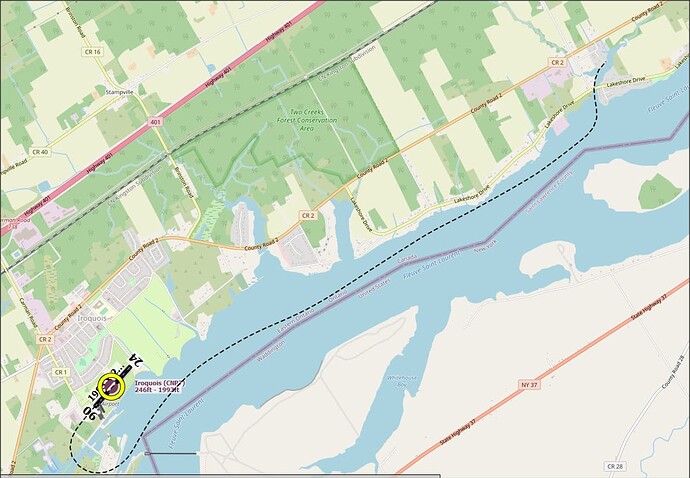 @Sartanius it seems like the second issue where the old unique “grammar.pggmod” error message for that kind of issues is no longer “unique”:

A similar crash because somewhat with the map:

Thank you using the Bug section, using templates provided will greatly help the team reproducing the issue and ease the process of fixing it. Are you using Developer Mode or made changes in it? No Brief description of the issue: Consistent CTD Flying low over mountains between PHNG and PHNL particularly at (or near) Pali Hwy peak (Nu’uanu Pali Lookout). I suspect a terrain issue, in real life there are a couple of road tunnels in the area that may be having issues rendering correct…

The former main topic for such kind of issues:

Thanks for this. The details are very valuable to the dev team.

Thanks for double checking. Thought I was going to be one of the unlucky I es with crashes all the time. Now I know it’s own spot. Should I still file it as a bug or is this all you need with so much info from the second person

If I can reproduce it, I can probably nail it down if it is a Scenery issue.

We had a similar sounding issue some 6 months ago near KADW.

By flying in towards that point, we were able to plot a circle (on LNM) with a boundary where the effect happened, and the center of that circle was the Offending Scenery item, 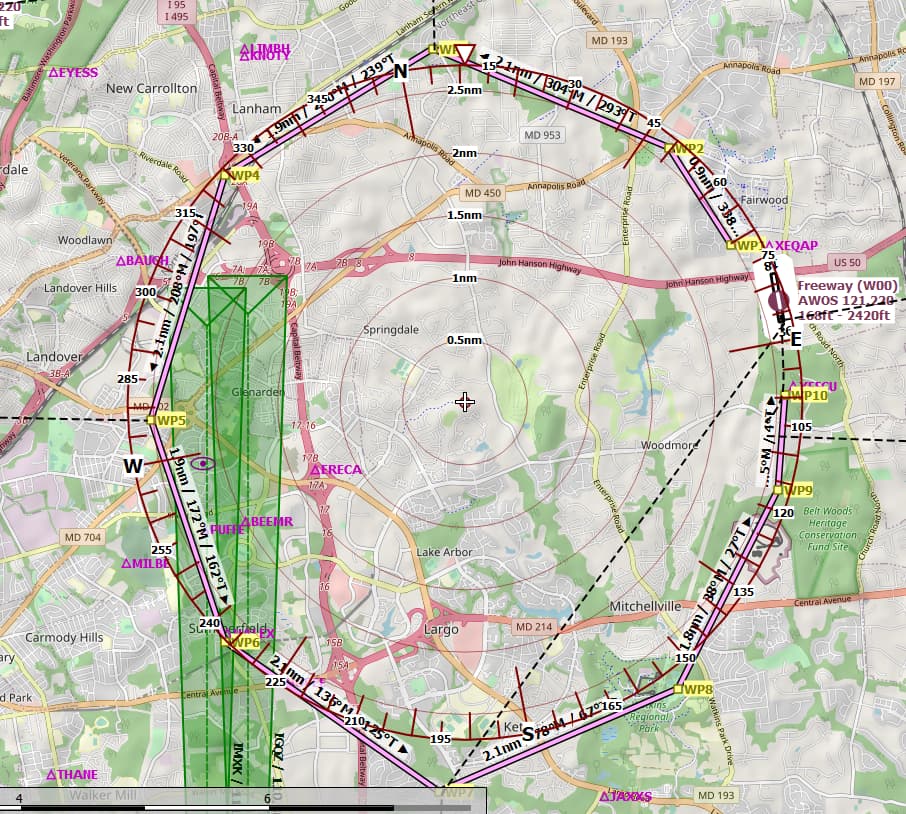 Then watching Procmon as this occurred, it was evident as to which scenery file was being read in, and confirmed by removing that file, that the issue went away.
Than all Asobo had to do was Fix that one identified file, and the problem was solved .

Should I still file it as a bug or

nail it down if it is a Scenery issue.

yep… I have same assumption, as mentioned. Our “grammar.pggmod” seems no longer unique for such kind of issues.

Than all Asobo had to do was Fix that one identified file,

… I think , I wrote that already in grammar-topic, better would be to find the generally issue within the implemention and/or add more “catch the exceptions”. It can take 100 years to find all possible issues within map data… Its better to ignore the wrong data and show e.g. a “spike” or nothing, as that the application crash

Actually, that is exactly what happened.
Asobo found the fault in the Andrews AFB area, and from that, found and fixed all similar caused faults across the whole scenery base.

ie Identify what the fault was being caused by near KADW. resulted in fixes of identically caused issue, across the whole sim.

Strangely enough, it doesn’t seem to happen if you’re at a higher altitude. I passed by at 2500 feet and no issue. Just when you’re closer to the ground. It also happened when I was going the opposite way but only lower to the ground as well.

Strangely enough, it doesn’t seem to happen if you’re at a higher altitude.

Dependent on LOD. Range / elevation – that would make sense.