Is there any way the ATC calls me differently instead of Airbus ASX320?

Yeah, you can change it by selecting one of the left tabs, while you are in the aircraft selection. I think it´s called ATC settings or anything like that.

Google for MSFS2020atcv3. You can change all airplanes at once. It creates automatically a backup of thr aircraft.cfg

can you use it to change individual air planes

Yes, you browse instaed the root path to an Airplane of your choice. (RootPath:)

You can change your tail number, and that will work on it’s own.

I noticed that if you add a callsign as well, this only gets used if you also put in a flight number as well. On it’s own, you are referred to by your tail number only.

Yes, you browse instaed the root path to an Airplane of your choice. (RootPath:)

There is a aircraft.cfg in the classic 172. Same procedure. Ok, I got your point. Looks like the aircraft.cfg is there but you can’t change. Maybe because it’s a default Aircraft for training? Try another freeware livery for this plane.
I did it in the community folder because there are all my liveries. That seems to be the difference. 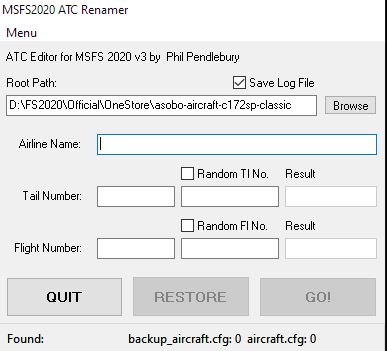