DC-6 Tutorial - How To Show The Map In The Garmin GPS Device?

I was following the tutorial PMDG_DC-6_MSFS_Tutorial_1.pdf - which is very well written, btw! - but I stumbled over how to show the map in the Garmin GPS device, as explained on page 12: 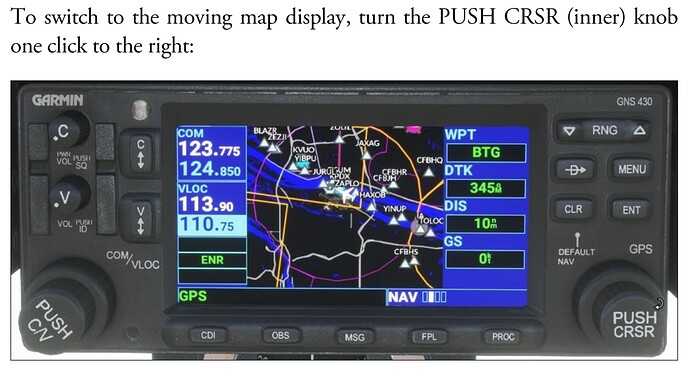 But no matter how far to the left or right I turn the mentioned “PUSH CRSR” button, and no matter which button below the screen (CDI, CBS, MSG, FPL, PROC) I pressed before (multipe times, as I do realise that, depending on the button, they do switch the “mode” (?) when pushed multiple times), I can’t get the map to show.

So is the screenshot from a development version (the tutorial is from June 2021 already) and the map did not make it into the final product? Or what am I doing wrong?

Also, I do notice in the screenshot that at the bottom right of the display there seem to be four bars (one filled), next to where it says “NAV”: those seem to indicate multiple pages, which would make sense. But in my case I only see one bar (which is filled - but no other bars), which would indicate that I am really missing the other three pages?

Doh! Never mind, it works now. So here is my own screenshot:

Whatever I did yesterday evening: it was either getting late, or i must have “misconfigured” the device, by frantically clicking on all buttons