I for one am super excited for this news!!! 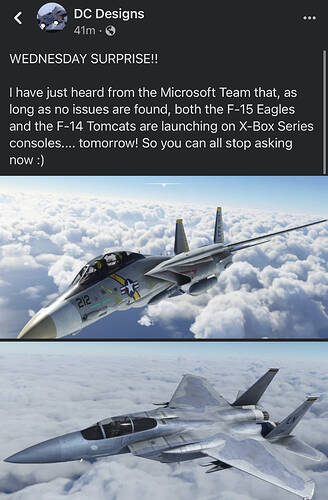 Excited for this release, the F14 will be a immediate purchase.

I purchased the F-14 for PC from JustFlight about two weeks ago. TREMENDOUS amount of fun, and challenging enough to keep you on your toes, especially the A model. Highly recommended.

Some very expensive aircraft to purchase. Would like to know if they are any good or do we have another euro fighter here.

The F-14 is said to be incredible. All the YouTube video reviews are positive. I’ll be definitely going for that one as soon as they appear in the store.

I’m logged into the game now, no new marketplace stuff yet. How is it for you? I guess within the next couple of hours maybe as a rough guess as to new things dropping?

They just showed up. Make sure you restart the game so the purchase failed bug doesn’t get you.

Did some flying with the F-15C this evening and had a ton of fun. Only thing I’m missing is the manual to understand some of the nuance and configuration. 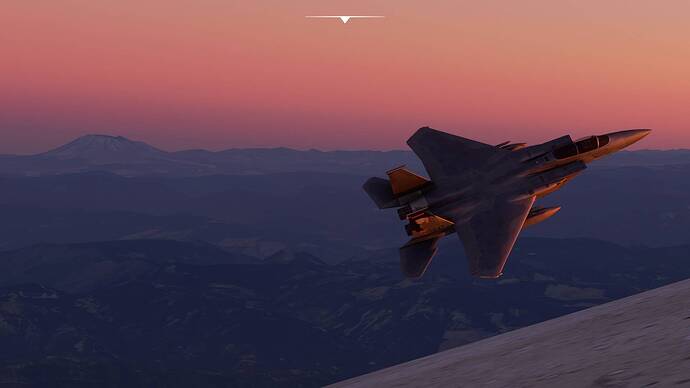 Have bought the F-14 on Xbox and will have a flight of it later today when home from work. Excited to try this as it has many positive reviews online.

The Microsoft team did not think about manuals apparently, so they’re impossible to access with Xbox purchases - I am updating the manual at the moment and will have it posted for download on the Just Flight website for folks to be able to access as soon as it’s ready

The F-14 manual can already be downloaded from the Just Flight site.

Thanks I’ll get that downloaded now.

So downloaded today. Works great and a lot of fun to fly. Still learning where everything is and what it does but it works awesome.

Is there a chart for how you can load the missile bays, meaning what exact weight values at which points or is this in the manual? Also what of the other customizations i’ve heard such as custom paints or is that only a PC thing? Is the wing sweep angle just automatic for the “A” variant or is there a way to manually adjust it? I’ve spent ages and not sure where I should be looking. The checklist does prove helpful but only to a certain degree for me.

You can download the manual from here at the bottom of the page, all the details you need are within;

Sadly there is no manual reader attached to MSFS - a big oversight in my opinion. Also, there are no weapons in the console version, Microsoft rules I’m afraid!

The weights for the payload are directly in the payload menu (PC Version Just Flight). But I am afraid, there will be no warfare payload for the marketplace version. The manual wing fold lever is directly adjecent to the throttle, you have to lift the plastic cover first. If you can use paint software on xbox, you should be able to bring your names on the plane. And a tipp for beginners - use the B Variant firts, since the A variant has modeled compressor stall, and you should know what to do to avoid them. Kind Regards, JayDee

Thanks for the help. I jumped on the Justflight store, checked the manual and finally found it. Yeah I’m on the Xbox version and really doubt about being able to do the painting after all as there’s no paint toolkit available for the Xbox that I’m aware of. I jumped straight into the A (purposely throwing myself in the danger zone, yes gotta get Kenny Loggins in there lol), managed a manual engine start, takeoff and even landed it no crashes, though I more like bounced it on the runway haha. The only issue I had was takeoff and that’s because I forgot putting flaps down till halfway down the runway but I pulled up in time.

I have a few questions about the F-14 on Xbox.

Please move the conversations to the Master Threads for these products. This avoids Duplicate Posts which is against the Code of Conduct.

DC Designs has further addressed the development of their F-14A Tomcat. Super excited for this beast, which will include the A and B models. Edit: the Tomcats have been released! … “As many of you probably know, there were three Tomcats; the A, with its temperamental engines, raw handling and famous colour schemes; the B, with the upgraded engines that allowed it to turn-and-burn with any other fighter in the skies; and the D, which was basically a B with upgraded avionics and radar. This proj…

Hi folks! Let’s talk Eagles! DC Designs has managed to create an amazing piece of work with the Strike Eagle release. I’m a huge fan of the real aircraft, so I was quick to jump in and fly around. Since version 1.0 the Eagles have been my go-to operational fighter. It sounds amazing - that start-up sequence is one of the best sounding sequences I’ve heard so far. It flies great, handles I believe like you’d expect (I’m no fighter pilot, but I’ve got an imagination). I’ve got some trouble with …