You should only see the lights of cars at night and I can’t see those. Perhaps my graphics settings are too low?

X-Plane also gets the street light piece wrong, but I imagine this could be fixed. X-Plane does a great job with car lights at night.

There is such a huge variety of street lighing in the world, even along the same highways, that you would almost have to do them all by hand to make them truely realistic. Not a realistic idea.

I realize you couldn’t make this perfect, but it could be vastly improved with an intelligent algorithm.

We can expect two world updates this year.
I think there is much to come in the future.
First let’s wipe the priority bugs out.

Of course, I’m not saying this is high priority, I’m just saying it should be on the wishlist.

I was flying around Spitzkoppe in the Namib desert (a mountainous formation) yesterday and changed the time of day to night. A dirt road out in the desert was lit up like a super highway. It ruined the night experience in this remote location, but these kind of things will be hard to AI away.

I agree that the car headlights are not bright enough too. In general, light brightness is represented a little weird in certain places. Like many light sources in the game look way brighter from further away than close up. (lights on the planes and landing lights especially.)

Still, nitpicking since everything looks so amazing and I’ve had so many “magical” moments even only in the first day.

The night lighting in remote areas is a little funny. The ground surrounding points of light is lit for an extended distance, even if there are no lights. This works in a city, but looks strange around small towns or lonely roads in, e.g., the deserts of the southwestern US.

I don’t see why it’s unrealistic. The AI just needs to know it’s in a rural area and choose a country road theme.

Bump, this issue is worse than ever. 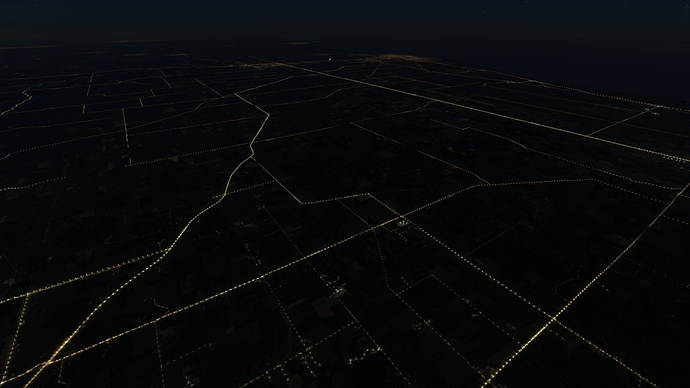 These are all rural roads, not a single one has a streetlight in real life.

There is such a huge variety of street lighing in the world, even along the same highways, that you would almost have to do them all by hand to make them truely realistic. Not a realistic idea.

You’re telling me they have Blackshark.AI to create cities but no way of figuring out if a road is in a city or not? Bing maps have to have that info.

This problem is caused by limited road information in OSM data which is used by MSFS. To create street lighting you just need to assign lighting to the different OSM street types. There are more than 10 oad types, so you can assign different lighting effects for different road types. Unfortunately the same road types can exist in urban and rural areas. In order to get around this you have to have some method of differentiating roads in rural vs urban areas. Unfortunately OSM data does not have enough information to make this distinction possible.

I did some scenery design for Aerofly FS2 using the same OSM data that MSFS uses and the only way to avoid this is to exclude rural roads manually. This is difficult even when doing small scenery areas and virtually impossible if you are designing scenery for the whole planet as MSFS does.

So lit roads in rural areas is just something you have to live with, until some bright spark comes up with a reliable method of identifying and then excluding rural roads en mass.

Interesting, thanks for this information.

What about putting a sort of reverse mask over urban areas? Areas without the mask would not get the street lights.

I’m not sure what sort of data is available, obviously, just throwing some wild ideas out there.

As far as I know OSM has no data about traffic, just road type. Any sort of mask would require the ability to easily identify an urban vs a rural area, which would be difficult to do. The closest OSM gets is suburb, you would then have to manually classify suburbs into rural or urban, then use logic to exclude street lighting from roads in rural suburbs. Problem is not all areas are desinated as suburbs or have an area you could use for this purpose.

Here is an example of OSM data for one road, Dayboro Road near home. It passes through both urban and rural areas. In reality the urban part of this road is lit, while the rural part is not. But both sections of the road have the same OSM data available, and nothing to differentiate them.

Available OSM data - the description on the left applies to the section of the road shown in orange.
Dayboro Road - Urban Area

As I mentioned you could use an area to designate roads that are not to be lit, that exist inside a designated area. In reality the section of Dayboro Road that passes through Whiteside is not lit. Using OSM data it is possible to identify roads that are located within Whiteside. But getting any automated script to make these identifications you would first need to manually classify all areas as either urban or rural, as this data is not recorded in OSM. Possible for small scenery areas but not for the whole planet. Another complication is that Dayboro Road is not fully located within the area designated by the area Whiteside, so may not be identified as a road not to be lit.

People might think Asobo have invented something new with scenery design, but there were already instructions out there how to create photo realistic scenery from Bing (or Google images), create lit streets at night using OSM road data, create houses based on either Bing images or OSM actual house sizes and populate trees into areas based on OSM data or Bing imagery. I had already done this for Aerofly FS2 which is why I recognise the same problems that I had encountered, also appear in MSFS. Like lit streets in rural areas. Asobo just do it so much better, so much quicker, live stream it, for everywhere. This is quite an achievement for even small areas, let alone for the whole planet.

And lastly OSM data is open source. So then is no guarantee of the accuracy or consistency of the data. That is why you occasionally see houses 1000s of feet tall in MSFS, because someone made a typo when creating the source OSM data. When I found this doing my own scenery design, I just updated OSM data with the correct information myself, as anyone can contribute. And therein lies the problem with OSM data.

A possible solution that could really solve this issue very fast and with great accuracy, could be a suggestion another user described here:

https://forums.flightsimulator.com/t/terrible-night-lighting-after-patch-5/310086/181 (He describes a way that could be used to filter out rural roads and secondary network infrastructure by implementing an inverted Black Marble NASA imagery filter (the same used for the sepia night filter for cities by Asobo), over the OSM vector data)

I don’t really know if it’s possible or not for Asobo to implement a filter like an inverted Black Marble NASA imagery, over their vector-road data. This could possibly solve this issue without the need of specific OSM parameters for exclusive regions.(It could certainly be done via changing road parameters in OpenStreetMap , but realistically it would take decades to correct them and categorise them correctly for large parts of the world. )

Here is an example of OSM data for one road, Dayboro Road near home. It passes through both urban and rural areas. In reality the urban part of this road is lit, while the rural part is not. But both sections of the road have the same OSM data available, and nothing to differentiate them.

same OSM data that MSFS uses and the only way to avoid this is to exclude rural roads manually. This is difficult even when doing small scenery areas and virtually impossible if you are designing scenery for the whole planet as MSFS does.

Luckily that\s wrong, this would not have to be done manually, it’s definitely doable procedurally by excluding lamps (points/polygons/vectors) based on extra datasets like the NASA Black Marble night light data, excluding lamp placement with underlaying pixel value / brightness under a certain threshold (Same data being used for the MSFS Sepia Mask global illumination)

I did a quick example of your Dayboro Road, cutting light off using the Nasa Black Marble data: 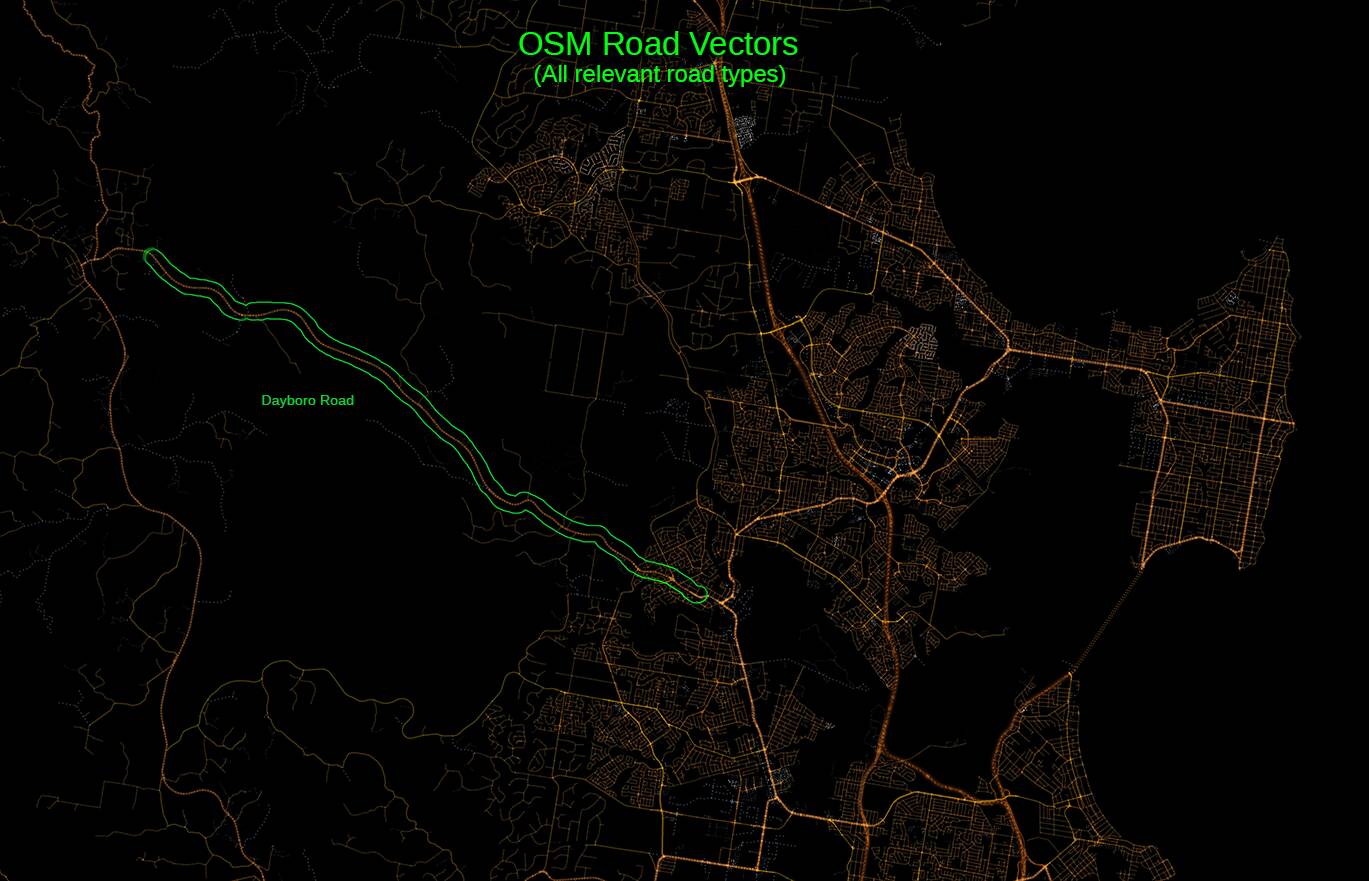 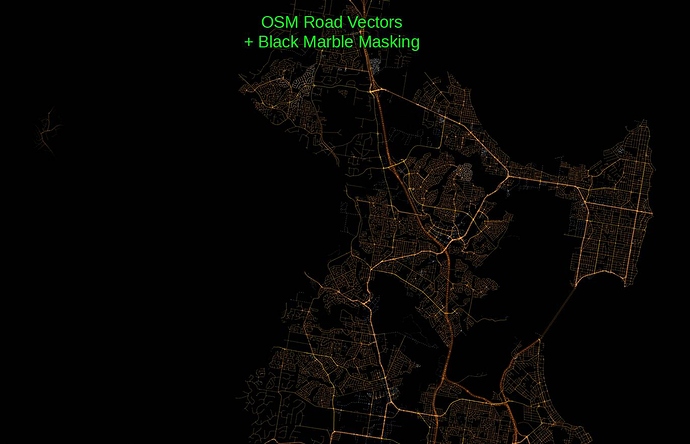 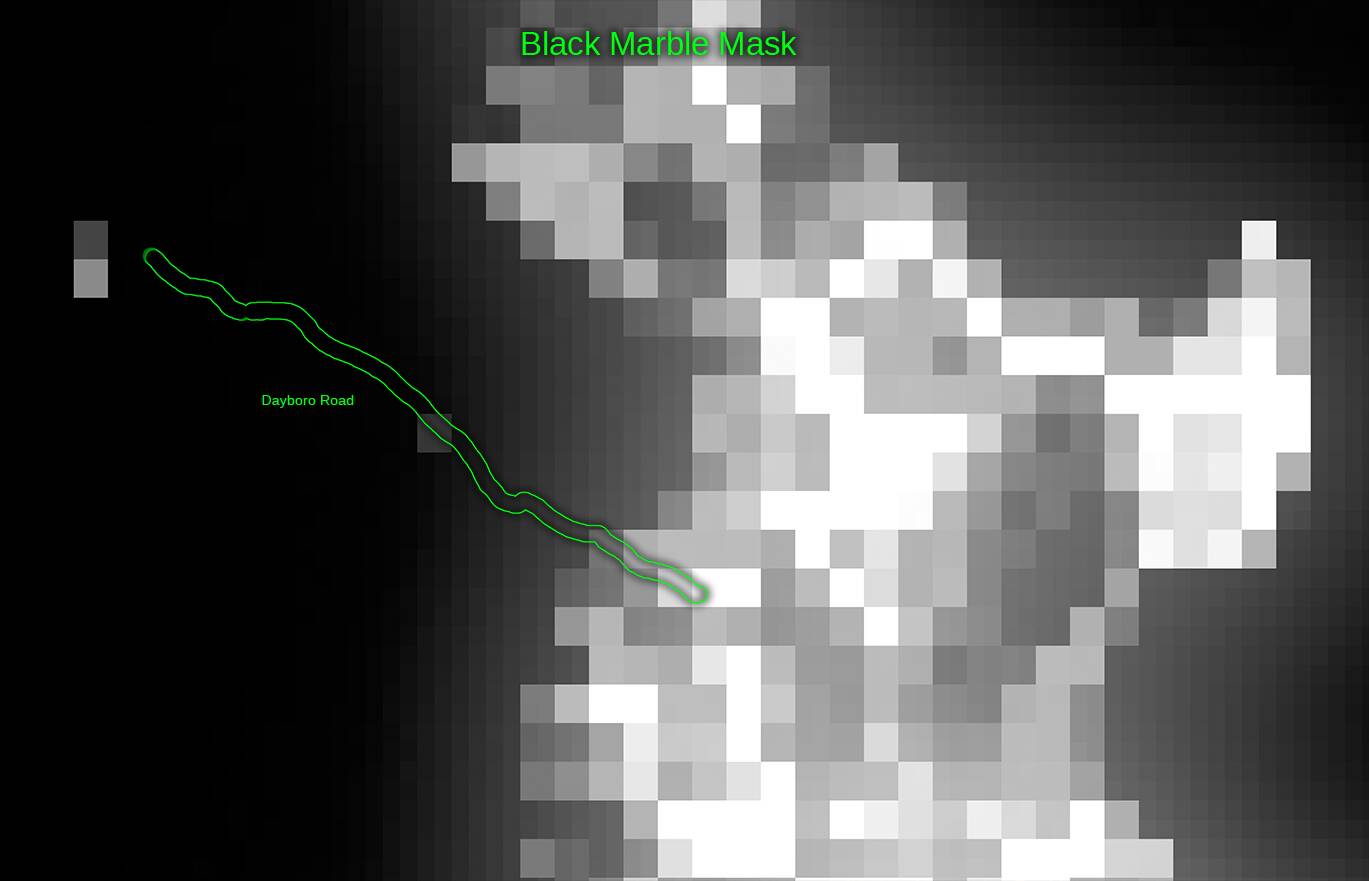 There are many ways of generating relevant masks if not using the Black Marble data set.
A few examples would be house-density/proximity, proximity to residential/commercial landuse polygons, as well as major road intersections/links and so on.

That’s what I’m talking about, the Black Marble data set.

Street lights have covers over them!!! They light up the road not the sky! Tone the ufo orbs down and increase luminance of the road would be so much better! The road should be bright and visible vs the orbs

I would also like to add my vote to this topic. I find it most disconcerting when looking down before landing and seeing the pearl necklace

I’ve nearly crashed a couple of times because of this

I think you took my comment out of context.
Please read the comment that I was replying to.

The previous version was able to light up the proper roads, i dont see why they can’t make that happen again…now at night it feels like im flying in X-Plane…