Disappointing mountain terrain (in the alps and many other areas)

I am more or less where you took your picture… there’s a low def area there. But the peaks on horizon are better defined in my case : 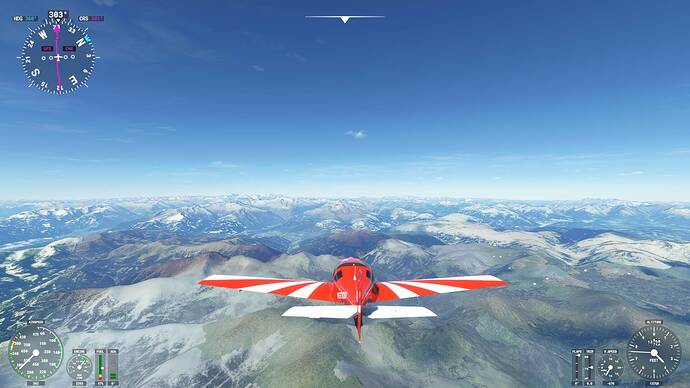 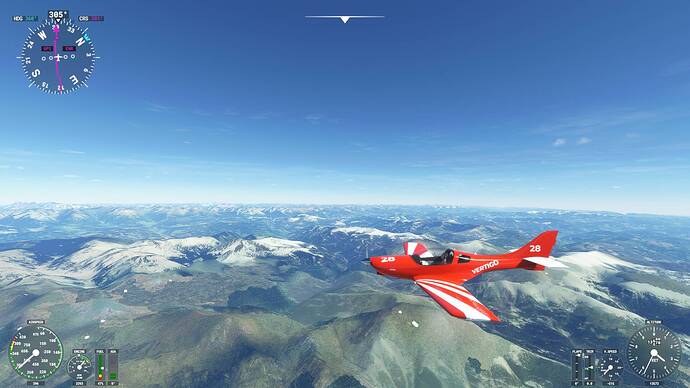 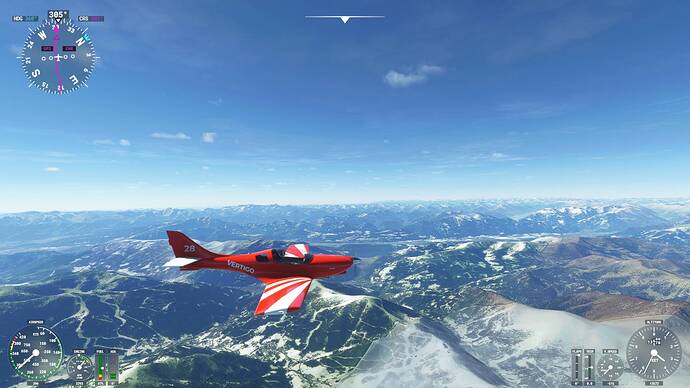 Yes shortly after I posted I became so tired (physically :D) that I diverted to Salzburg and towards the airport the mountains became amazing. It seems it‘s the region that has got low attention for some reason. Just weird as it‘s directly next to one if their hand crafted new airports.

When the mesh is right, boy is it right.
I just flew around in Switzerland and made a hop over to the Sphinx Observatory and then flew a low pass in VR.
The DEM is insanely good now.

i was in the SR22 aricraft (still needs a lot of care from Asobo) from LOWI (innsbruck) to St Gallen LSZR yesterday.
after WU6, DME is better than before but still the mountains i found very rounded. flying basically next to them via Imst, St Anton, Bludenz thru the valley. For me knowing the mountains from various tours in summer and winter not very nice.

hope is better with the Austria 10 m dme project from Troglodytus
sorry no pictures, i was with VR: maybe switzerland is better.

It seems it‘s the region that has got low attention for some reason. Just weird as it‘s directly next to one if their hand crafted new airports.

That is weird indeed but not the first time. The handcrafted Svalbard airport that came with the Nordics update is surrounded mostly by very poor imagery. One wonders why they don‘t consider these things. It‘s a spectacular airport but I see no good reason to fly there when the surrounding area looks that awful.

By the way, for thouse who don’t know: I created a mod for the mountains of Switzerland that removes all the wrong placed trees on top of the mountains: 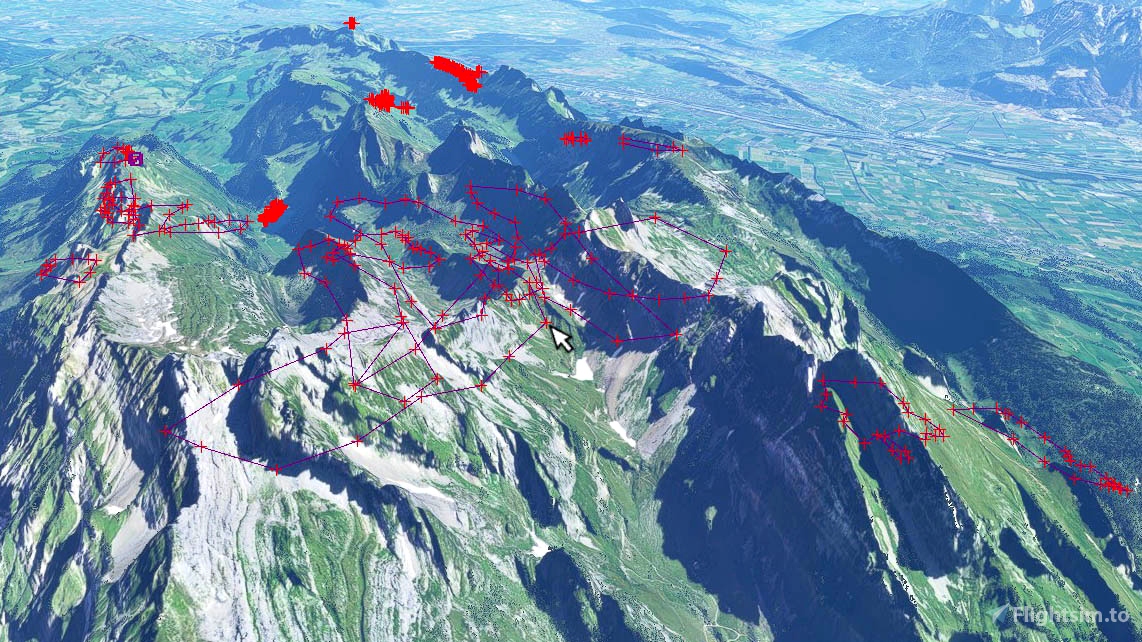 ✓ Swiss mountains tree fix (trees on mountains removed) is a Microsoft Flight Simulator 2020 mod created by THEOLI4D. Download for free to enhance your experience in MSFS 2020.

It is disheartening to hear in Q&A session after Q&A session how this issue will be fixed in WU 7, 8, 9, … and that the solution is a denser mesh.

That is not the main issue, IMO. Mountains look good from up close and horrible from a distance, where “a distance” is just a few miles.

Terrain morphing is the problem. Something more clever than just a LOD slider needs to be the solution, so the sim maintains those aspects of terrain that is needed for the appearance of sharp mountains at a distance (mainly mesh), and LODs out those aspects that are less important for that appearance (e.g., texture resolution).

Screenshot 2021-11-29 21.10.521920×360 80.1 KB
Has one of you guys ever seen such thing before? happens only in Switzerland, after SU7 with WU6 installed and with bing and all online services on… All graphical options are set to ultra. Outside Switzerland the terrain behaves normally. The stairs are only visible in very low altitude, but crucial to heliops…
TheRealOli4D December 3, 2021, 4:54pm #528

I think that’s how they Swiss terrain data Asobo got looks like. I assume.
The terrain in Switzerland is probably BY FAR the best with have in the sim now. (Since WU6).
I also don’t know why these stairs happen and I hope they fix it… but even with them, the terrain quality is so much better than in any other country.
But sure, I agree, the stairs are annoying.

Thank you Oli
Glad to finally read, that I am not the only one seeing these terrains. I drove me nuts… Yes, you are absolutely right with your point about the best terrain for our country. Now I just do hope that Asobo once will fix that detail. Btw: love your scenery work! Thank you for that!
Flüügergruess
Chrigi

I don’t think this problem is getting the correct attention from Asobo. In each wishlist it’s listed as “ongoing with world update”. So they think this can be solved with the terrain digital elevation improvement with each world update. Not so! This is not a DEM problem. The smooth and rounded look we are talking about is not caused by lack of high resolution mesh, even though the updated mesh can improve it a bit. It’s because of the algorithm that determines the jaggedness of the terrain. In X-plane even if the mesh resolution is 30m, it still looks much more jugged than in MSFS. In Google Earth there is even an option to adjust the juggedness of the mountain, so it’s definitely the problem of the algorithm of the juggedness. I really wish Asobo can also implement such an option to let the user to decide the juggedness of the mountains just as Google Earth does.

yes, some peaks are really sad just like the k2 with a hole 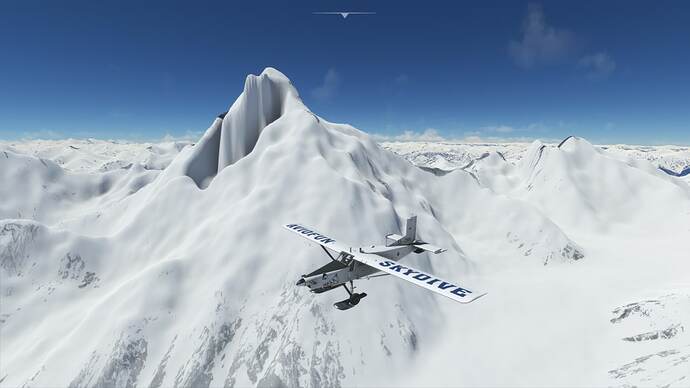 I see what you mean, but if you look at the request in the original post, it’s talking specifically about the low resolution and inaccuracy of the mesh in specific areas at release. Part of the request was also incorporating the Swisstopo data and improving the appearance of the Matterhorn, both of which have been fulfilled. It doesn’t say anything about rendering the existing data in a different way.

I would recommend creating a new thread for your request.

A new post won’t have enough votes as this one to make it into top wish list for Asobo to notice.

That’s true, but what you’re requesting does not belong in this thread. The original request is about data, not about how terrain is rendered by the MSFS engine. Asobo have said many times that they do not want “megathreads” in the Feedback Snapshot, but rather a separate one for each specific issue/wish. As such, “Ongoing (World Updates)” is the correct answer for this thread.

Also, while it may not make the top Wishlist snapshot, recently they’ve been answering the top wishes from the last three months as well. If a new thread gets at least 10 votes, it will appear in there.

The next time there is a Developer Q&A, you may want to ask that as a question.