There are no Honeycomb drivers. The devices are natively recognized by Windows. Integration into MSFS is done by Asobo. Honeycomb products with without issue on XP and P3D.

Kudos to the WT guys too!

Looks like the G1000 and such will get huge improvements. Now that WT is there, we will definitely get a lot of improvements

Any news on FBW?

So the short answer is:

Sim Update 3 is the beginning.

I had a very similar problem flying ifr in a g58. G1000 kept returning to last waypoint and ATC option to request IFR suddenly appeared.

Mine too - 300Mbps or there abouts

I triggered it again, planning a route on the world map. It was fine for a while, then after having to zoom in for one of the smaller airports, CPU 11 full load again, < 10 fps, unrecoverable. Resetting the route, going back out to the menu, no change. Zooming in now drops it to 1 fps. 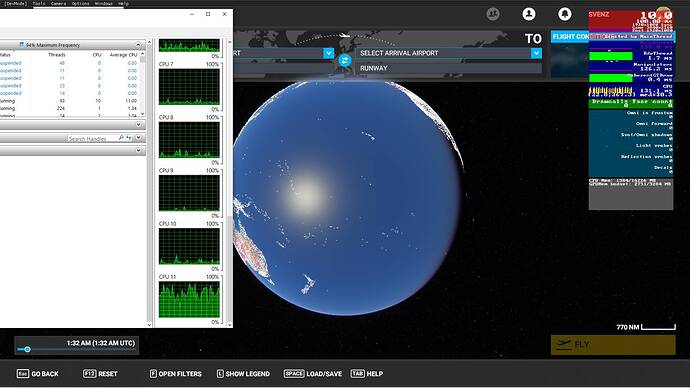 Hopefully I can get off the ground at all tonight. I would work around the map being slow. I can build the plan in LNM, load it, and select a start parking from the drop down. 10 fps is enough for that. However, 15 fps in the sim sitting cold and dark at an autogen airport in a non PG isn’t enough to fly. I can’t imagine how bad it will be if I actually get into an area that actually requires CPU power.

Honeycombs devices are, like 99% of all other USB input devices, sort of “generic”.

They have some number of axes and some number of buttons, which can be on or off. Thats it. It’s exactly the same interface as an XBOX controller or any other joystick.
So whats the problem then? The switches on Honeycomb devices (like on other devices, too) are mapped to two input buttons, so that one of the both buttons is always being pressed, depending on the position.

What did Asobo do? If a joytick button is held, they handle it like a “modifier is pressed”, making bigger steps. Might be wrong, but I heard, that that is a bug which even existed in FS versions before?

So what the actual ■■■■ is going on there? Handling inputs correct is a very easy thing to do. If you cannot fix that within one day, you’re literally the worst programmer on earth.

And the aerosoft crj is going to be released on th 16th yeahh what a mess like most of you guys i had big drop in performance oh well wait for next up date maybe in a year we’ll be good lol.

Unfortunately my game is now also a stuttering mess

If a joytick button is held, they handle it like a “modifier is pressed”, making bigger steps

That right there is EXACTLY the issue. It has nothing to do with Honeycomb or any other 3rd party hardware.

Handling inputs correct is a very easy thing to do. If you cannot fix that within one day, you’re literally the worst programmer on earth.

That’s a bit harsh. The issue is Microsobo’s priorities, not the skill of their programmers. This is not an issue that affects development of the XBOX. And with that launch being 3-4 months away, THAT is their priority internally, regardless of what they may claim publicly. They want those XBOX dollars.

If we are having this kind of performance issues whats it going to be like when we introduce a demanding aircraft like the aerosoft crj I will be waiting for an improvement before i buy the crj.

That is a sad reality and perfectly reasonable.

Somehow my liverie Testpilot cessna 172 classic is not visible anymore after the update.

Uninstall and reinstall the plane and all the liveries in the contentmanager didnt change anything. The other planes are good and the testpilot liverie are there.
The liverie is in the onestore and looks complete, but not visible in de select window…
Very Strange, Anyone else with this problem?

Yes it is. But Asobo needs one year to slow development speed down enough that they can give a two weeks ahead (pre release) in front of the “the masses” deployment. And next problem: The pre release is not only the client side of the system, but the server side, too. Asobo has hopefully an internal “small system” for development. They have to duplicate this “small system” to a “3rd party pre release system”. Then they have a three steps roll-out: From the internal to the pre release to the public. This costs money and slows down the deployment! Some Asobo or Microsoft bean counter will prevent the “do it right” approach.
But thank you for this exchange of ideas. And yes, I work in such an environment. And no, we do not produce flight sims.