Try resizing a window like the VFR map over the cockpit then close it, that usually works

You’re not alone in this. I have the exact same issue. I can, however, load into the missions and other bush fields challenges plus some of the not so large airports. I posted here and in other forums hoping to get some clarity. I totally against making any bios or other CPU changes. Shocks I’ve been flying with my current specs since the beginning of my Alpha testing. I also thought to uninstall and reinstall the entire sim, but I see here that it did not help you. I like you, am at a loss. I even thought that updating my GPU driver…but that made matters worst.

CTD for me,
After my MSFS2020 update-5-hotfix-1-10-8-0 I was once agin enjoying my simming. However today unexpectedly when starting MSFS and the first black window opens after about 3 seconds it just closes CTD.
I have tried starting without any controllers and empty Community folder. Still no joy - repair it no, reset it no then uninstalled it and it still doesn’t work. It isn’t installing properly now.
Has anyone else had this issue and is there a fix, please.
Yours an enthusiastic fan of the sim but feeling disappointed.

I have the same exact problem. Sim worked fine 2 days ago, now I get a CTD instantly after seeing the black screen during startup. Windows event viewer shows the following error:

Have you tried to turn off the Real Time Protection in Windows Defender to launch ?

Many other ppl had this issue since yesterday and resolve the problem with this workaround.

After launching your flight you can re enabling your protection.

Thank you for the info @ Thelonious7508, the game did not want to launch, and indeed that I deactivate the protection in real time of defender, the game starts, incredible !!! Better and better bravo

Now you can play with real-time protection - on.

right click on powershell and select run as administrator

I was having that problem, too. I solved it by “emptying” my community folder, except for the livery I have been using, and a mod to make those labels disappear when you hover over a switch or dial.

Haven’t had a CTD since. Knock on wood.

Something in my community folder was causing it. What, I don’t know, and it’ll be a pain in the ■■■ to figure it out, considering I have ~500 mods. (But that sounds like more than it really is, the overwhelming majority is the megapack liveries from Clink.)

PS… When I say I emptied my community folder, I don’t mean I deleted anything. I just created a subdirectory called “Retired” and moved everything (except the two I mentioned) into there.

Have you emptied your community folder?

So what? Seriously, yes it’s a bug, and yes, they’ll eventually get around to fixing it, but it doesn’t break the sim, it doesn’t affect performance, it doesn’t do ANYTHING except flash lightning and make thunder sounds in inappropriate places.

Submit a zen ticket and then enjoy flying with inappropriately placed lightning until they fix it, which they will.

Going around forums continually whining and moaning about it is fruitless. And annoying.

Clearly you don’t know that the problem wasn’t lightening. So, make sure you educate yourself before lecturing!! Oh, and I’ll whine all I want to, then you very much.

then you very much

Thank you very much ?

wow, my sim freezes sometimes for 1 whole minute, then comes back. eventually total freeze but windows is still running fine.

This worked brilliantly! Thank you so much!

Have you posted a ZENDESK ticket yet? And if so, what is the status of the ticket currently. Make sure to detail everything for them and they will fix it. Much of your ZD ticket could be copied and pasted right from this post.

Mine freezes for 30 seconds to minutes at a time, then comes back. I guess they are coffee breaks?

Thanks @Thelonious7508. That worked. Much appreciated.

Will use it as a temp fix until either windows updates Defender or ASOBO releases another hotfix.

i’d like you to be more specific on that idea. I just noticed that some flight training and the A320 neo where not up to date. And when i check/highlight them, there is no where mentionned “download”

It sounds like you are in the right area. Unfortunately, it also sounds like there is something wrong with your installation. An almost sure fire fix is uninstall and reinstall. You might try Zendesk to see if they have a less radical idea. If you do uninstall remove everything from your community folder first.

Can you post a screenshot of that? I just want to make sure it’s not due to the upcoming patch.

The team that develops the packages, "aircraft, scenery, challenges, etc.) will push those to the Content Manager prior to release of an upcoming core update or patch.

This happens on every update when there is an update to items in the Content Manager that would require a core update to work. 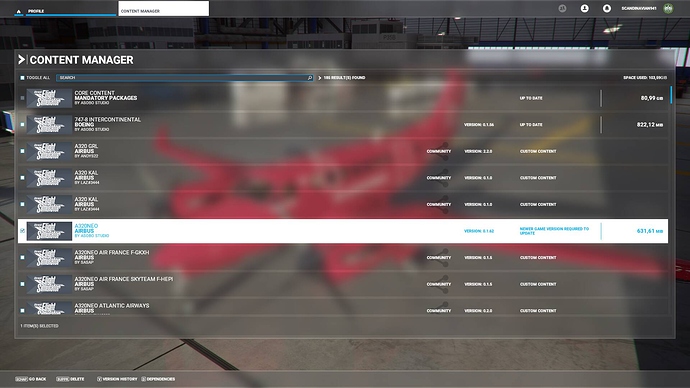 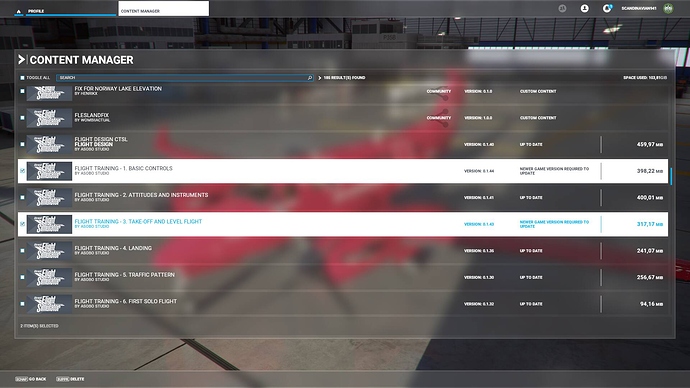 Screenshot (963)1920×1080 156 KB
on this last one, you can see an update avlbl for EKCH from FlyTampa, and for that one, the option download was visible, and worked 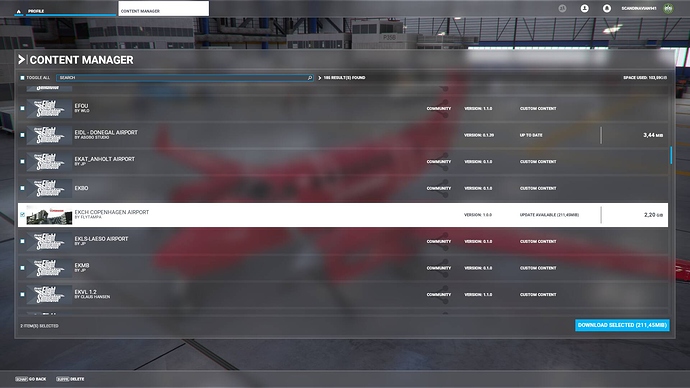 since the correction on their last patch/update, it looks now that i have 2 versions of the game.

Thank you. Yes, so what you are seeing is related to the upcoming patch where the content is there, but the core has not been released yet… which I think is Tuesday.

This will always occur when there’s a update to both content and core. Content gets pushed first so that it’s ready when the core comes out.