If the vision of a very high wall can be used, there is also in Bologna - Italy where I live. Actually along the side of the hill, in reality, there is a long portico that leads to the sanctuary. The wall appeared after the update 3.

When flying over the Humber Bridge there appears to be two levels?! Like a mini bridge that runs under it. It looks like the game is rendering scenery and showing a bridge underneath the newly created point of interest. I deleted my cache but it’s still there. Is that the same for everyone or is it just me and my game?? EGNJ 350° Ish for anyone looking for it.

I turned off photogrammetry and the second bridge disappears, which would suggest I was right about it rendering scenery and conflicting with the POI. Would appreciate someone giving this a test to see if it’s limited to just me.

Turn off the photogrammetry in the settings. Your internet bandwidth is not big enough. I had the same problem. Don’t worry, because you still get all the interesting features.

I have done that already, but a 250Mb/s stable internet speed is not enough?
I think the problem is not my internet speed, but the speed of the Microsoft server.

I have to ask… From what altitude are you viewing the scenery when it resembles “a mess”?

While I’m at it, has anyone else experienced some unexplained performance hits in this area, near EGET? 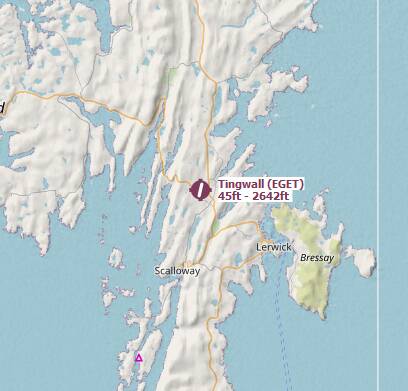 It was fine to the as I travelled from the South, and when I headed West, and North away from it. I didn’t check the frame rate but I would imagine it was low double digits. Very odd, as there didn’t appear to be any scenery that might explain that.

Decided to Fly out of London where all the mess is and get down low on the outskirts, much nicer 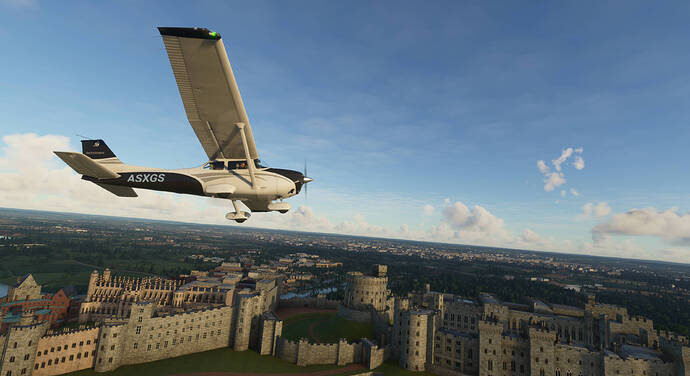 Thanks for the honesty. Photogrammetry is never going to look ‘handcrafted’ or even half as good as autogen as long as the data being used is derived from moving aircraft and vehicle scans. Without going into a drawn out explanation, the stitching algorithms just aren’t that good yet.

As an experiment to help with perspective, you can download a free app for your phone that will allow you to take multiple pictures of an object from various angles and it will then create a 3d model of that object. The number of pictures and the accuracy of finished model are directly related. With a bit of practice you MIGHT be able to get a reasonable rendition of your whiskey glass that does NOT look like it melted along with the ice.

Photogrammetic scenery is created from a relatively small number of photos taken at various times of day from relatively unstable locations and the algorithm then attempts to stitch it all together to render a 3d object. Looks fine from a couple thousand feet away but the closer you get the more the image is overcome by the limitations of the data and the less it looks like a building.

The handcrafted buildings look wonderful but the rest are a mess when you get close. That is the reality. No amount of bandwidth or graphic card tweaks will change that.

Just looking at the topography, it is possible that the amount of elevation data and resolution may be affecting performance.

I thought that, but it would have to be quite concentrated to one area. Fly a few miles North, or South and it’s fine again. I didn’t see it anywhere else in the Shetland’s, or at least the bits I visited.

This is the reason why maybe we should wait a bit as probably the server system over London is overload. The strange thing is that the dev team didn’t write or announce anything about it and we are here to make suppositions.

At least they could make a small announcement and inform the community what’s going on. Would be very appreciated.

Edinburgh invaded by UFO’s
strange orbs in the sky… 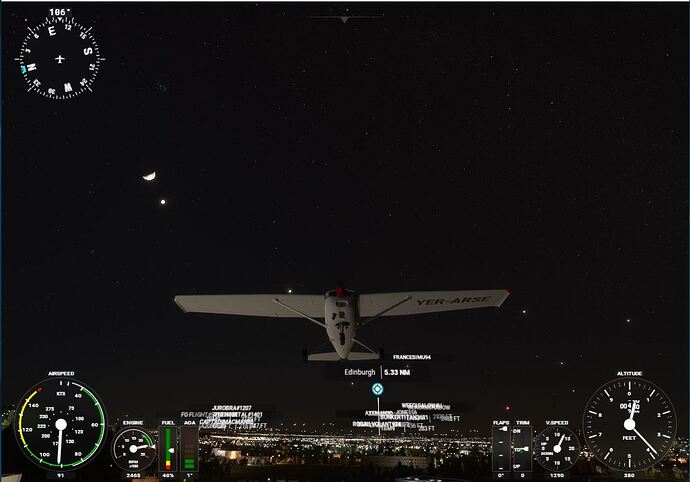 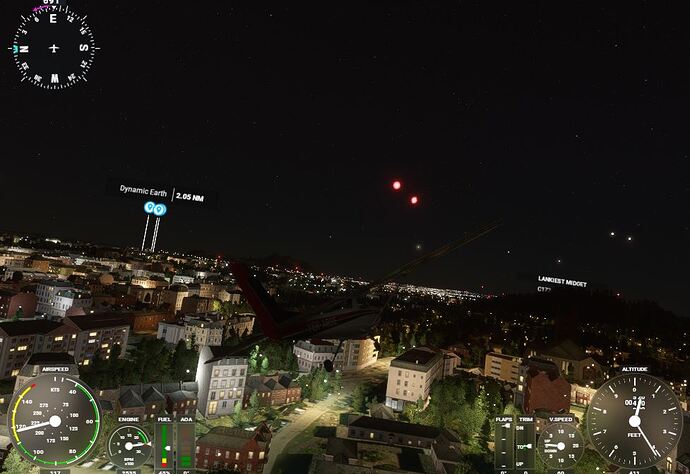 I actually quite like the slightly rough look of some photogrammatry. At least it gives things that slightly weathered, slightly dirty, slightly real look. By comparison that Orbix Sydney city scenery just looks way to clean and perfect for me. It looks artificial in the sim. A bit like the 3D models of the UK POI. The houses of parliament and buckingham palace really stand out almost jarringly against the rest of the London PG.

I find this debate quite funny. If you had told me even 18 months or 2 years ago I’d be flying over an accurate model of London in an entire planet Earth spanning flight simulator I’d have a hard time believing it. The next gen tech powering FS2020 is incredible. It really is a marvel. I find it funny that people are all too ready to pick holes in it for not being quite perfect enough. And thats not even taking into consideration all these world updates are totally free. I can’t imagine any other game developer in the world providing this sort of content without charging a hefty premium for it.

Ok looking good well a lot better, only gripe is we now have a lot of rivers where roads where and the farm and dog pound behind us is now a multi storey block of flats I’m sure the farmer is happy and the dogs must be out of there minds living in a multi story condo, but apart from that not bad.

Then don’t get that close! It’s a flying sim, not a driving one!!

But I don’t care because I don’t fly that low, because, and at the risk of being repetitive, it’s a flying simulator, not a driving one.

Yeah but that’s your decision how you want to play this sim. Others want to fly low and that’s ok too. Why not? It’s a flying sim. As long as you’re in the air you are flying.

After all we got ultralights and helicopters will come sometime in the future. There are choppers flying between skyscrapers in big citys. So it’s not even unrealistic to replicate that.

Really weak argument with the driving simulator. After all we’re not taxiing around all the time. If you are happy flying 3000ft above ground - good for you. I’d like to do aerobatics between highrise buildings and try to land and takeoff in the streets. That’s the fun of a simulator - nothing bad can happen.

So please stop telling people what’s “real” flying and what’s not. Thank you.

So please stop telling people what’s “real” flying and what’s not. Thank you.

that was my thoughts exactly when i read that.

Random question: do the version numbers have some kind of meaning? Do they say somethig about the types / size of the update?