Beta test - Runway about an hour ago KDLH (Duluth MN) it was snowing out and snow on the ground but the runway was just wet with no snow on it.

While not the answer you were looking for for Steam users, see this post from Jayne:
https://forums.flightsimulator.com/t/official-discussion-december-2nd-2021-development-update/478126/5

I think it’s the white hue of recently cleared & salted pavement. The winter ground textures don’t appear to be snow on the ground. It “looks” like dry pavement - I wouldn’t be surprised to see tarmac like this in the real world.

These fixes are a part of the announced flight (pre-release testing) that starts on Monday. It is set to “ASAP” since the release date for that update is not set currently.

if ya like KGPI, i would recommend getting this payware AddOn:

Is there any chance the fix regarding WASM modules is the issue effecting certain 3rd party planes on Xbox, such as the Spitfire door not closing in a cold and dark state?

The developer said it was confirmed by MS to be an issue effecting multiple 3rd party planes that stops WASM code from running correctly on Xbox. I can’t get any update from the developer about it except that a fix was found in early November. 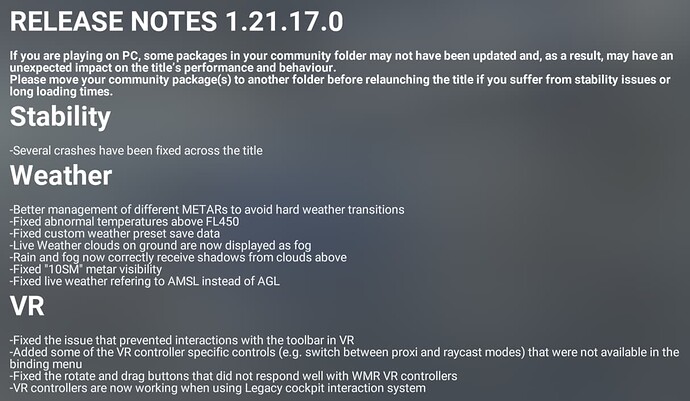 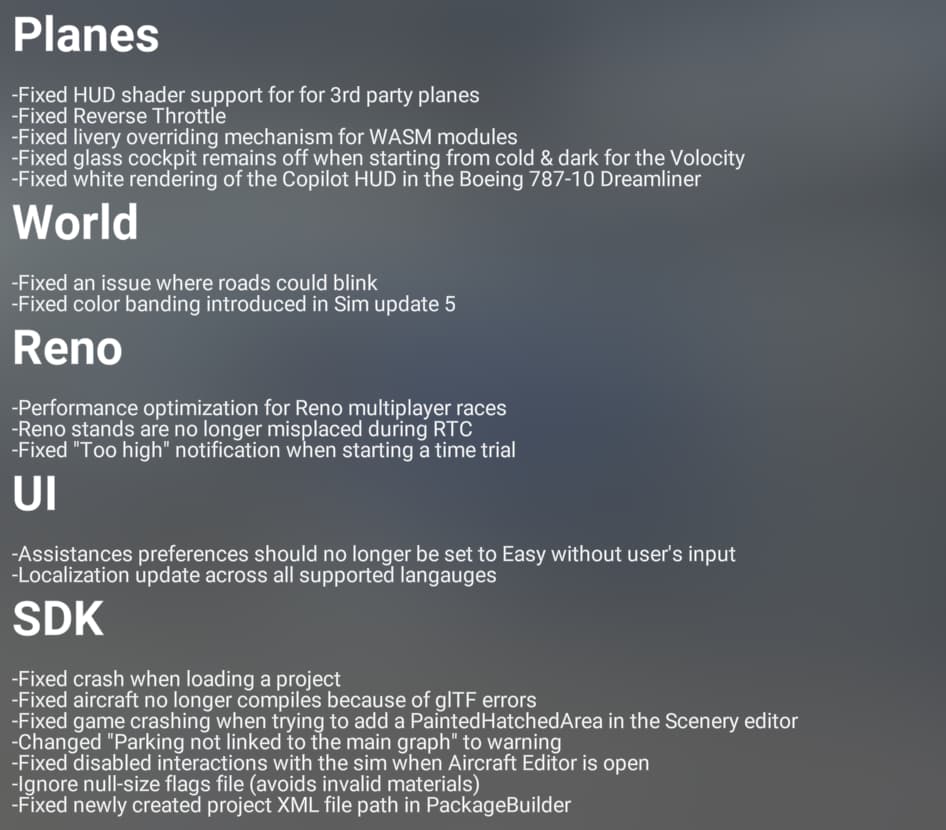 Can confirm after an hours flight that:

Here are the release notes for those who can’t wait

That list looks good and addresses all the major issues I have with SU7, namely high alt temps, METAR transitions, AMSL/AGL mix up, VR toolbar and reverse thrust functionality.

Initial reports of results here seem very good so here’s hoping this beta gets through to release as soon as possible, before the end of the year ideally.

Does this just patch the current official version or is it a totally new install?

Looking to the responses I cannot imagine that it will take that long. Asobo has focused wisely only on the main issues. Most people acknowledge that the issues in the release notes are indeed fixed.

Let’s call this the X-Mas patch! It seems we’re on hold for take off towards a splendid holiday!

Live WX KAUS. This is interesting…

Yes, with this patch, id say, we can enjoy the sim over our holydays and the team can enjoy theirs to take a well deserved break too.

After few hours of testing, i have not encountered anything that bothers me. Lets see what happens when the feedback forums open tomorrow and a bigger crowd steps in.

Yeah I was following a tube the other day and while his contrail stayed perfect the plane itself looked like it was going to be something out of Air Disasters show. But then as quick as he was spinning out of control, he was back to flying a nice normal track…

After few hours of testing, i have not encountered anything that bothers me.

I caught a common cold from my niece at Thanksgiving dinner, so had the time to spend many hours with MSFS beta this weekend. Tested my usual airplanes’ flying characteristics and thought that the flight models were good. Always room for improvement (see wx transition above), but definitely no dealbreakers on my end so far.

Did anyone test the steam gauge Cessna 172 to see if VR controllers are now fully supported with 1.21.17.0 as I did not see that in the release notes.

The one thing I don’t see listed in the release notes is a fix to the misaligned mouse pointer in the cockpit. While this can be worked around in 2D by turning off lens correction, there is no such setting in VR so with any switch knob off centre of view the mouse is increasingly off proportional to how far off centre you are looking.

It’s not the end of the world if a fix for this is not in the beta, but can anyone confirm whether or not it has been fixed?