Same problem here, don’t know how to fix it

I agree it happens the same to me as well. I found that if I open the exe.xml after a reboot or the last simulator close, it’s saved with UTF-8 format again. I save it to Windows-1252 and starts working back again. This is a nasty bug who nobody seems what causes it

I have added
(<?Descr>Launch<?/Descr>
(<?Filename>exe.xml<?/Filename>
to the top of the file to match (icebird4all) file and removed Run as Administrator for the Couatl program.
Launched the MSFS2020 as administrator and all are running. 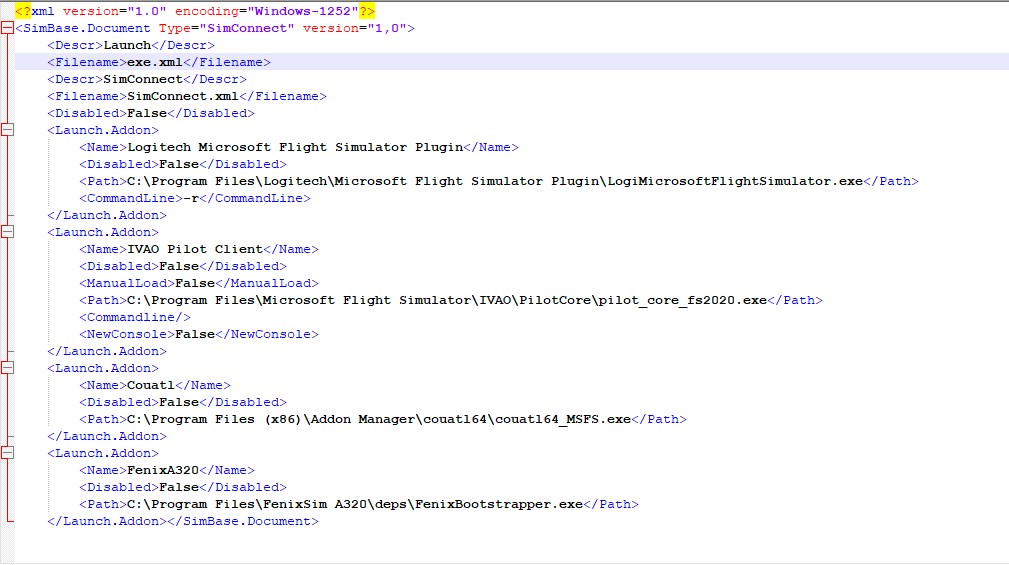 @MuchoJamone
Interesting.
I don’t think it changes for me, but I don’t think I saw the issues described here yet.
For me <?xml version="1.0" encoding="Windows-1252"?>
always remains on top.

That helped me mate! Thank you very much!!!

Credit goes to @icebird4all I found it on his reply to the topic.

Hello, non of my programs are in admin mode and nothing starts sorry

This happens way before 1000 addons ^^ My community folder consists of 90 Addons and this happening.

For me this continously got worse, with every entry* (please read the explanation below).

Now after GSX and Fenix, it went to 0%. It doesnt load at all now.

*of course, many other things happened in this time also. This is how it appears but with many simupdates and addons added, the cluprit be somewhere completely different of course.
I also dont want to say that one of those addons/entries in the file is causing it. Its just how it appears to me. It works at the beginning and went worse over time. From 100% to 50% to 0%.

Btw, why do some of us have

Some third-party apps directly create or update the exe.xml file. I have one app that does that. There is no error checking on updates or changes except sometimes things don’t work correctly.

Hello, yes it depends of the app that has created the Exe.xml. For example: FSUIPC will create with “Launch” but GSX will with “SimConnect” if there is no existing EXE.xml there

Hi I am using this exe.xml, FSRealistic and Traffic injector start with no problems, but Realturb do not, any idea?

on your file I saw that your Name is Rea k Turb but your software name is Rea l Turb not K.
I do not know this software but is it a mistake if you fill in form yourself the exe file.

Thanks!, I fixed the typo but my understanding that it is only the name for that