The new import of the route and flight stats in the FBW A320 Neo works extremely well and is very impressive progress. One question, once you complete that setup in the MCDU, how do you request IFR clearance without going into the MSFS flight planner and messing up the imported details?

You should have an option in ATC to request clearance for the flight plan. But be aware, that the cruise alt won’t be cleared. You have to request higher cruise alts during climb.

I have this same problem every time with the .5 FBW. I also had the issue with dev version every time. I never had the issue with the .4.1 stable, but now I guess I’m screwed. The only way I get to request clearance when the checklist calls for it is if I build the flight plan in world map, add only the departing gate (so that I can start cold/dark) and change NOTHING else. If you try to change runways or make the plan match the route SImBrief gives you - you done screwed up. You HAVE to do exactly what MSFS gives you in order to get ATC/copilot to work right for IFR/pushback & comms assist.

It drive me BATTY! I don’t know what I’m missing that blocks it from working. The flight plan is complete, no discontinuities, etc. I wish like Hell someone at FBW can tell me what they’re doing to cause the mishap. There is some flag in the MCDU somewhere I feel like that tells the sim you’re ready to request IFR (either normally or by instrument plan loaded).

All we need is a clear process to follow to avoid the headache…anyone please!?

I just tried this and flew with a SimBrief injected OFP. It was perfectly done from the PERF INIT forward.

FSL A320X RIP. And I won’t lose any sleep over that whatsoever. (Having lost sleep about 2 years ago fearing what spyware might have been injected in to my flight sim PC)

I love this simbrief integration. My Question is after a flight can i enter a new route without going back to to HomeScreen. Until now nothing found. Maybe someone can help.

Yeah, this is a know issue. But not A32NX related. It seems to be impossible (even with the world map planning) to give ATC a dep runway of your choice. You have to live with what Asobo ATC gives you. And changing anything in the world map changes the whole route. I hope Asobo is working on that.

Normaly I keep the coms assist off until taxi to runway (all the coms before, I do myself). Then I turn it on. So the first thing the co has to do is requesting takeoff at the rwy.

Ordinarily, I would agree with you but I think this one might be something that, while not caused by A32NX, can be solved I think by A32NX. My evidence is that while using prior versions of A32NX stable (up to this new one) I always set my plan up in MSFS, manually copied any changes into my SimBrief plan to match (for fuel planning and copying the route into SkyVector for tracking/weather), and then made sure I was starting at gate and that the runways and approaches matched. When I would get into the sim, I never had an issue getting clearance and pushback and then allowing copilot to handle comms form there…flight after flight. Any time I tried the dev version, or since this new stable version, I almost can never get the Request IFR Clearance to pop up and can consequently also not request clearance to taxi or takeoff.

Now, interestingly, if I quit to main menu and go back and do it again, I almost always get the clearance second go-round.

I’m convinced it has something to do with the way the plan is loaded in stable .5 and in dev version because the MCDU always had the departure listed white in prior versions and it shows up as green in these, and the next waypoint after takeoff is white (either from MSFS or from SB import).

I dunno…I’m just trying to isolate it and that’s my observation.

Overall, I LOVE this mod, and it’s made the A/C totally enjoyable reliably, when I can get clearance, but I HATE not having proper clearance at the gate for IFR and taxi. I’m not saying that anything is even wrong per se, because all we need is a clear cut process that works every time - as it is, when clearance isn’t an option, the checklist is wrong. If the point of A32NX is realism, I assume they want the process to be the right checklist flow and work as expected every time (up to the limit of their control obviously).

I’m totally not complaining, again, love what they’re doing - I’m trying to point out an issue that I feel like they can rectify perhaps. Keep up the great work guys. An amazing mod and we’re so lucky to have y’all’s commitment to quality on this!

I just bypassed the simbrief part and using the world map. So that is an option if it bothers you too much.

For those of you using the A32NX where it never gives you an issue with IFR, how do you get it every time to work? I’m open to the idea I might be doing something wrong but can’t for the life of me figure it. I follow every single recommendation and checklist. I dot every i and cross every t. Maybe I’m doing too much?

If I don’t put a destination at all in the world map, only the departure gate and airport (no arrival airport, no SID/DTAR, no approach), and then do the import thru the MCDU/SimBrief will it populate the Request IFR Clearance from Instrumentation generally? If so, I understand it is not correctly importing CRZ altitude, which means I still would have to request the desired FL every flight - is that right?

If so, that hardly seems like it’s more accurate than what was working before? Back to A32NX team again for the fix, not Asobo if so. Any way you slice it, this is I feel like for them to remedy (maybe the import should correctly populate the flight level from SB and it would totally fix the issue - we’d just have a different procedure to follow in pre-flight than the original FBW checklist)? Not saying it’s their fault, just saying they seem like the best ones to fix it since it’s pretty much their pre-flight process and they’re quick and accurate in their work.

Please let me know what you guys do that are using the A32NX that works reliably to always allow request for IFR clearance at the gate, with correct FL in your plan, and with clearance to taxi/takeoff. I’m open to suggestions. Thanks all!

Is it possible. to enter only a departure gate and airport in the World Map for an IFR flight? I think it can be done for VFR flights. I know that if a destination airport is entered with no departure it creates a training flight for practicing landings.

I understand the problem. Maybe there really is a change in the way, the flightplan is handled in the MCDU (due to simbrief integration). If you would file an issue on github, and explain the problem as clear as possible. Maybe some of the guys who made the simbrief integration find out what the difference is.

For those of you using the A32NX where it never gives you an issue with IFR, how do you get it every time to work?

Flight plan and other data is now loaded and ready to submit to ATC (at least my assumption is that it will be submitted when you request IFR clearance, but not sure).
In AOC PERF W&B section, you might adjust fuel and load weights.

DEP RWY, SID, ARR RWY and any VIAs are not copied over from SimBrief. These are subject to ATC decision.
Tune Ground and ask for IFR clearance.
Set DEP RWY as commanded by ATC, and SID to your discretion (I never get a SID from ATC).
Request Pushback and then taxi clearance.

The only issues I have:
(1) ATC will not clear you for the FL you planned in SimBrief. You can mitigate that with FL increase request(s).
(2) Once you get closer to your destination, ATC will assign ILS rwy and VIA and you can program these in MCDU, but for me, the plane then always goes back to the last waypoint before the VIA, sometimes 30nm back… ATC is always too late and in MCDU, I cannot change that path. Not sure you could just “test-wise” enter destination airport in MSFS Welcome screen to see which RWY it will choose and then program this rwy before departure already.

But make sure you start your flight with just departure airport and gate entered.

Thanks for that. It sounds like neither way is perfect. If I use MSFS I sometimes don’t get the IFR request option, but if/when I do it seems to work perfectly in regards to ATC/copilot assist, climb to FL, etc. On the other hand, if IU skip MSFS and use the SimBrief import, I don’t get proper flight level assignment. At least I don’t feel crazy now. Neither option is flawless yet but I presume they BOTH probably will be at some point. Otherwise, this new mod is GREAT! Flies beautifully.

Where can I find my Simbrief ‘Iser ID’? 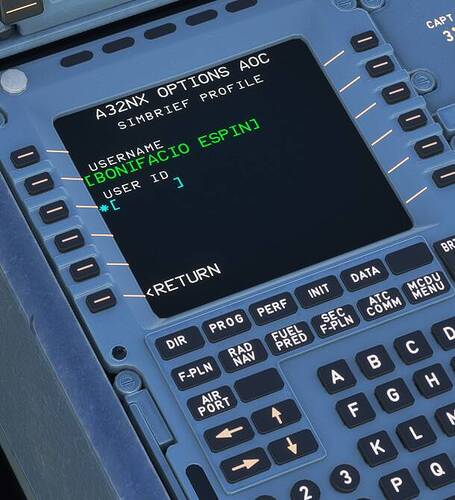 The same times you answered me XD

I got the ifr but once in the air atc doesnt guide me to the crz allt
Anyone?

Once you get closer to your destination, ATC will assign ILS rwy and VIA and you can program these in MCDU, but for me, the plane then always goes back to the last waypoint before the VIA, sometimes 30nm back… ATC is always too late and in MCDU, I cannot change that path.

Same happens to me, but when ATC assign a WPT as VIA you can solve the issue using DIR (Direct-To) and choose the WPT indicate as VIA.

I got the ifr but once in the air atc doesnt guide me to the crz allt
Anyone?

Just request a FL increase. They seem to get random FL but not what you planned in Simbrief.

I guess the ID is the pilot ID assigned by Simbrief (a number). The user name is what you chose for login.