[FIXED ON LIVE 1.19.8.0] You are missing packages that are essential to run Microsoft Flight Simulator. Please update the application and try again

Guys, I have kind of fixed the issue for my setup here. It is defintely Microsoft account related as I had worked out from the start, and requires a bit of messing about to get it to work.

Go into windows settings and repair and reset flight simulator. (Backup contents of Onestore folder here if you wish to save many hours then restore to original location before proceeding)
Start the sim and as soon as the black syncing settings screen appears in the middle of the screen press cancel and then press stop syncing (you need to be quick)
This stops your cloud settings being loaded and you can start the sim setup from afresh. You should then be able to download all mandatory content.

This is not a proper fix though. If i delete my ‘problem package’, because the Sim has now synced, It will not redownload the package again, which will undoubtably cause problems in the future.

At least this proves it is an issue with account settings and can hopefully guide the devs to solve this problem.

asobo-flight-tutorials-default was my missing mandatory package

Where are those threads? Too many to sift through.

[Beleive youcan find something into :

As you know did it with Thugyiunis and told him that we had to thk you since you’ve been sorting out the question of missing files into the OneStore and that I only followed you advices.
He send me the following which I’m forwarding to you accordingly

Unfortunately I can‘t thank TundraGibbon, since I’m limited to 3 posts. Would you be so keen to thank him on my behalf?

Have a nice evening

We need to thank andyjb1037219, he found the mandatory packages file early on

You are missing packages that are essential to run Microsoft Flight Simulator. Please update the application and try again Install, Performance & Graphics

You can find all the mandatory content listed in Program Files/WindowsApps/Microsoft.FlightSimulator…/PublishedPackages/PublishedPackages_Content_Mandatory.xml Here you can see all the packages that sim requires to run. I guess you have one or some of these missing.

OK, Found an even better fix now.
May result in lost saved data though, so keep that in mind.
For me my logbook etc remains intact, I have just had to reset some settings to my previous values.

Navigate to the below folder
C:\Users\YOURUSERNAME\AppData\Local\Packages\Microsoft.FlightSimulator_8wekyb3d8bbwe\SystemAppData\wgs

Inside this folder are 2 folders, one called t, and the other has a long string of letters/numbers. Open this folder.

In this folder are several more folders. I went into each one of these folders and opened all of the files inside using notepad.
Most of them contain saved control mappings. Ignore those.
One of them contained lots of garbage text but also some file names of packages that are ‘ignored’ by the installer. Check the file to see if any of your missing packages are there. I made an edit to this file (Just added a random space in it) and saved it, which effectively corrupts the file.
This forces a new one to be generated which rectified the issue with packages not being downloaded. The installation manager is now able to pick up all mandatory content.

This has 100% fixed the issue for me. Let me know if you need any help navigating to or finding the file. 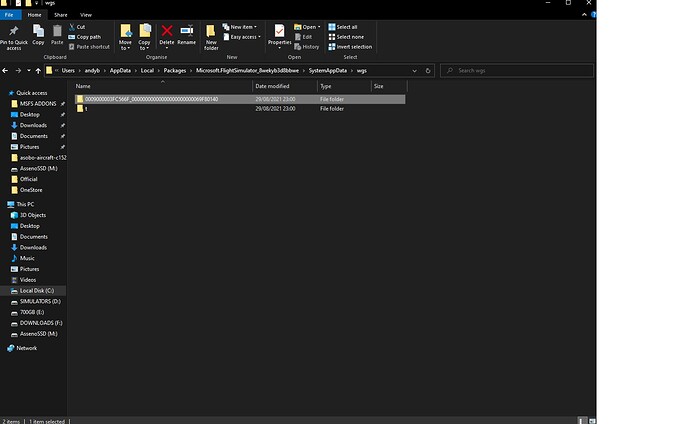 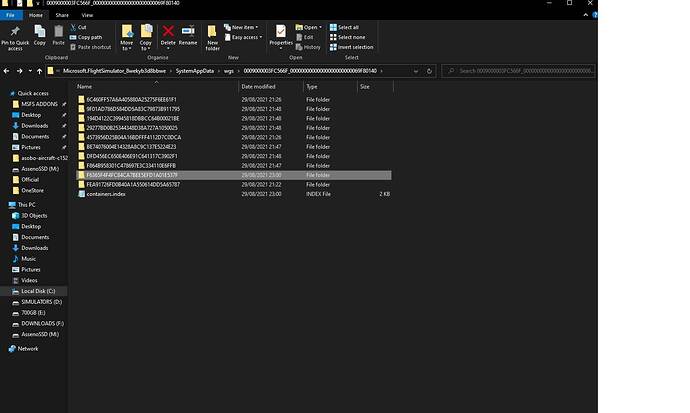 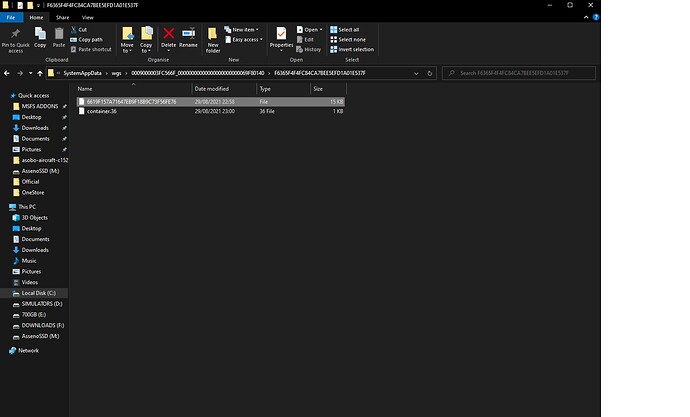 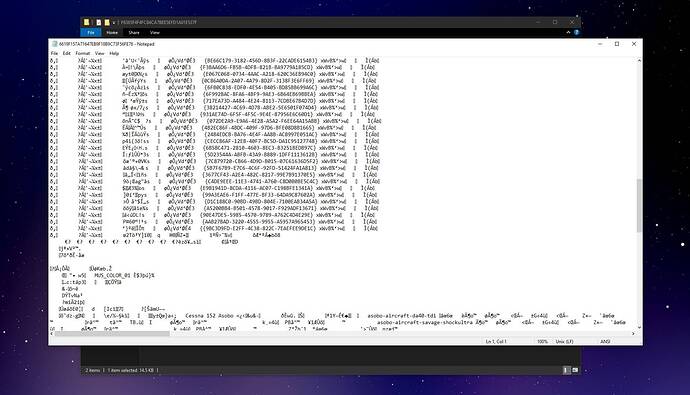 If that works, you are a beast.

Hi From myself and Thugyiunis many thks for all your info.

Will try the last one and let you know.

Hi Just checked at all this. The result with my installation is :
1 - The inside files numbers are different from yours. I beleive that these numbers are refering to the files located into the register.
2 - I found 2 files totally empty and 3 files with garbage.
3 - the last file (Container.index) is also garbage

What do you mean by “Check the file to see if any of your missing packages are there” ?

I don’t really get it when you say “I made an edit to this file…Which effectively corrupts the file”
Where is the new one issued ? 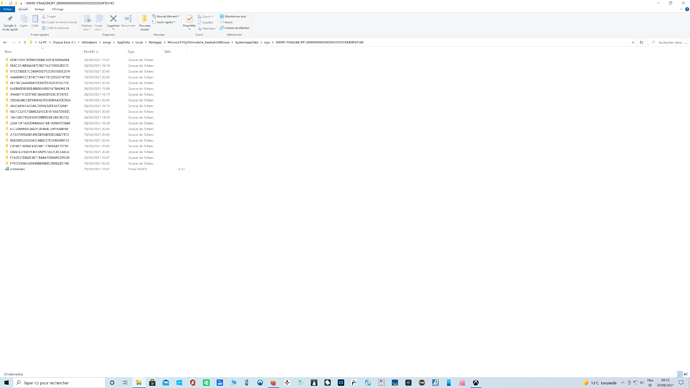 Thks for you possible help.

In each of those folders are 2 files. One is a long string of letters/numbers. That is the one you need to open. When you examine the files, one of them will contain package names somewhere in it. These are packages that will NOT be downloaded by the sim when using your Microsoft account. This is the one that I edited.
All you need to do is make a change to the garbage text in notepad. Eg add a space somewhere, or delete a character from it and then save it.
The sim won’t be able to read it, and will start the setup as if you are a new user.
When you exit the sim, this file you have edited will be overwritten with new, uncorrupted data.

The file you need to change, on my machine is shown below. Yours will look different and have a different name, but you can see there are package names in it (circled). You can also see MUS_COLOR_01 a few lines above my circled area which indicates the music selected in sim. 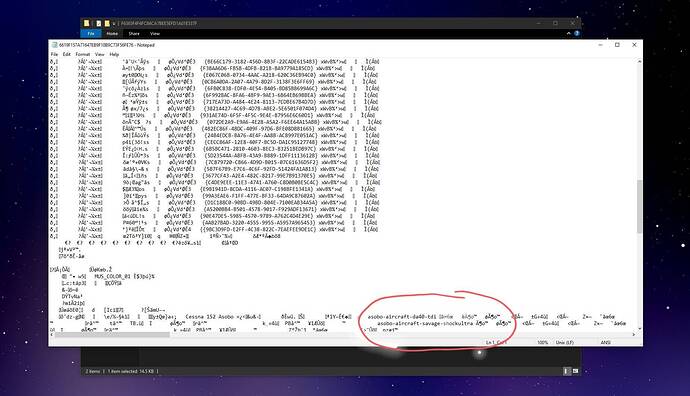 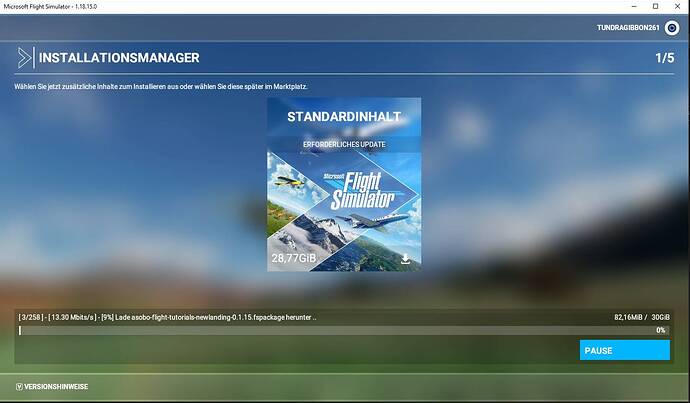 See you in a couple of days

(Poor me, I uninstalled all unneeded planes/airports/tutorials etc. a couple of days ago which now obviously will be redownloaded, if at the end of the installation the C152 and TBM will repear for me in the content manager all will be fine.)

Let us know if it is fixed for you. Seems like this clears out the issue in the cloud save.

I did it as well and I had an update of abt 3.76 GIB downloaded (Same kind of view than a.m TundraGibbon261). Now the content manager is showing basic files as completed and uptodate.
However, event if it’s working I’m now facing new bugs such as FPS drop during landing (Or just after landing) phase. Before I had this only within the training Gizeh flight.
Seems also that the landscapes are not as clean as before.

Could it be because of my other files containint garbage or being empty ?

Double check all your settings as they have probably been reset by doing this process.
That being said, su5 did bring with it some visual bugs so is likely related to that.
Doing this fix will not have affected sim performance.

Ok but possibly the update download might have had some influence on my personal system. Have checked at my setting already but will do it again should have I missed something. Will revert.

All my settings are clean. Exactly as before. So I think that the update has improved the problem of the missing mandatory message as well as the full download of all asobo aircrafts (Although I had the c152 and TBM from the very beginning) and is likely to have brought some other bugs linked to the U5 which (For reasons I can’t figure out) I did not have yet…Bloody mess indeed…

Can’t really fly well and hope that all this will be settled on 09/7.

Did it bring some new bugs in your installation ?

Sorry for the rather late response, it took some time to download the 30 gig.

I can now delete my 787 vcockpit folder aswell as the C152 and TBM folders and they will get redownloaded, no missing packages anymore !

Also my core content is now up tp date as well

But the C152 and TBM is still missing on the content manager, still only the liveries show up

Haven’t done a flight yet, so can’t tell anything about graphics, performance etc. yet

Awesome, sounds like its a confirmed fix. I think the c152 and tbm don’t show in the content manager as they shouldn’t be removed as they are mandatory (as we have discovered!!

Eventually owing to the possible problems of settings I decided to make a new full download. Amazingly this time everything went well and (although I was not initially missing both C152 and TBM) my new installation is complete showing all packages.
Sim starting normally within any further message about mandatory files.

All this without having done anything else than what we usually do to install the sim. Weird.

However bugs such as missing ATC sound, missing initial logbook, FPS dropping during landing phase are still there. Did not check about other possible one but will do later.

ASOBO basic C152 and TBM do not appear into my manager content as well but as andyjb1037219 says it’s most likely because they are mandatory and cannot be removed.

Will try some other flights and report.

Thks to all of you for your kind help anyway.