FlyByWire mods will be addressed by Asobo in the future?

The FlyByWire mods provides many options that the default A320 does not.

Will those FlyByWire enhancements be updated by Asobo one day, or will we have to keep using them forever?

The default A320 will likely see additional features enabled over time, and it will see more bug fixes. We are expecting a sim update to target airliners later this year.

However, I would not expect the default aircraft to reach the complexity of a quality addon like the FBW mod, or various other well-known addons like the PMDG737, QW 787, Majestic Q400 etc.

This is for a few reasons:

Here’s a screenshot to give some visual perspective. Make of it what you will

This is just a guess but I imagine it’s all hands on deck for the Xbox release at the moment. 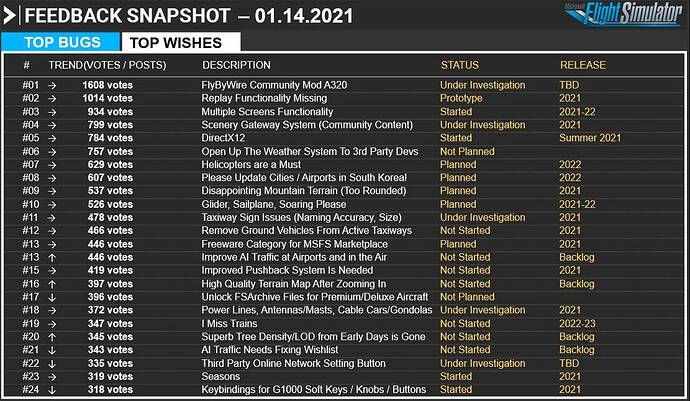 They also stated that they didn’t want to take away the “bread and butter” away from aircraft manufacturers that have been developing addons for years.

I think this is the key point. I don’t want them to try to be all things to all people. I’m primarily a hard-core simmer, and I want study-level aircraft like the Aerosoft CRJ, and the PMDG 737, and various GA aircraft I have flown in real life. The FBW team has done good work making the default A320 more realistic, but there is a limit to how far they can go without the addition of some core functionality and SDK interface to call it.

That same functionality is what the third party developers need. And Asobo has indicated that they intend to provide a lot of it in the not-too-distant future. It will clearly, however, be an ongoing effort over many years. Translated, that means the sim and third-party add-ons will only get better, and better, and better.

It’s an exciting time for sim pilots and for real pilots looking for immersive entertainment.

I think it depends on how their intention to work with the FBW team would be? I would be guessing that FBW team could provide with the codes for the NX mod to improve the default, and Asobo could just review those codes and approve it. So once that’s approved it goes to the default A320 as part of the patch.

I think this is the better way to go because it saves Asobo’s resources from having to deal with making new codes to improve the aircraft, while there’s already a team out there that’s already nautical miles away to improve the A320. I think it’s a redundant job to have both working on the same aircraft with different level of advancements. So instead if Asobo would just be responsible with approving the code that was provided from FBW, and once that’s done voila, an improved A320 officially.

Another kind of problem is: as Asobo, bringing the A320 into MSFS, you have to license the product. Every major change needs to be approved by Airbus. This is massive paper work. I do understand them beeing a bit carefull in doing to much change.

The other thing to consider is that the FBW mod is an unofficial alteration to a default plane. You can’t just take a default plane, apply a mod, then market it. It is as Neo said – the only way to go would be for Asobo to pay FBW for rights to the mod and incorporate it themselves. There are additonal issues with that.

Asobo has already stated their intention is not to provide study-level aircraft. And if they did pay FBW for the mod, now they would have additions that would clearly break with every update, and as Watsi said, it would now have to be Asobo that would have to fix it. And the FBW mod is specific to one plane only, so many of the changes would not apply to other aircraft.

I think Asobo is smart to stay away from building the same planes as the third parties want to do. The path to the future is to create the common system and flight functionality needed by all planes, whether default or third party. Expose that functionality through the SDK and voila! Aerosoft CRJ, check. PMDG 737, check. Maybe HotStart TBM port? Check. Name your favorite plane. Check.

Hurry up, Asobo! I just got myself really excited!!!

I agree with all of your points and gladly accept them. However, I think some of the anxiety that people ask is because the complexity isn’t even really there at all and in fact it’s a step backwards in some ways than previous versions of FS.

Yes, it’s still in development. However, me and a lot of the community is concerned how inaccurate the basics of the simulator are. Hence the question of how deep Asobo will take these fixes made by FBW.

Here’s hoping for the best. Cheers.

However, me and a lot of the community is concerned how inaccurate the basics of the simulator are. Hence the question of how deep Asobo will take these fixes made by FBW.

An example is the changes over the last few months that broke the autopilot, affecting something as basic as the turn to a new heading. And not of the PID or bank parameters could correct it. It was core behavior that was not exposed through the SDK or changeable via a config file.

An additional factor here is that people don’t understand what the FBW mod can affect. They cannot change the flight model or sim physics other than through unencrypted config files (with the above limitations). And while they can change the behavior and appearance of the cockpit instruments, they do so by writing JavaScript. This is code that gets called very frequently – many times a second. This can easily cause the CoherentDraw thread delays we’ve all seen, because the render engine is stalled waiting for the JavaScript to be processed.

The only long-term answer is that the sim needs to do all the heavy lifting under the covers in the engine core, and expose that functionality through the SDK and WASM interfaces. As SandBass points out, part of that core behavior and functionality is currently missing or incorrect. That includes the basic flight physics, full control over aircraft flight models, the AP behavior and interface, the flight planning engine, and the GPS and FMS functionality and interface control.

Wow. That’s a lot, but as SandBass said, many of us pilots in the community put a high priority on creating realistic flight physics and flight models. Mods can’t do that. Third parties can’t do that. MS/Asobo is our only hope.

Another kind of problem is: as Asobo, bringing the A320 into MSFS, you have to license the product. Every major change needs to be approved by Airbus. This is massive paper work. I do understand them beeing a bit carefull in doing to much change.

Extending that thought, does Garmin have to approve any changes to the MSFS Garmin Systems ?

If Garmin is OK with the current Garmin modelling of their GPS systems, I may never buy another Garmin product again …

As far as I know, the licence agreements Microsoft has with the various stake holders (Airbus, Boeing, Garmin etc.) have and probably will never be released. We don’t really know what their agreements are, or if they have different terms with each partner.

We don’t really know what their agreements are,

Thanks Sir.
I really could care less what agreement they have ( none of my Business), but I do expect the Sim Modeling of the manufacturer’s product, to be of a reasonable standard.

For example, the Garmin Ranges of GPS system in MSFS fall far short of working correctly, even for the parts that are modeled.

I really cannot imagine that Garmin signed off on them, in the state they currently are in, as they really make Garmin look bad… which cannot be good for Image or sales.

Do people really decide to buy Garmin product or not based on how it’s used in a Home Flight simulator?

Image is Important – If I find that the Garmin product is poor and frustrating in MSFS, when I go to say, buy a GPS for my car, I am likely to be influenced to avoid Garmin… especially if I believe that Garmin actually signed-off on the MSFS as being “Acceptable” to them …

You don’t use Android Auto and Google maps for your car? or the built-in SatNav systems?

So you’re likely to be influenced to avoid Garmin when you want to buy a GPS for your ‘car’, based on what the Garmin system is being used in a home ‘simulator’ for ‘flying’? Interesting logic.

What flight simulator has a “core flight model” that can be modified for each plane? Just like in any other sim, there is quite a bit that can be done with the flight model through the cfg files. Try comparing the FBW mod with the default airplane and try to fly realistic flight profiles, pitch angles, and speeds.

I do agree with you that there are a number of areas that are not yet open for easy manipulation by 3rd parties, like the ground model, icing effects, ground effect, etc., etc., but I am hopeful that these will be made accessible as MSFS evolves.

Image is Important – If I find that the Garmin product is poor and frustrating in MSFS, when I go to say, buy a GPS for my car, I am likely to be influenced to avoid Garmin… especially if I believe that Garmin actually signed-off on the MSFS as being “Acceptable” to them …

I think you are being a little dramatic here!

Its almost like saying that people choose their cars based on Need For Speed!

I very much doubt that when people choose systems for their REAL plane, they are going to base their decisions on how the Garmin (or even the plane) performs on MSFS!

Whats the purpose of having these agreements with Boeing, Airbus, Garmin etc. then in the first place, if they wouldn’t care looking like asses they could just let Adobo go ahead, no agreement needed? Sure there is a marketing reason behind it!

I am sure you cannot legally use someone’s Brand name without their agreement, so that is one possibility agreements are in place.

I think you are being a little dramatic here!

Its almost like saying that people choose their cars based on Need For Speed!

Easy, one word answer to that, that says it all about Image and it’s effect on sales :