For Rift S owners, which OpenXR is better? Steamvr vs Oculusvr

So far I have only used Oculus VR as the openxr for MSFS. I like to switch to steamvr to access cockpit size adjustment plus the OVR tool. I am worried steamvr and steam is another layer on top of what I am running, which might impact performance. Can anyone comment on the performance differences between the two and the general experience?

I have tried both and Oculus VR will be your most performant option. Steam VR still relies on the Oculus SDK to composite images and render to the Oculus device. So you’re essentially running both in a way and therefore will be more expensive if you choose Steam VR. I highly recommend using the Oculus Debug Tool to tweak resolution and FOV multiplier to help with performance. My rig is 3700X/5700XT/32GB and I can fly most GA planes (non glass cockpit ones) at 40 fps with medium/high settings in-game.

Thanks for sharing your thoughts. Performance reduction with steamvr is what I suspected, that is why I am reluctant to switch. After lots of tweaking, I reached pretty good performance using Oculus vr.
Guess I will miss cockpit size adjustment available from steamvr. Hope it becomes a native MSFS vr feature in the future.

Any chance you’d mind sharing what you have for the Rift-S. I am getting super disappointed with VR right now. There is definitely give and take here.

Generally the main advantage from a user perspective of OpenXR is being able to use your own headset’s native software, thus avoiding overheads and inefficiency.

Generally you can expect to always see slightly worse performance when using another system’s runtime as default, as it then requires eg both steamVR and Oculus rather than just oculus.

Certainly the case for me, G2 performs somewhat worse in the steam OpenXR runtime vs Windows OXR.

The caveat is that I end up having to use steam’s version regardless, as it’s the only way to get motion cancellation (using OVRMC) for my motion rig. I will say though that performance is seemingly better on newer versions than it used to be, or rather the drop is less significant.

What made the biggest improvement for me is setting following commands in Oculus debug tool CLI:
server:asw.clock30
service set-pixels-per-display-pixel-override 1.20
service set-Adaptive-GPU-Performance-Scale Off

Of course depending on your graphic card, you can adjust these numbers. Mine is RTX 2080.

Anything below half the headset refresh rate has given me a bad stutter. Rift S has a refresh rate of 80hz and so if you can hit 40fps, it should give the most stutter free experience. Does server:asw.clock30 cap the fps at 30? The best way to verify it would be by enabling the Performance Hud in the Oculus Debug Tool. An RTX 2080 is better than a 5700XT, so I am curious if the following settings in ODT yields better results for you: 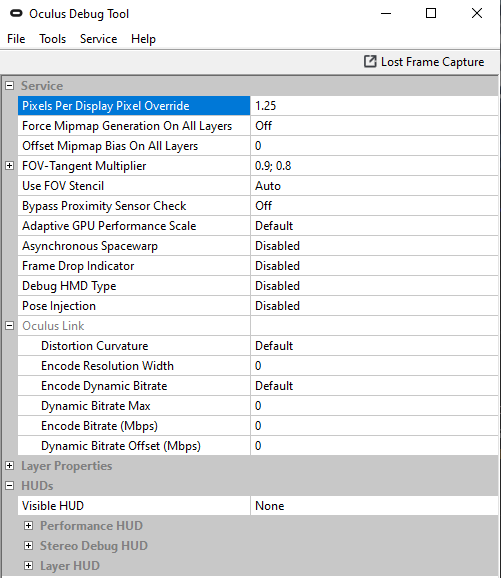 Yes. The performance hud of Oculus also shows 30fps. So is all other tools I can find such as NVIDIA and Xbox tool. BTW, I also limit 30fps in Nvidia CP.
I use Windows task manager to monitor the usage of GPU and the last core of CPU. Using both numbers as a guide to tweak various settings. When both usage is around 75-85% you get the best VR experience. If either one is approaching 100% then stutter happens and the other usage drops below 60%. The key to best VR experience is balance the two and avoid bottleneck by either one.

Thanks for sharing that. There has to be a difference in how Nvidia and AMD cards handle frame interpolation when stimulating 30 fps ASW since I get a bad stutter on my 5700XT. Also the fps in my performance hud is at 27 which makes sense since 80/3 is around 26.67. Default ASW mode Auto (40fps) or off still works best for me.

I target, and can mainly maintain, 45fps ASW OFF with my Oculus Rift CV1. With in game render scale at 70 and OculusDebugTool pixel density at 1.7. Very crisp, and I still have headroom on GPU side (average of 80/95% GPU usage).

I really can’t stand the basic implementation of ASW 1.0, too many artifact, so I can’t use lower asw30 settings unfortunatly. Even at 45fps, ASW ON is basically smooth, but those artifacts kill immersion IMO.
I hope one day they implement ASW 2.0 for all Oculus headsets!

What performance reduction are you seeing? Because I have been using the G2 using steam as OpenXR and had a much better experience. Same exact frame rates, but less crashes, the ability to switch between 2d and VR without crashes, and ability to set world scale.

Funny, this game is incredible at being able to provide different results for different people.

I saw around 10-15% less fps on steam’s runtime last time I measured it, using landing challenges as a relatively constant comparison.

Anecdotally from feedback on here when it came up a few months ago it seemed the majority of g2 users that tried it had worse perf, but there were always outliers then too. I was in fact just having a conversation on discord the other day with a scenery dev about being able to use OVRMC motion cancellation if he switches over, and he told me he can’t use steam OXR with his G2 without stuttering, crashing and lower perf. I don’t get an instability myself, but I do get the lower perf part.

@PilotOhmar @Johnkol
Guys, why not download Oculus Tray Tools? It’s a tiny app which allows you to access all the settings (and more) from the debug tool, as well as the performance monitors and other settings. You can set defaults you’d like Oculus to always use, and also different profiles for different games so that your custom settings get applied the moment you start the game instead of having to do it manually.

In FS2020 specifically you can even mess with the OTT settings on the fly and see their effect immediately, given that we have the option to enter/exit VR mode at the touch of a button. (A toggle is necessary to get the SS settings to apply.)

It really is a great little app for simmers (and gamers) who need different settings for each of their sims, and a lot more efficient than messing with the Oculus tools.

I have used it in the past, but stopped using it since all the settings I was tweaking were already in the Oculus Debug Tool. Also, since it is a third party tool, it is yet another place where things can go wrong whenever Oculus pushes a new update.

I’ve been using it for five years so far, and it has never once been the cause of any issue after an Oculus update. Or for any other reason, for that matter. And that’s coming from someone who until recently ran a sim-racing club three times per week, so I would definitely have noticed!

But it’s all good. I like the convenience and extras it offers, but we all have our own priorities. Each to their own.

I, too, started with OTT then switched to the debug tool after I found out OTT cannot hook onto MS store version of MSFS. Also it is one less process to run and one less potential source of problems.

OTT was useful at the beginning when VR apps didn’t have any supersampling settings in game. Now all the VR apps I own have integrated it, and MSFS is the only one I own where I need to fiddle a little with VR settings with Oculus Debug Tool, in fact just to force 45fps ASW OFF, and I automated this through a batch file I launch right before the sim. So yeah, OTT was a great help before, but useless for me now to have this additional process eating some CPU resource (regarding various way to catch the launch of an executable, and it can miss it sometimes).

I, too, started with OTT then switched to the debug tool after I found out OTT cannot hook onto MS store version of MSFS.

I don’t know why you are having issues with that, because it can and does. I have the MS Store version and OTT works every single time without issue.

But as I said, each to their own. It’s not like I’m trying to sell it to you.

I don’t know why you are having issues with that, because it can and does. I have the MS Store version and OTT works every single time without issue.

That is interesting. I found not only the MS store version cannot hook to OTT, but it refuses hooking to all other programs such as vorpX.

" Source of potential problems" simply means there are too many other settings in OTT that I don’t understand and don’t care, but prefer not to change from the default settings of Oculus. I have the uneasy feeling that OTT might modify something unknown to me every time it is launched. Also when it comes to troubleshooting and tweaking of MSFS, it is one less process to worry about and one less comparison of using it vs not using it.