Freeware - UK Channel Islands airports repaired, plus all of the islands terrain

Anyone who’s been to the Channel Islands in the sim will realise they’re yet another victim of Bing maps. I went there expecting soaring cliffs and it turned out every single one was totally flat, plus the main airports were lumpy, boring messes.

These files repair and embellish EGJJ Jersey and EGJB Guernsey and EGJA had to be remade to work with this mod.

Jersey, Guernsey, Alderney, Sark, Herm, Jethou and Brecqhou have all been lifted from sea level and thoroughly worked over in an attempt to return their proper topography, adding cliffs, hill and valleys where there were absolutely none before.

Was this a total success? Hmm, not really. The tools are just too crude and there are bits in there that were breaking the moment I repaired something else so I didn’t dare touch them any more.

This mod does however make it a more interesting place to fly around and makes the airports viable to use.

Thanks. Lovely part of the world I fly into in the Sim regularly. Much appreciated. Cheers.

Thank you for spending the time to do this. After high expectations, I was so disappointed to see the way that the Channel Islands were displayed - they looked like fields floating in a puddle. Naively I thought that this would soon be sorted by the Developers but I now realise that they have a lot of work to do in so many areas. I do a lot of flights from Southampton and the Islands are perfect for GA Flying - your updated scenery is a great improvement!

Aye. I don’t understand what went wrong and it could indeed take quite some time for them to repair it.

The really weird thing is if you fly 10 miles from Alderney to the French coast it looks absolutely fine. I’ve no idea why all of these islands have the exact same problem.

Thank you so much … such a vast improvement! I had a go at this myself and found the editor so frustrating, I couldn’t get it to work properly. It was also thousands of times (no exaggeration) slower than other game editors I was accustomed to. Splendid job! One very happy Guernseyman!

Glad you dug it. Update shortly with a fully finished Guernsey airport and it’s been raised a little too. Still lots to do elsewhere.

The developer thing certainly has its quirks. It’s been a long time since I played with anything similar but others seemed to have far, far simpler and better options for terrain in particular.

It’s worth sticking with though. There are regular updates just like the game and there’s lots you can do with it, albeit in a desperately clunky way. 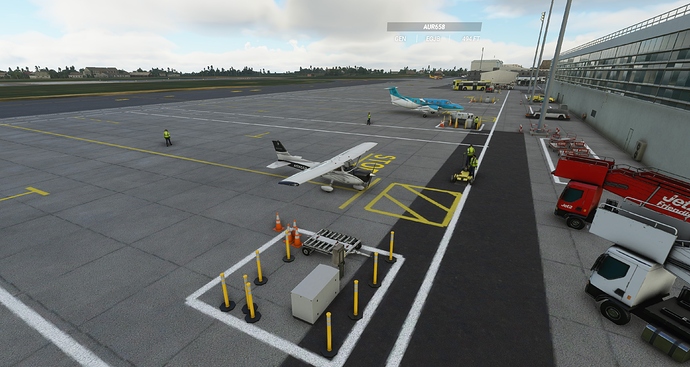 I may take the plunge again in the near future and have another dabble. I really enjoy modding games and FS2020 has so much potential. They do seem to have bunged a load of big buildings everywhere now … think their A.I. needs a few more tweaks, as it was doing fine a while back. I will look forward to your updates and thank you for dedicating so much time and effort to this … much appreciated.

Anyway Thanks a lot for your beautiful work, this place is one of the best in the world that I want to fly all the time. Great job!!

If you’ve just downloaded it I just updated it a few minutes ago with the better Guernsey airport, slightly better terrain around it and Alderney was missing its runway lights.

I could update this forever so I’d better hold off until I’ve done a lot more next time.

Here’s a flight around my 'hood! (I didn’t include Alderney or Jersey, but they look great too). 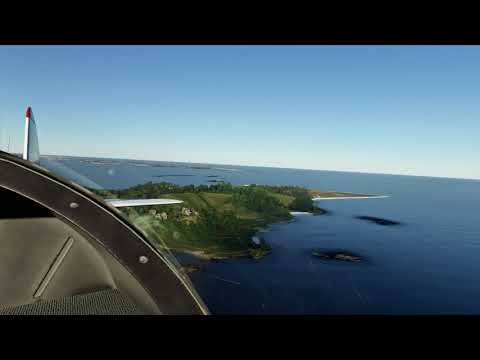 By the way, just in case you haven’t found out yet, you can correct the buildings that are too high / big by going into your Content Manager and getting the tiny updates they recently provided for the Japan content. It’s not intuitive, but getting this update fixes the big building bug across the globe, not just in Japan

It’s fun seeing it out in the wild.

Thanks for the tip. I kinda like the ludicrous buildings myself.

My biggest disappointments are La Coupee on Sark and much of Alderney.

The narrower the thing you raise is, the more likely it is to glitch. La Coupee looked fine when I finished it. When I ran it on another computer it was simultaneously sunken and covered in spikes but oddly it looks OK for you.

That’s why I had to give up on the docks and rocks too.

Most of Alderney is where I met the biggest limitation of the current tools - when two terrain tools at different heights meet they just mindlessly butt into each other with no effort to integrate.

You either end up with jagged walls, strange pitted sections or if you hit it with enough falloff to look natural the sea is pulled up or something else breaks.

The only officially bendy thing you have to play with is a rectangle which creates yet another set of walls. I think I might start that again from scratch when I return to it.

I found the free-form polygon tool the most useful when I was experimenting, but it did occasionally develop its own consciousness and run amok, generating massive faults and strange cliffy bits where I wasn’t editing. I suppose things must have improved now, so I ought to stop whining and try again. I do miss being able to add rocks as pre-fabs though. You could do this in the Far Cry 4 editor with considerable ease and scale / rotate / overstamp … creating many wonderful rocky scenes. The Channel Islands are famous for their reefs and rocky outcrops … it’s a shame we can’t easily model them in this editor. Still, this is a giant leap forward in immersion, so we mustn’t be too petulant!

There are rock objects in the object list to select but they’re very limited in number, 15 ish.

You can do a lot with rescaling, combining and burying them but the saminess can become obvious despite that. I stuck a few down in the sea but I may have a play elsewhere.

This makes an enormous difference over the default Channel Islands in MSFS. Great job and thank you so much!